Telstra has renewed prospects with their new corporate structure and T22 strategy. We recommend investors to "Watch" for a lower entry point.

Telstra Corporation (ASX: TLS) as every Australian knows is a telco company. They operate in 4 segments – Telstra Consumer and Small Business, Telstra Enterprise, Networks and IT, and Telstra InfraCo. Hated by their customers and then their investors, Telstra has finally decided to change from within by first fixing its broken corporate structure.

Telstra shares have been all over the place in recent years. Since the pandemic, the story has been relatively the same. We see periods of growth in share price, followed by a consolidation. In the 5-year stock price chart below, we can see that Telstra has massively underperformed the broad ASX 200 index (orange line). However, since the beginning of the year 2021, Telstra has outperformed the ASX 200 as expectations are once again rising on the back of the corporate structure change that the company is undergoing. 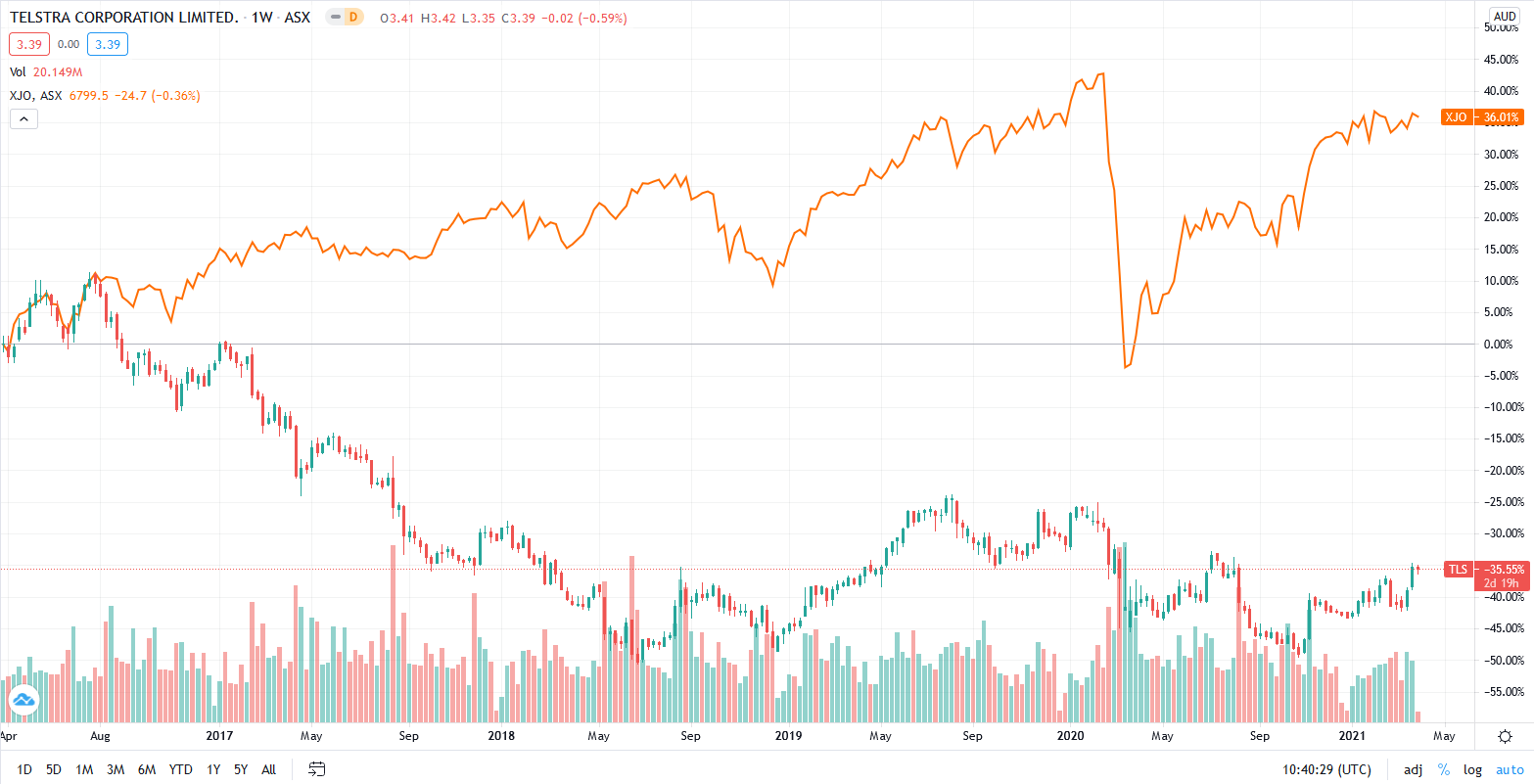 Telstra has been an awfully managed business for the past 5 or 6 years. We and Telstra had known for years that their copper cables will be replaced with fibre optics and will hence result in declining margins and a declining business. While they knew this for a decade, Telstra sat on it and did not do anything until it was too late. Nbn was a mess and Telstra squeezed the government for a ton of money only to later pay the shareholders with that money instead of reinvesting it wisely. Profits thus started eroding and we have been seeing millions disappear from Telstra’s Profit and loss account. In order to fill this gap and try to reinvest, Telstra began buying high-margin businesses in Australia and other parts of Asia. This strategy however did not pan out, and the biggest reason for the fall of Telstra was the inability of their management to recognise the fact that their business has to be transformed.

In November 2020, Telstra announced that they will be restructuring their organisation into 3 separate legal entities. It was greeted with positivity by the markets and Telstra shares finally gained an upward trajectory from a slump. The restructuring will enable Telstra to segregate their assets and separate their infrastructure business from their services business – which should add more value. Once the restructure is completed in December 2021, the entities would be:

InfraCo Towers – Operate Telstra’s passive or physical mobile tower assets, which Telstra will look to monetise over time given the strong demand and compelling valuations for this type of high-quality infrastructure.

ServeCo – Own the active parts of the network, including the radio access network and spectrum assets to ensure Telstra continues to maintain its industry leading mobile coverage and network superiority.

The restructure will essentially transform Telstra into a holding company where shareholders will be invested into 4 separate businesses – Infrastructure business, Towers business, Mobile services business, and Telstra International. 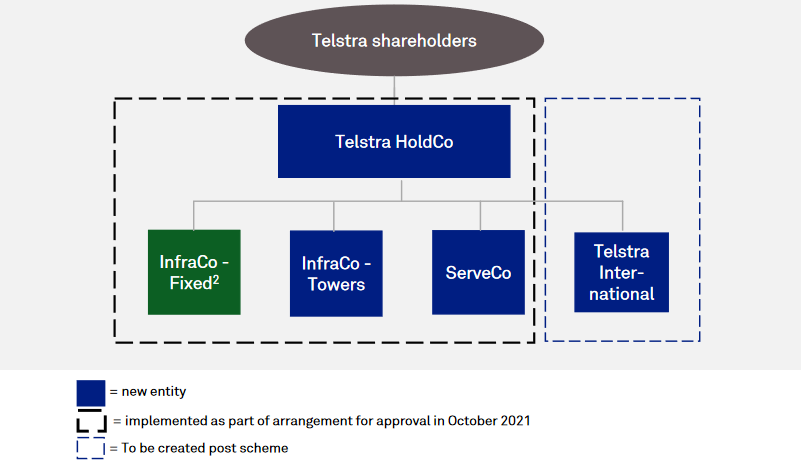 The reason why this restructure is so critical is because it will enable Telstra to split up the businesses and then go about disposing of the non-performing ones. It will also allow the company to pay dividends from their infrastructure and towers businesses, and when it comes to services – a fairly growing sector, Telstra will now have the leverage to reinvest and drive growth and not be bogged down by dividend payments to shareholders. The asset values of Telstra’s infrastructure and Towers are very large and worth billions of dollars and the restructure will mean that Telstra will finally have a chance of unlocking its potential.

After the announcement of the change in corporate structure at Telstra, there has been a few noteworthy announcements:

The half-year result has been similar to all the preceding results – a disappointment. But this is not why the Telstra shares are once again rising, it is all about their T22 strategy and corporate restructure that will enable them to finally deliver positive results by efficiently operating and leveraging their assets.

The largest contributors for the decrease in EBITDA were – nbn headwinds and the impact from Covid19. More evidence that the failure of nbn and its infrastructure is weighing heavily on Telstra and why the change in structure and T22 strategy is so highly anticipated. The income by all products that Telstra offer can be seen in the picture below:

Telstra’s mobile strategy continued to deliver increased customer numbers on mobile. During the half, Telstra added more than 80,000 postpaid handheld mobile services with healthy performance across all segments and brands. It also added more than 46,000 unique prepaid handheld users, and more than 163,000 Wholesale mobile services across prepaid, post-paid and IoT services. Revenues from the mobile segment declined mainly due to the impact on international roaming as borders stayed shut and also the general reduction in lower hardware sales as people refrained from buying new phones. It shows that there is still growth to come in the mobile segment. The rollout of 5G and Telstra’s plan to cover more than 50% of the Aussie population across 100 cities and towns will give the segment a boost in revenues in the future.

The growth in the mobile segment will bring in more recurring revenues at high margins compared to the nbn business because Telstra can still operate like a monopoly in the 5G space with over 50% of the country under its radar. The shift in strategy to own 100% of their retail stores will aid in reducing Churn rates and hang on to customers for longer – resulting in an increase in average recurring revenue.

Growth in the telecom sector is very hard to come by. This is not just in Australia, but a global theme. It is due to the structural decline. The room for growth for Telstra will be in the mobile services segment by leveraging their Towers and Services business optimally. This essentially means that revenue growth will be hard to come by in the following years. However, there is a far more important metric that the T22 strategy is looking to improve – EBITDA and EBITDA margins. This is where Telstra’s share price gains will come from as well. The T22 strategy will bifurcate its assets and give Telstra an option to get rid of or stop the infrastructure assets from weighing down on its towers and services business.

Assuming Telstra will meet its full year update guidance for FY2021 and assuming a flat growth and greater operating efficiency as a direct result of its T22 strategy and cost cutting, we forecast Telstra’s EBITDA to finally start improving after over 5 years. This will result in a high EBITDA margin of around 31% by the end of FY2023. Telstra’s profitability is finally forecasted to increase. This forecast is based on the company successfully managing to restructure the business and also considers conservative forecasts for its EBITDA growth over the next 2.5 years. 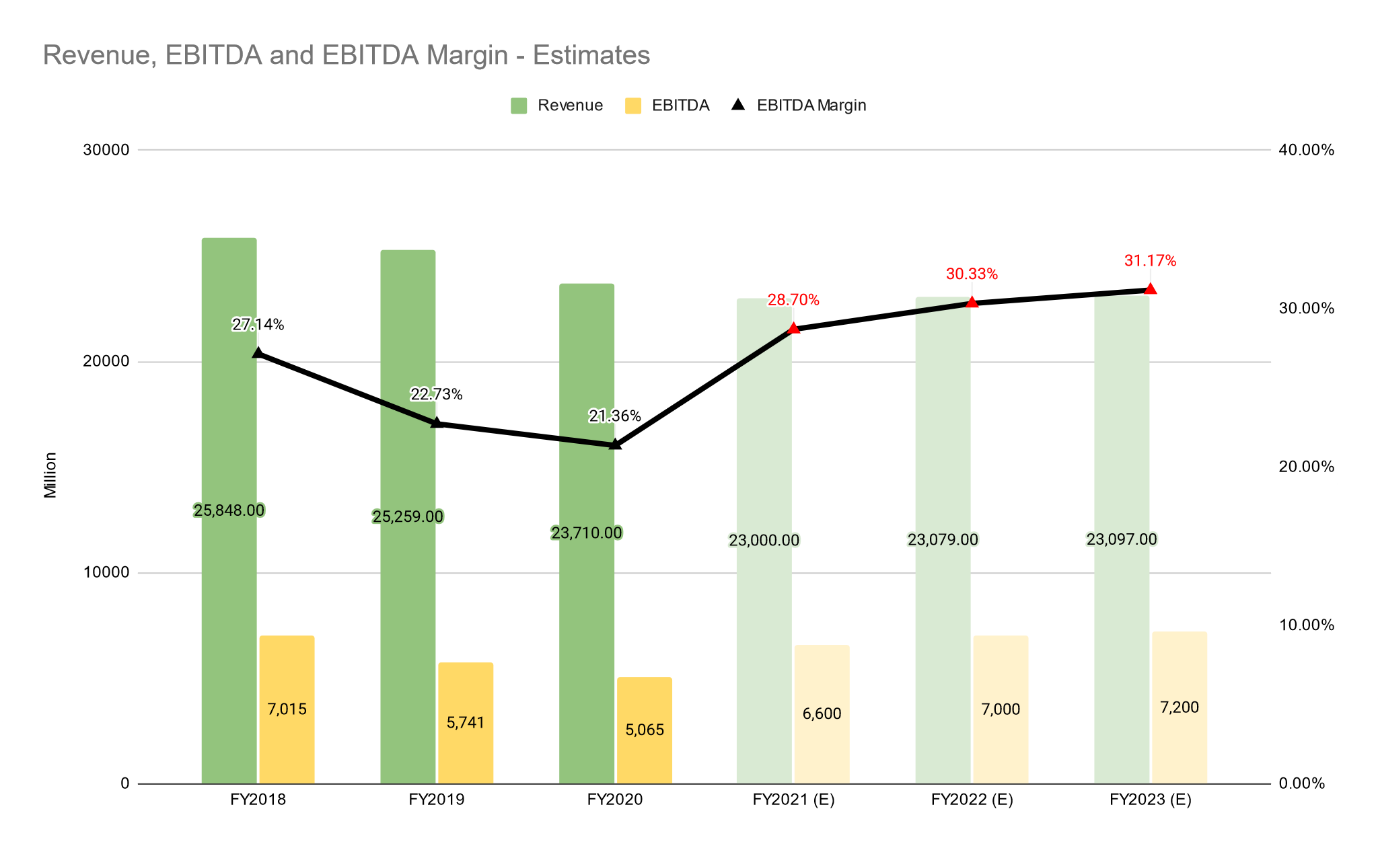 Following on from the restructure, the ball will once again be in the court of Telstra’s management. They will have a decision to make – continue paying high dividends or finally start reinvesting the profits into the business in order to sustainably grow the company. This is an area that the management has historically taken bad decisions, however, with the restructure and its T22 strategy, it will be make-or-break for CEO Andrew Penn and the market expectation seems to be that the entire T22 strategy is based on reinvesting profits and growing Telstra as a business. The chart below will show you why they are so critical regarding Telstra’s dividend payouts. Over the past 4 years, their normalised EPS has continued to decrease, however, their high dividends have always caused a structural problem for the firm – finally contributing towards a slaughter of the share price in recent times.

Going forward, the higher earnings from greater operating efficiency will mean that Telstra may be able to continue paying a relatively high dividend, as is the case with 16 cents full year dividend guidance that has been issued. 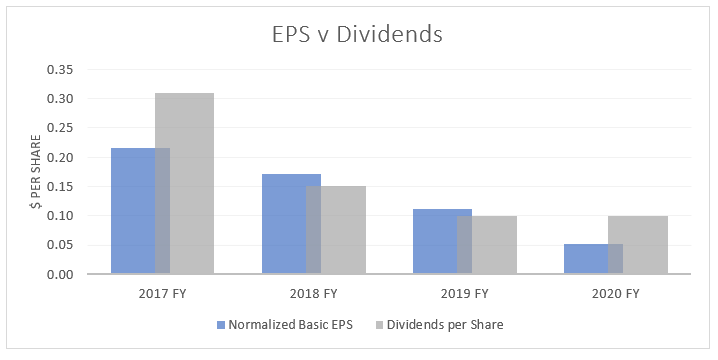 Telstra’s momentum and renewed confidence in the markets is a direct result of the prospective increase in EBITDA and profitability after the restructure is complete. The higher profitability will result in sustainability of its high dividends and also allow Telstra to invest in the mobile service segment to deliver growth. The future now looks brighter than it did prior to Telstra initiating its T22 strategy. We recommend long-term investors to “Watch” Telstra and take up a position on a pull-back.