Talga has loads of potential and we continue to recommend members without exposure to "Buy".

Talga Resources or Talga Group Ltd, (ASX: TLG) as it is now called has been one of the success stories in the past month. Since our buy recommendation on the 21st of October for a price of $0.93, the stock has been surging and continues to do so. It currently trades at $1.90 as of writing this report – translating into a 104.3% return in less than 4 weeks.

For those of you who forgot what they do – Talga mines graphite and then develops graphene products such as battery anode and additives for applications such EV. It has significant competitive advantage because Talga operates its own mines and its deposits are the largest natural graphite found in Europe. With a huge mine and a completely green manufacturing facility both located in Europe – the fastest growing battery market in the world, Talga is ideally positioned to be an essential player in the continent at a time when the world is taking huge strides to go carbon neutral. 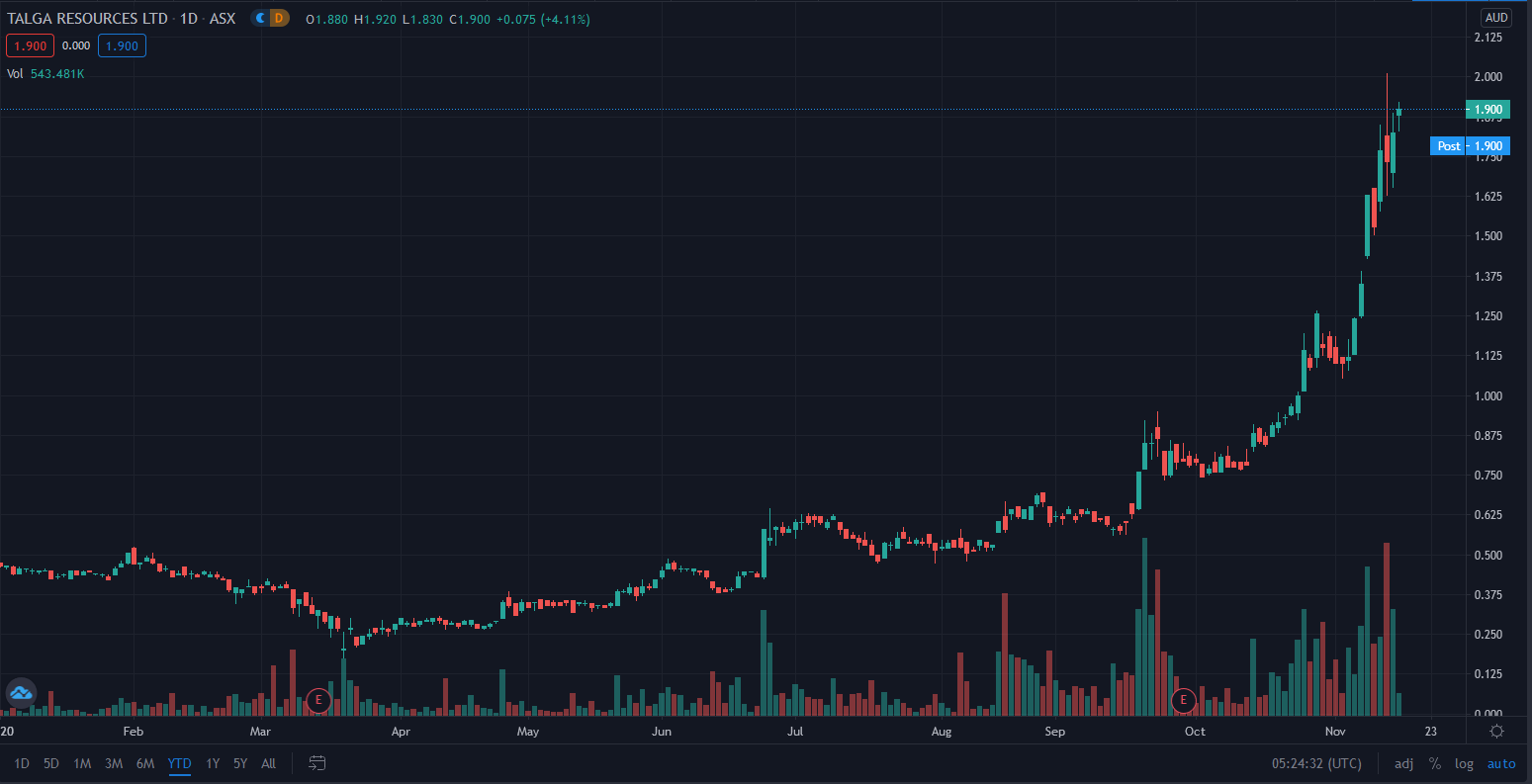 Talga recently announced that it has received grant funding from the UK government to complete the preliminary feasibility study for the commercialisation of Talga’s Talnode-Si in the UK. The firm has been awarded $520,000 under the Automotive Transformation Fund. The study is estimated to be completed in the first half of 2021.

The UK government has also committed a sum of $1.8 million to Talga for the boosting of its domestic EV market. The money is to be used for the commercial feasibility of a UK refinery to produce Talga’s Talnode-C product that is used for Li-ion battery manufacturers. The study is scheduled to be completed by March 2021 and will provide the UK’s EV industry with anode material. A lot of customers in the UK are known to have already expressed support for the study and it looks like Talga will have no problems selling their product upon manufacture.

LKAB, Sweden’s state-owned mining and minerals group, along with Mitsui have joined Talga to jointly develop the Vittangi anode project following the DFS (detailed feasibility study) that is due completion in Q1 2021. The agreement will enable synergies across infrastructure and operations. Given that Talga is yet to commercialise, the agreement will also ensure investment and a distribution channel.

Since our initial report, the quarter activities for September 2020 was also released by the firm on the 30th of October. Talga ended the quarter with $12.6 million in cash and it has sold the WA gold royalties to Trident. Talga’s electrochemical exfoliation process has been granted a US patent.

Vittangi has seen a 15% increase in the total natural graphite resources from an updated mineral resource estimate. The anode project has proceeded directly to the commercialisation phase after positive outcomes were received from the detailed feasibility work.

When considering investing in a high-growth company, the biggest things to consider are – the market opportunity, and whether the company can execute their product/service and grab the opportunity. The two go hand-in-hand and firms rarely nail both of these.

The total addressable market for Talga is incredibly huge. The shift in dynamics favours them, and it looks more and more like this is our future. The biggest market that Talga can target is the EV market and it is estimated to grow by 7x by 2030. Europe is also the best place to be in order to take advantage of this shift to a sustainable environment as it is far ahead of geographical regions.

The demand for battery as a result will increase with both the demand for EVs and new legislatures that will accelerate this process. The forecast for the battery requirements by materials can be seen from the below graph. Graphite is the most in demand material and by 2029, it is estimated that approximately 3.2 million tonnes of graphite anode will be required. This is a jump from 600,000 tonnes today. 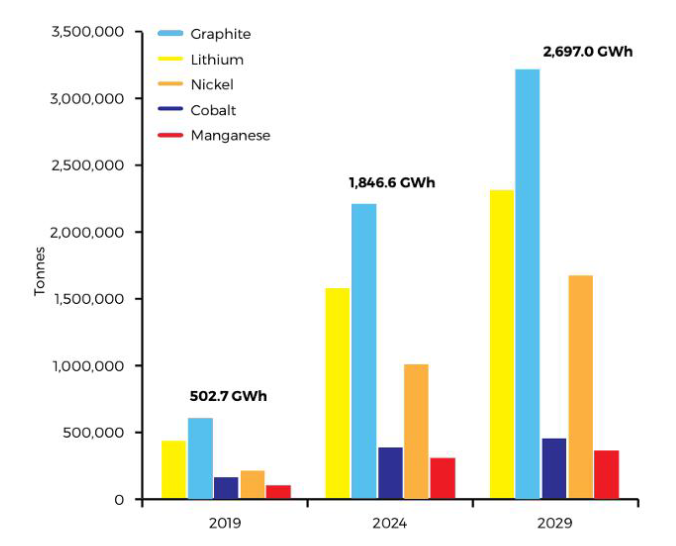 Talga’s growing partnerships from some of the biggest players in the space and government grants show that this shift in dynamics has already started. We have already emphasised how important it is for a European producer to emerge in our previous report.

To meet the demand, Talga is mining graphite and producing one of the most sustainable and low-cost anodes for Li-ion batteries. They have a very highly concentrated supply structure, and they can offer their customers a customised feature for their products as Talga directly sells to the end users in this supply chain.

Graphite from the Vittangi project will go to a new facility in Sweden that is currently being constructed. For 22 years, 19,000 tonnes of anode per annum is expected to be produced from 2023 onwards. The total reserve of the Vittangi Anode Project is 1.9Mt. The Niska Expansion has a graphite reserve of 6.5Mt and development options are currently being defined. The scoping study is due this month.

Expressions of interest have been received for over 300% of planned capacity. Expansion projects are thus being scoped for a far larger scale in the near future. The pre-tax annual revenue estimate is US$188 million with an internal rate of return of 55%. The results from the PFS study if Vittangi project can be seen below:

Talga’s resource and strong ability to process and produce anode from its in-house product technology increases its moat in the industry and raises high barriers for other players to enter this market. Talga are able to ensure a low-cost and easily accessible product that is produced with very low emissions.

The Vittangi project has the below advantages:

The market is there for the taking. Talga now has to go through its timeline and tick all the boxes in its road towards commercialisation. They have a very good reserve and resources of graphite and facilities are being built to manufacture battery anode from these resources.

The Niska expansion scoping study is currently ongoing. While there is cash in the bank, further funding for full scale developments is required in the future and is expected. Offtake and commercial partnerships with customers are estimated to occur during 2021. Feasibility studies for Talnode-C and Talnode-Si for the UK are also expected in 2021.

Talga’s strategy is clear-cut. It is in its development stage currently and it is expected to continue until 2022. The construction of its EVA plant, Talnode-C qualifications and acquisition of mining permits are expected to take place during this time. Considering the huge demand that is already being seen, we expect offtake agreements as well.

Next, from 2023 onwards, Talga will move into the commercialisation stage. Supply of batteries to European megafactories, Nunasvaara South production, and Niska expansion permits, and developments are expected. Following this, Talga will then be in a position to expand and drive growth.

No new financial reporting has been done since our initial report. Thus, the analysis of its financial metrics stays the same. In addition to the financial analysis, members can also read in detail about Talga’s products and its alignment. We urge you to take a look at it by clicking here prior to making an investment decision.

The total reserve and resource from Talga’s deposits can be seen from the below image:

Talga Group has returned very high numbers and its best days are yet to come in the future. It is currently still in its very early stage and it is in line to meet its milestones. We continue to recommend members without exposure to “Buy” for the future and members who are already holding it, to continue to do so.