Retail Food Group’s recovery is progressing better than previously imagined. We issue a “Speculative Buy” recommendation to investors with a high-risk appetite.

Retail Food Group (ASX: RFG) is a food and beverage company that owns a multi-brand retail food franchise business in Australia and internationally. It operates through Bakery/Café, QSR, Coffee Retail, and Di Bella Coffee segments. The company engages in the ownership of intellectual property; development and management of coffee roasting facilities; and the wholesale supply of coffee and allied products. The company operates a network of approximately 2,400 outlets and is Australia’s largest multi-brand retail food and beverage franchise owner. Retail Food Group operate some of the most well-known brands Down Under – Michel’s Patisserie, Brumby’s Bakery, Donut King and Gloria Jean’s Coffee.

Retail Food Group has gone from an ASX-200 stock to an ASX small-cap in the space of less than 3 years. They were run by an incompetent management team that made a series of bad errors during a time when competition was already affecting the company. Without going into further detail and turning this report into something it is not, the story now, has shifted to the turnaround that the firm has managed. They have a revamped board and the leadership team have quite literally outdone themselves to recover a company that was on the verge of a collapse. 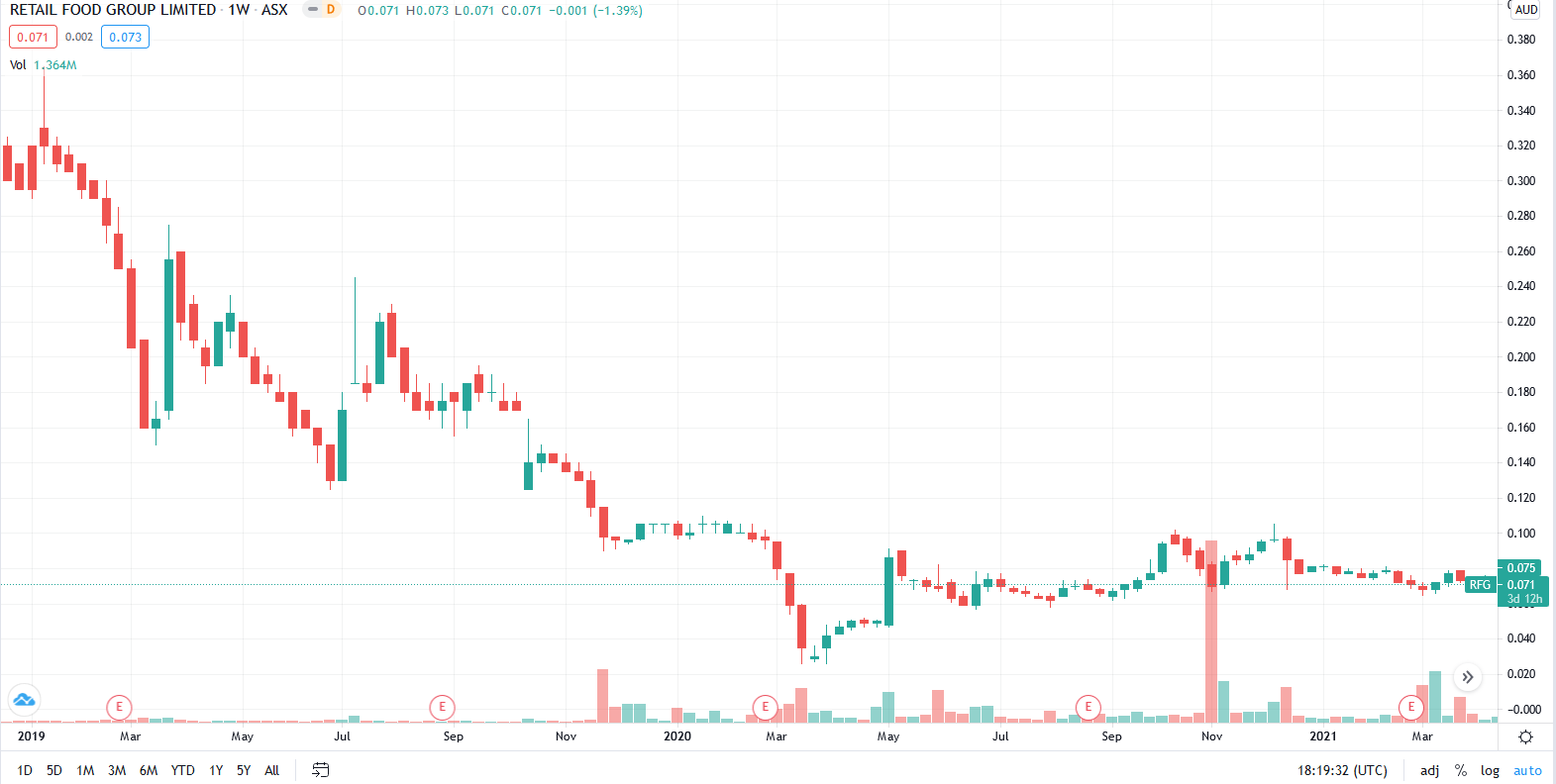 Retail Food Group run a franchise business that interacts with over 17 million Australian customers that generate over 70 million transactions. Close to 67% of our population transacts at one of the company’s franchise outlets in a given year. Their network is huge and they Australia’s largest franchise owner despite all their troubles.

The transformation’s main objective was to reduce the debt burden of the firm. After close to 2 years of extremely cautious and near perfect execution, the management are turning things around. Retail Food Group have managed to let go off their loss making franchises and concentrated on operating efficiency. Despite the pandemic wreaking havoc, the firm have had a fairly positive financial performance in H1 FY2021.

At a time when the pandemic set most industries on fire, especially the hospitality industry, Retail Food Group has performed well considering the challenges. The firm reported 1H21 underlying Net Profit After Tax (NPAT) of $12.0m, representing a 60.0% increase over the prior corresponding period (PCP). This result was underpinned by 1H21 underlying EBITDA of $14.4m. Statutory EBITDA of $12.2m recognised restructuring costs, non-cash lease impairments and a loss on disposal of the non-core Dairy Country business. Statutory NPAT for the period was $3.9m (1H20: $13.9m), increasing to $8.6m when discontinued operations are excluded.

A number of positive indicators were being observed across RFG’s business, particularly in Brumby’s Bakery, the QSR Division and outlets situated within regional locations. These have partially offset the impact of COVID-19 on operations with high exposure to shopping centre locations, metropolitan and CDB regions, where government social distancing and trading restrictions have had a more enduring effect. 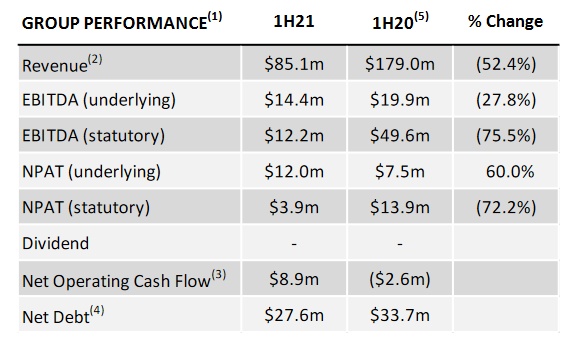 The initiatives taken by new management over the last two years include:

The Group’s ‘franchisee first’ focus saw the 1H21 restructure of the Company’s retail management and field teams under a dedicated internal division redefined as IconicCo. This restructure reinforced the importance of relationships, and the refinement of a model dedicated to improving store operations and franchise partners’ profitability. The General Manager for each brand is now directly responsible for relationships with the franchise partners and the firm are ensuring to provide timely and accurate support. This change has been complemented by the 1H21 rollout of new specialist field team, which has been deployed to drive improved revenue and profit outcomes for each of our franchise partners.

The further restructuring of the business will allow for more transparency and decrease the burden and challenges imposed from the 2018 business model:

Retail Food Group is disposing off its non-core Dairy Country business. This will drive towards an enhanced focus on core franchise & coffee business and the below advantages:

The ACCC commenced Federal Court proceedings Dec 2020 following over 2.5 years investigation on entities which operate the Gloria Jean’s Coffee, Michel’s Patisserie, Brumby’s Bakery and Donut King brand systems. The proceedings concern allegations that are historical and which occurred under various senior executives who are no longer with the Company. The ACCC is seeking declarations, injunctions, pecuniary penalties, disclosure and adverse publicity orders, a compliance program order, non-party redress orders and costs. While it is not currently possible to quantify the financial implications of the outcomes being sought by the ACCC, it is affecting the curtailing of new outlet growth for the firm.

The ACCC proceedings still continue to pose the largest risk for RFG and their shareholders.

Reduction of provisions reflects restructuring activity completed in the ordinary course of business & early settlement of operational matters on favourable terms to the Group. Borrowings have decreased upon repayment of debt during the period. Derivative liabilities have reduced as interest rate swaps were cancelled & paid out during the period.

These factors have increased cash reserves of RFG to $43 million but reduced their total assets position to $388 million from $437.5 million in the previous corresponding period. On the liabilities side is where the actions and strategy employed by the new management can be seen working to full effect. The total liabilities have reduced by $53 million to $208 million. These changes have resulted in RFG being in a net asset position of $180 million.

The debt profile has improved as well. RFG has been fully compliant with all the covenants as of December 2020.

The borrowings have thus decreased as the firm have repaid debt during the period. Current debt of $10 million represents amortisation of facility commencing quarterly from March 2021.

Retail Food Group’s recovery is progressing better than previously imagined. However, there are still roadblocks ahead with the ACCC still breathing down their neck. The debt profile has been improving and while the revenues and earnings are not quite growing yet, the operations are smoothening. The strategy is to stabilize and then move forward, and it’s a case of buying opportunity when the stock is down. We issue a “Speculative Buy” recommendation to investors with a high-risk appetite.