Regis has an exceptional outlook. The firm is pushing for growth amid high gold prices. We issue a "Buy" recommendation.

Regis Resources Limited (ASX: RRL) operates two gold projects – Duketon and McPhillamys. Regis is an industry leader when it comes to producing gold at a low cost. The all-in sustaining cost or AISC as it is widely known is just over $800 per ounce for the year 2020, making it one of the lowest cost producers globally. The below picture shows a comparison to other players in the industry.

The growth forecast for Regis is high. On the back of an exceptional performance in FY2020 and high gold prices, the stock has surged to record highs in July. However, since then, it has stalled as is the case for the commodity.

Regis has delivered a net profit of $200m with a 26% margin and 24% return on equity in FY2020. The firm drove growth in by beginning production from 3 new open pit mines and increasing the production in its underground mine – Rosemont. In light of the brilliant performance, Regis paid 16 cents per share in dividends.

Recently, gold prices have tumbled and has steadied in the past week. The talks of a stimulus package in the United States is positive news for the commodity as gold is used as a hedge against inflation. Devaluations and weaknesses currency also trigger investors to head towards gold as a hedge. Hence, a bull run for gold is expected due to more stimulus being pushed into the economy in a desperate need for quick recovery.

The McPhillamys development application which was submitted is close to completion, and we expect growth to be delivered from FY2021. The McPhillamys project is one of the largest undeveloped open pit gold projects in Australia. The reserves are over 2.02Moz with a 15-year project life.

While McPhillamys is a new project that will drive growth, existing underground and open pit projects that are active – such as Garden Well and Ben Hur will also contribute to the performance of the firm as a part of its growth strategy. Regis is looking to spend around $35million on exploration in the Duketon Regional Satellites, Duketon Expanded Greenfields, and NSW Regional Satellites – Bald Hill. This budget is a 32% increase and will triple the exploration tenure around the Duketon operations.

The low AISC of about US$ 800 per ounce and the soaring gold prices shows how big Regis’s margins are already. We estimate a bull run for gold coming as the pandemic is still not under control in the US and continues to exert pressure on the economy. The uncertainty surrounding the upcoming elections will also play a role – as volatility in markets will increase.

Regis’s forecast for FY2021 is positive. The firm is investing for growth and hence guidance posted is high. The firm is believed to be targeting gold production of 355,000 – 380,000 ounces at an AISC of A$1230 – 1300 per ounce. Growth capital of A$50 -60 million that will be used for mining costs has been allocated in addition to A$35 million towards exploration. The McPhillamys project will alone receive a minimum of A$15 million in FY2020 for further development.

The past performance surrounding production and costs can be seen in the image below. We expect the firm to meet its guidance numbers and continue its growth. 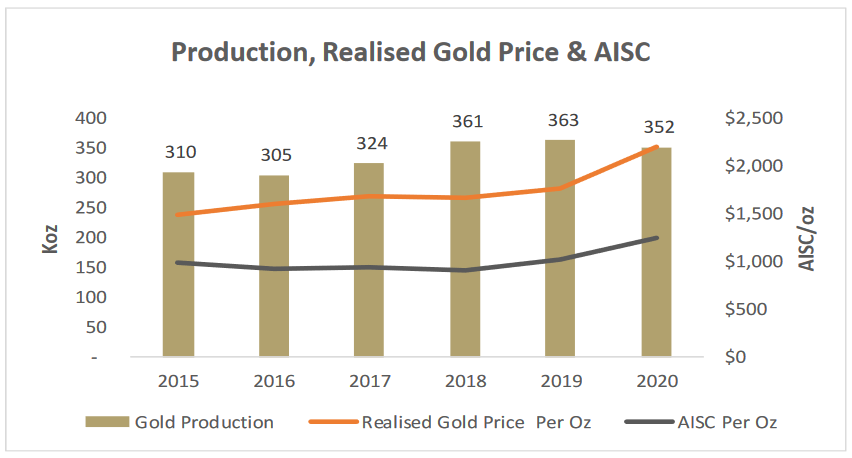 Financially, the firm is in a very strong position and will be able to sustain risks that may be thrown its way without damage to any of its assets – the credit default risk is extremely low. The equity portion in its capital structure is high – with 95.7% and the rest is debt – a mere 4.3%.

Investors looking for further information on RRL’s financials are urged to look at our past report that was done on the 16th of September, 2020.

Regis’s outlook is positive. Strong growth is expected, and it will only get stronger if we see a bull run for gold in the near future. With a healthy balance sheet and a sound growth strategy, we issue a “Buy” recommendation to both – new investors in Regis and members looking to top of existing holdings.