An exceptionally well run company operating predominantly in the USA and Europe, and is perfectly positioned to drive growth.

Redbubble Limited (ASX: RBL) is an online marketplace within the ecommerce industry that connects artists with shoppers. It works on a simple business model where artists can create art that can be printed on to various products and purchased by shoppers. From this transaction, the artists receive a kickback from the sale of their design or IP, Redbubble fulfills the order placed by a shopper by taking care of the printing and logistics. Hence, it is a flywheel-based business model that benefits from network effects. The picture below demonstrates the flywheel business model that Redbubble has adopted.

Redbubble does not focus on bringing the greatest number of customers they can unlike most other marketplace firms. They instead focus on bringing more artists on to the platform so that they can have the largest collection of art/designs on offer. This ensures that Redbubble will remain the leading print-on-demand marketplace for individual artists, then the customers will come. This strategy sets Redbubble apart and it has worked very well so far. 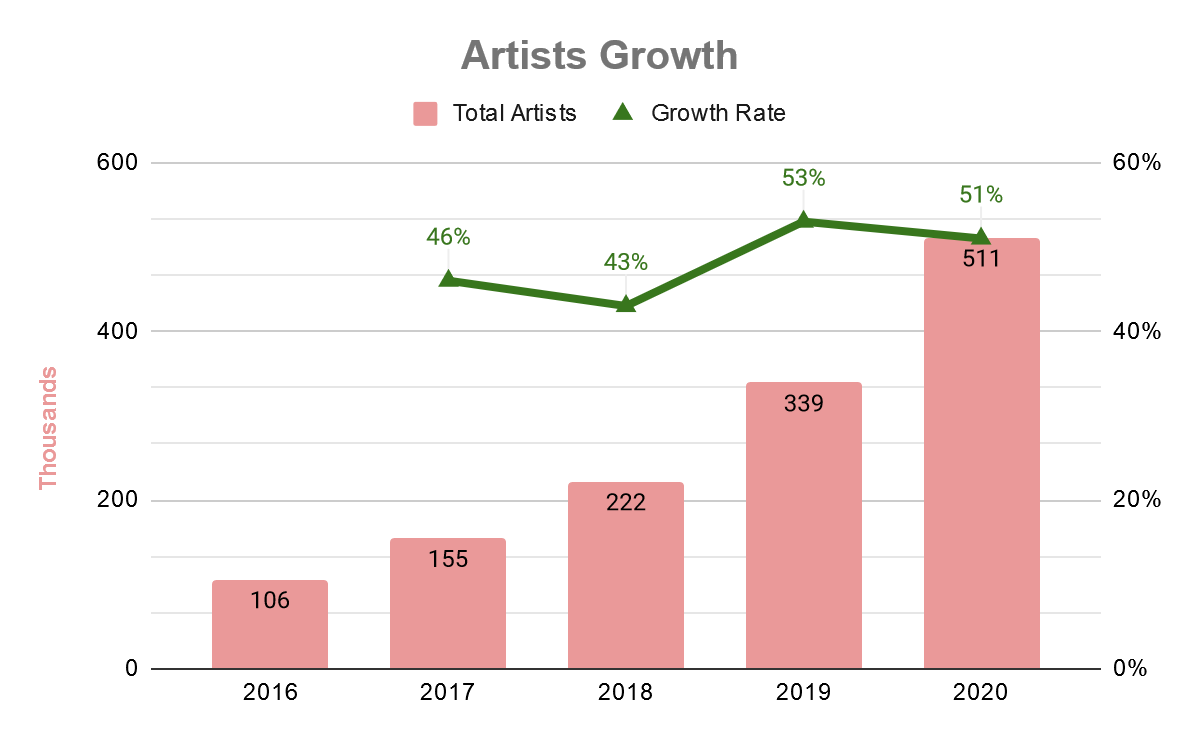 As at the end of FY2020, the Redbubble marketplace was home to:

Along with a dynamic business model, Redbubble has built a marketplace that enables network effects to kick-in. The broad fulfilment network that the firm prioritises on ensures that an artist down under can sell to a customer in the USA. 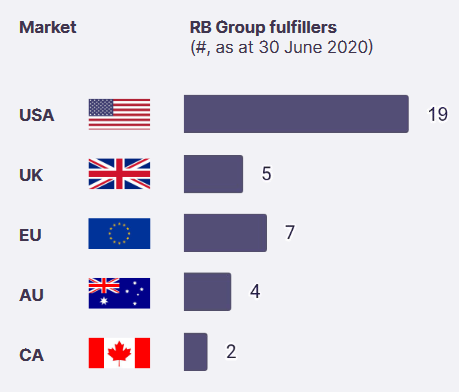 The development of the fulfillment networks has the below benefits:

Redbubble uses third party fulfillers for their marketplace. This enables competitive pricing among the fulfillers – ultimately benefiting the end customers. Supply chain disruptions did not therefore affect Redbubble as it did to most other firms. Fulfillment networks in local markets have proved to be a master stroke for the firm.

The Redbubble stock as a direct result of its flywheel business model and the growth in ecommerce in consumer heavy markets such as the USA and Europe has skyrocketed in the past year. Once flying under the radar, RBL has returned 544% in the past 1 year and 52% in the past 3 months.

The stock has however, been subject to volatility by selling pressures mounted on it every now and then. But the general tailwinds that are in place for the industry and the firm has ensured that they still maintain an overall positive trajectory.

The spike and drop during October and November were due to the Redbubble releasing a very positive Q1 result for FY2021. Wherein, the firm reported over 100% growth in Q1 revenues and gross profits. The drop was attributed to the then CEO leaving the firm and selling his shares – a sign that is more often than not met with downward pressure on the stock as most investors tend to go with the departing CEO. Since then, Michael Ilczynski (former Seek CEO) has been appointed as the CEO of Redbubble. This appointment has gone down very well as far as markets are concerned and Michael is due to start his tenure on the 27th of January 2021. He comes with proven ability from Seek (another business that requires leveraging of network effects) where he led them to become a major player in both – APAC and Americas.

Covid-19 has accelerated the changing consumer behaviour. Ecommerce is among the top 5 growth industries over the next 5 years. For any consumer reliant industry, consumer heavy markets are required to deliver high transaction numbers.

Redbubble operates predominantly in the USA – a country with the largest consumer spending in the world. Europe is also becoming a major market for Redbubble after seeing healthy growth rates over the past 2 years. Both these regions have taken very kindly to online shopping even prior to the pandemic. Covid19 accelerated the adoption of online shopping and now, ecommerce is thriving. 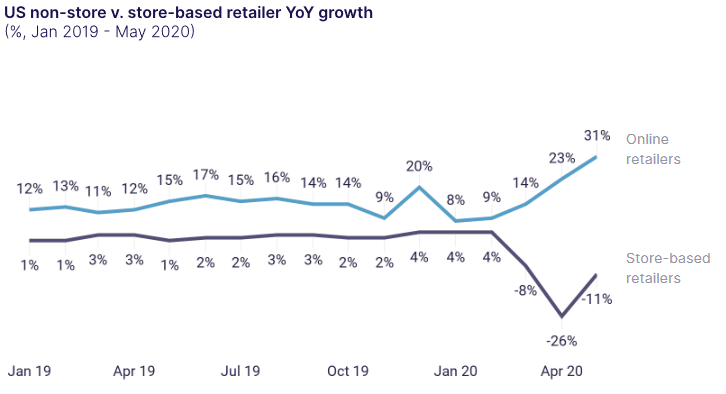 The USA is projected to have over 300 million online shoppers by the end of 2023. This represents more than 90% of their population adopting ecommerce and digital platforms. As at the end of 2020, roughly 70% of Americans are reported to have shopped online and 30% of them shop online every month. The average revenue per shopper in the USA is the highest compared to anywhere else in the world – at $1800 per year. The UK comes in second at $1600 a year, and the majority of the European countries all have average revenues coming in at over $1000 a year. The size of the total addressable market that is coming from the USA and Europe is in the billions for Redbubble.

Australia has been seeing massive growth in the ecommerce industry. Current estimates suggest the industry brings in overall revenues of around $34 billion and it has been growing at over 13% annually. While this high growth rate is not sustainable in the long run given the population of Australia, it is still safe to put the industry growth to be around 10% CAGR for the next 5 years.

Australia has seen a 55.6% year-on-year increase in online shopping as of November 2020, with most of the growth coming from Victoria, South Australia, and New South Wales.

We will also witness an overall expansion of the ecommerce industry with the integration of newer technologies. For instance, the emergence of BNPL (Buy Now Pay Later) has added long-term tailwinds to the growth in ecommerce. Perhaps one of the biggest advantages that Redbubble has is their launch and concentration on driving sales through a mobile app. Ecommerce adoption in digital app-based platforms are very high in the USA and other consumer heavy markets that have a younger population. Redbubble has also reported a 13% increase in marketplace revenue and a 159% growth in sales through their mobile app.

Very strong industry tailwinds are supporting Redbubble in all of the markets it currently has a presence in. Going forward, Redbubble may look to aggressively enter the consumer dense Asian markets such as India, South Korea, China, etc. – further increasing its total addressable market.

Redbubble has 117 product categories on offer as of June 30th, 2020, and there are much more in the pipeline. The firm sold 741,000 masks on its platform from late April to June – amounting to $12.1 million in revenues. While this has been a very successful product, the diversification of Redbubble’s revenues is very strong. Among the broad categories of products on offer, Redbubble has seen very high growth rates across all segments.

Redbubble’s retention rates for their artists and customers are very high. FY2020 saw a 74% growth in new customers for the firm, all the while keeping their marketing spend low at 11.4% off their marketplace revenues.

Marketplace revenues = Total Revenues – Artist Revenues. The firm’s marketplace revenues have been growing at a CAGR of 32% over the past 5 years, and their Gross Profit has been increasing during this time as well – at a rate higher than that of the revenues – 36% CAGR. This indicates that the operational efficiencies of Redbubble are very strong and as the brand grows, the benefits of economies of scale are starting to appear. 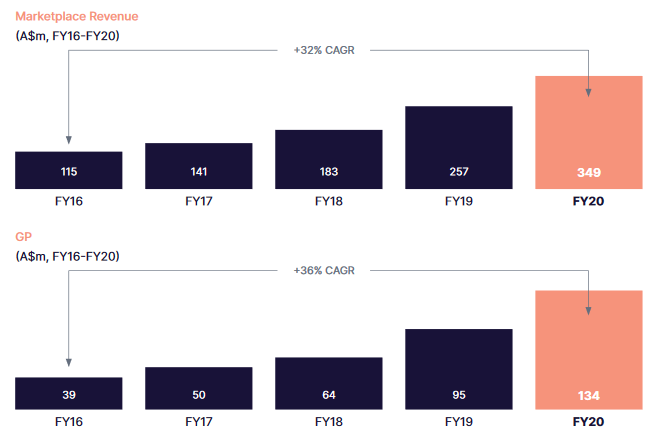 Q1 FY2021 was a tremendous quarter for the firm with 116% growth in marketplace revenues. We expect the growth rate to be higher during the December quarter due to the festive season attracting a lot more demand for its products. Our estimates suggest that FY2021 full year marketplace revenues for Redbubble will be in the $550 million – $600 million range.

Redbubble is already operating with very good margins that have been growing every year. However, it is still not profitable. With the high growth in revenues, we are expecting in FY2021, this looks to be the year when Redbubble will become profitable.

Along with sustainable and diversified revenue that Redbubble generates, it has managed to operate with a very capital light business model. Their capital expenditure during FY2020 was just $0.5 million. The total debt on their balance sheet at the end of FY2020 was just shy of $10 million. This puts the company in a position of very good financial health. They have $58 million in cash reserves and it takes their net cash levels after all debt and leases to $48.4 million. The capital structure shows 87.4% equity capitalisation and 12.6% debt. 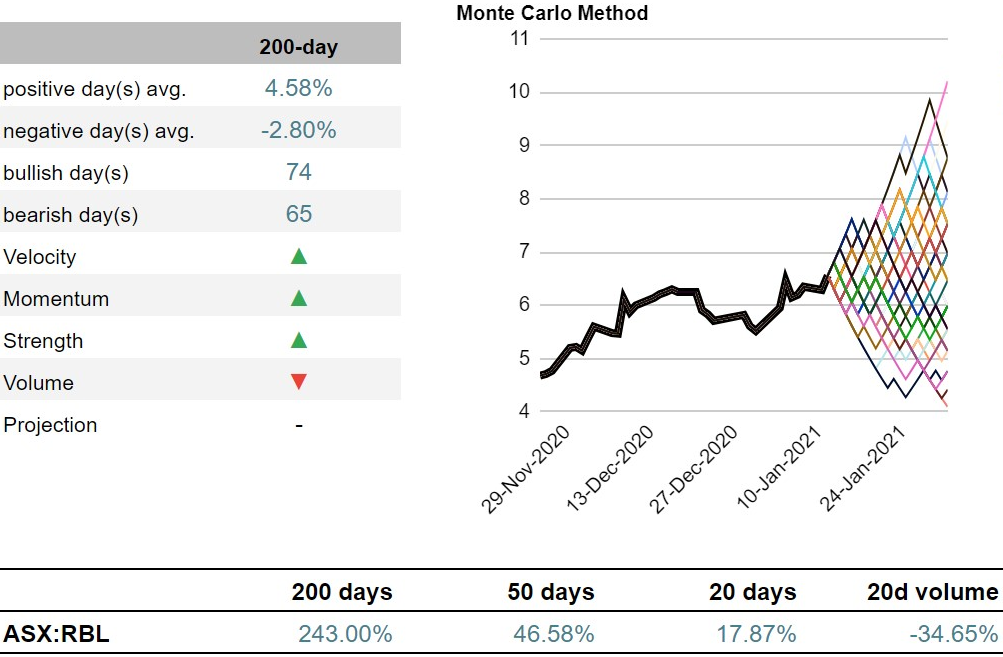 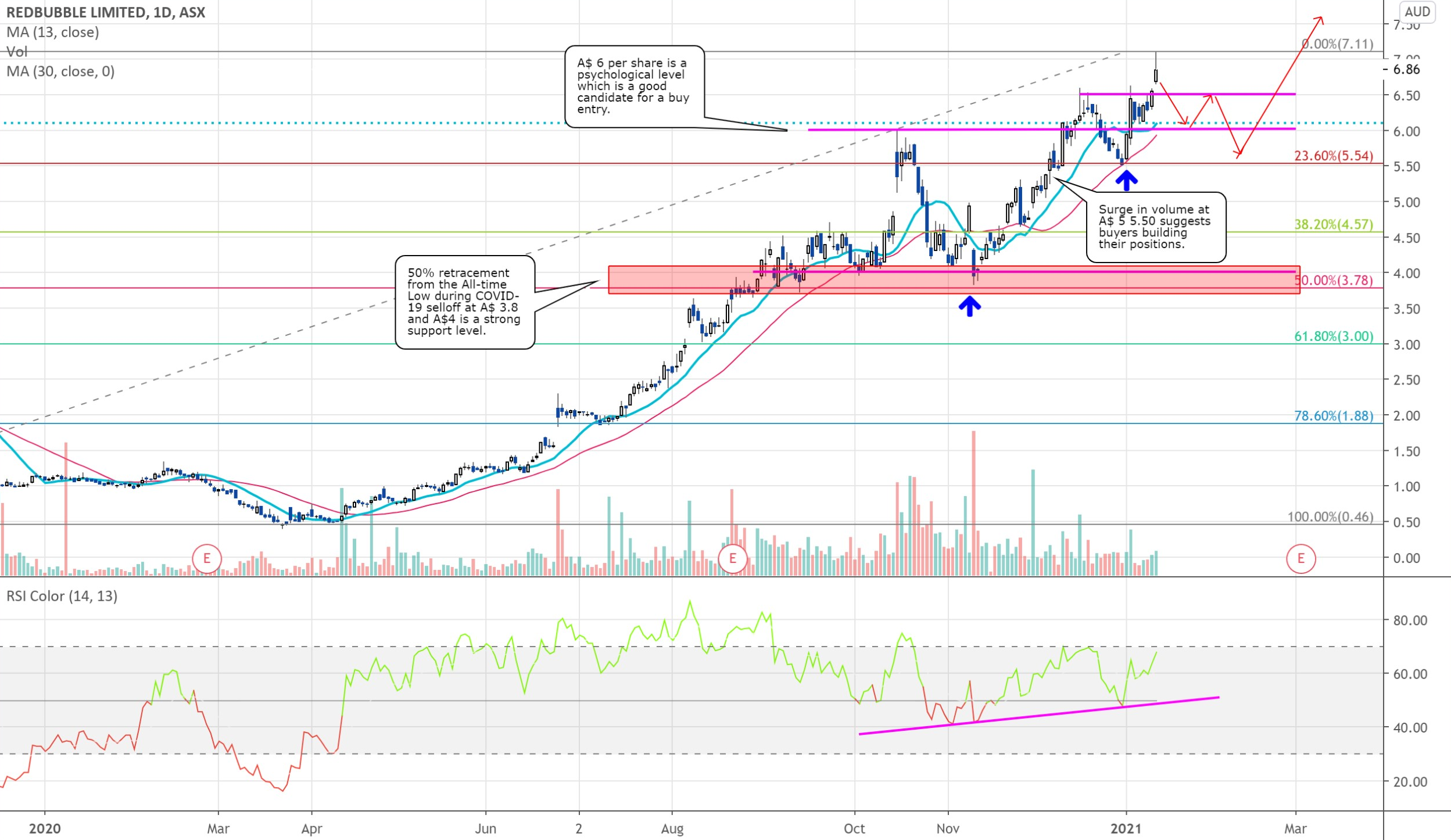 RBL is on a good uptrend supported by buyers entering at the key level at A$ 4 per share. A$ 4 coincides with the current Fibonacci extension from April 2020 all-time-low. We believe that the A$ 4 level provides strong support and a base for further upside. Volume is building up around the psychological level of A$ 6 per share which we believe can be a good candidate to implement a long-term long position. Recently, the A$ 6.5 level has been tested several times and acted as a resistance during December 2020 and turned support on January 12, 2021, after an impressive +8.6% breakout to the upside.

Usually, after a breakout, the price will tend to retrace back to its gap before a continuation of the upside momentum. The key area to observe is the A$ 6.5 level. Another level that also needs to be monitored is the A$ 7 per share. We believe that price may consolidate around this area before eventually rally further to A$ 8 or even A$ 10 per share.

Volume dropped since the last 200-day with the 20-day volume average falling by 34.65%. The price action proves to be bullish in the near-term, evolving in a range between A$ 6.5 and A$ 7.1 per share. With the volume declining, prices may fade back to the nearest support at A$ 6.5. 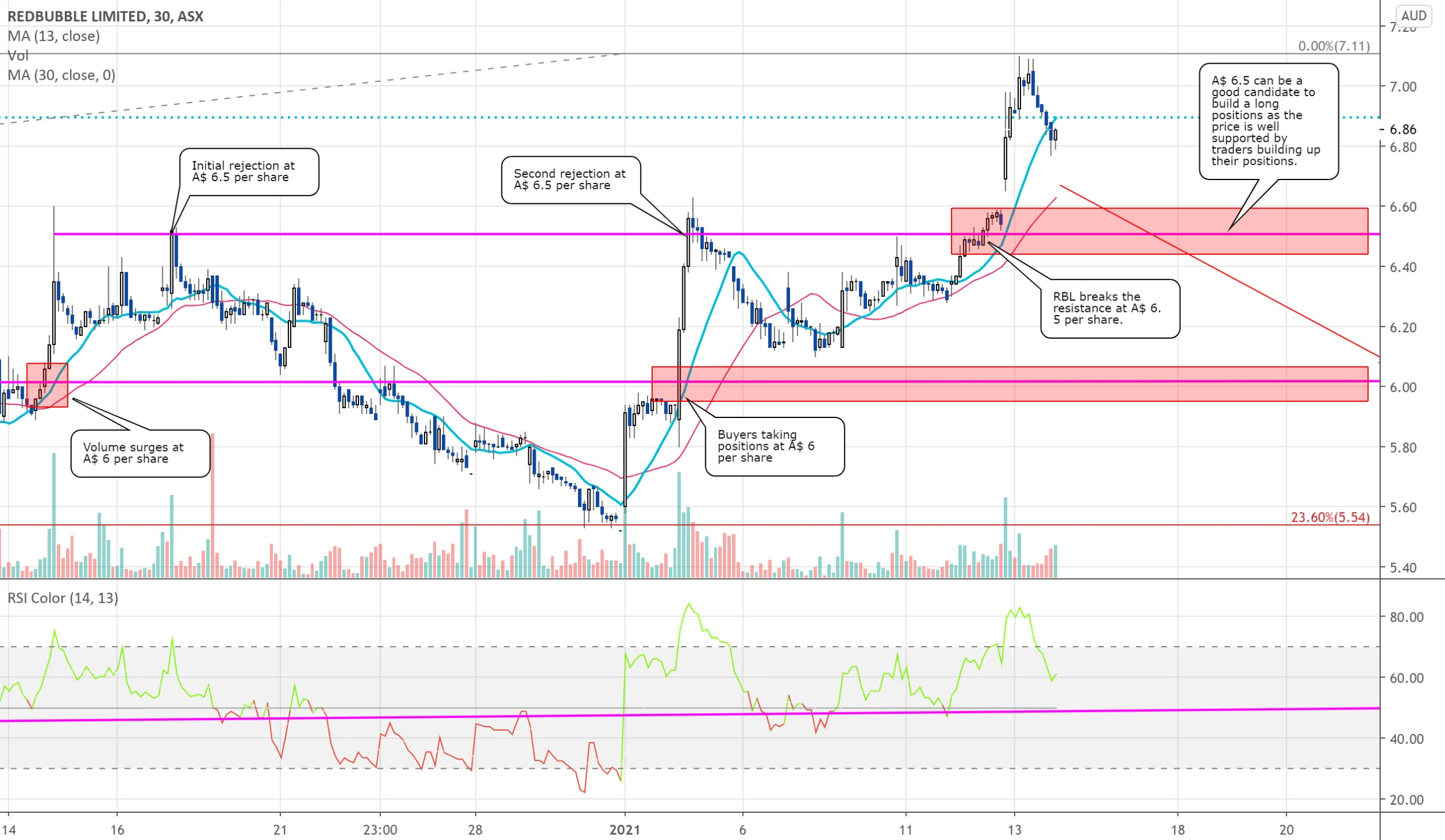 Redbubble has a very highly efficient flywheel-based business model that is bringing in revenues growth across all their product offerings. Their margins are getting stronger every year and FY2021 looks to be the year when the firm turns profitable. Redbubble remains focussed on building their artist base, acquiring new users organically, expanding their product offerings and fulfilment network, and ultimately building brand value. We issue a “Buy” recommendation for long-term investors.