Ramsay is still weathering the storm caused by the pandemic. The growth investments for FY2021 are in place but the guidance is still uncertain. We recommend members to “Hold”.

Ramsay Healthcare (ASX: RHC) is the biggest player in the private healthcare industry in Australia. In addition to ANZ, they also operate across Europe and Asia – in over 11 countries. In Australia and Europe, Ramsay operates by itself under its own brand. In Asia, Ramsay is in a joint venture agreement with Sime Darby Berhad – a Malaysian firm. They jointly own and operate private hospitals and health science college in Indonesia, Malaysia, and Hong Kong. 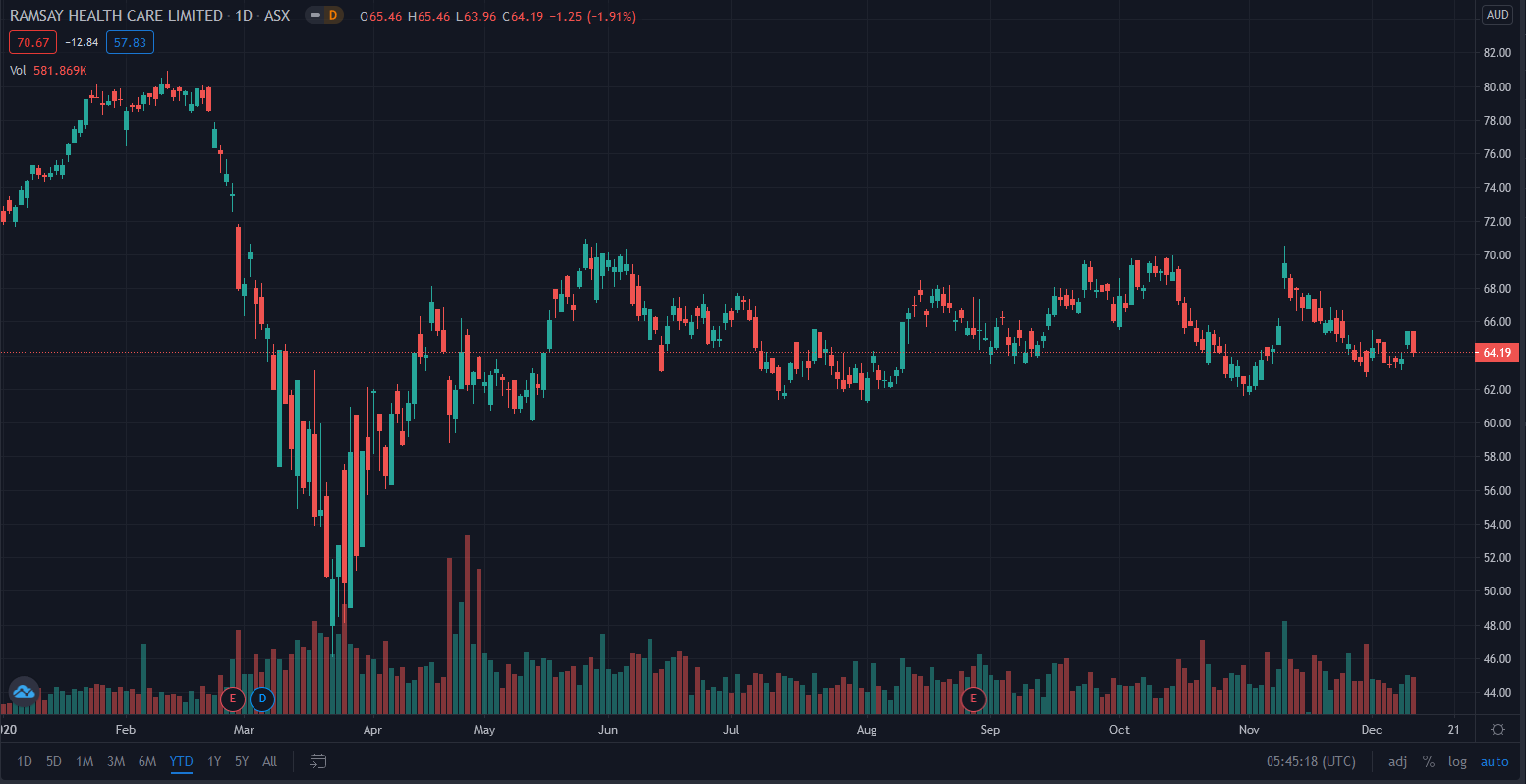 The Covid19 pandemic has brought a lot of volatility to an otherwise relatively stable stock price. The 5-year historical beta of RHC is 0.51. This indicates that for every point movement made by the index, RHC moves by 0.5. Since our initial coverage of Ramsay, it has dipped, gone back up higher levels, and dipped again. Ever since the crash in March, the stock has struggled to breakthrough the $69 per share barrier.

58.3% of Ramsay’s revenues come from Europe – mainly from France, UK, and the Nordic countries. The re-emergence of the virus in these countries means that the normal operations of Ramsay have had to be put under halt once again. Ramsay being a private hospital, has high margins for its services – such as surgery. Another temporary pause has hence impacted the firm for a longer duration. In the UK where Ramsay has been working with the NHS to provide cover for the country’s healthcare system by allowing them to use its facilities to treat Covid19 patients has been extended until 31st of December 2020.

Ramsay operates 72 private hospitals in Australia. During Q1 of FY2021, the state of Victoria was the only location to recover from the pandemic. Melbourne and Victoria were under strict lockdown for the most part – resulting in sector wide impacts. However, in the rest of the country, surgeries were up 1.7% compared to Q1 of FY2020, that is, prior to the pandemic. Other major services that Ramsay’s hospitals and clinics offer are – metal health, obstetrics, and rehabilitation. These services have not yet bounced back to levels comparable to the previous corresponding period. Ramsay did report that these services have seen a surge in demand in recent weeks as the economy is opening up and the pandemic is becoming a shadow in Australia. Excluding Victoria, the revenues generated are 6.6% higher than the pcp, and including Victoria, Australian revenues have bounced back as well by 1.5%.

Operating under strict guidelines during the pandemic increases costs for healthcare firms. The use of protective equipment, setting up of visitor screening facilities, the added cleaning requires additional staff (variable cost) and fixed costs. Ramsay reports that its costs have increased by $8 million per month in Australia. Therefore, EBITDA for the first quarter of FY2021 declined compared to FY2020. Half of the decline is estimated to have come from decreased surgical activity in Victoria – which is the highest revenue generating state for Ramsay. The added cost resulted in a double whammy for Ramsay’s earnings.

However, the light at the end of the tunnel is clearly visible now. Ramsay has started operating at 85% capacity in November and 100% operational capacity is expected to be reached in 2020.

Ramsay in France is home to 132 acute care and mental health facilities. In the Nordic countries, Ramsay operates 210 facilities in total. Ramsay saw a 5.4% increase in surgical activity during the quarter compared to the first quarter of FY2020. Most of this demand can be attributed to the firm catching up on backlogs. With the second wave of the pandemic coming by, demand is estimated to be affected further. Ramsay has been operating under the funding guarantee scheme that has been laid out by the French government. The additional costs that have been incurred by Ramsay will be compensated under this scheme.

Ramsay has cut down its assets in Europe. The 9 hospitals that it owned in Germany have been sold and Ramsay has exited the German market. In France, Ramsay has sold 2 hospitals.

The firm has not provided further details on the region due to the ongoing Covid19 situation. The government has been using Ramsay’s facilities.

Ramsay operates 34 hospitals and day procedure centres in the UK. In addition to the usual services Ramsay provides, they also have diagnostic imaging and neurological services in the UK. The total revenue during Q1 of FY2021 has decreased by 9.9% compared to the previous corresponding period. This is due to the re-emergence of Covid19 cases in the UK – adding pressure to the health system and again posing a roadblock to general surgeries and non-critical treatment. The private health insurers have recently started pushing for surgeries to reduce backlog of surgeries and treatment that have increased due to the pause in services.

Our estimates tell us that Q2 will see a bounce back in demand and revenues in both – the UK and France. However, the sustainability of this demand will be in question as the majority of the numbers will be driven by the sudden surge to accommodate for the backlogs. The region has been exposed to the crisis much more than Australia, and it is showing.

3 hospitals in Indonesia, 3 hospitals in Malaysia, and a day surgery hospital in Hong Kong – these are Ramsay Sine Darby Healthcare’s assets in Asia. The first quarter of FY2021 has seen an increase in demand in Malaysia. However, much like Europe, the second wave has posed quite a big roadblock for smooth operations.

Ramsay reported that Indonesia did not impose any restrictions on the surgeries. However, the control on the movement of people impacted the volumes in patients coming in. The Asian region is very small compared to the other geographical locations Ramsay generates its revenues from. Further details on revenues and costs have not been provided by the company for the Q1 activities of FY2021.

The lack of an update or guidance provided by Ramsay looks like has been the biggest barrier for the stock price to remain at the levels it is trading at. Once the news of a vaccine broke, RHC gained and was trading high. Investor positivity, however, quickly came down as Ramsay did not provide a guidance update for FY2021.

Australia looks set to be the best performer in all of the regions that Ramsay operates in. The situation in Europe is still tense and even with the earliest arrival of a vaccine, the return to normal looks to be 6-7 months away (from a bullish standpoint).

Capital expenditure for FY2021 is supporting the Australian narrative. $250 million to $300 million is the expected capex in Australia as Ramsay will continue the development of the brownfields project. One of the trends and shifts in consumer behaviour we have noticed is the decline of the private health insurance industry. The younger generation are refraining from purchasing and maintaining private health insurance. This limits the long-term growth rates in the industry. However, in the short and medium term, the aging population of Australia provides enough tailwinds for Ramsay’s revenues to return to average growth levels it has maintained in the past few years – which is around 5% per annum.

The European operations are be restructured to better optimize Ramsay’s portfolio of assets. Assets in Germany were sold off and Ramsay will benefit from increasing its presence in regions it already operates in. Capital expenditure for FY2021 is estimated to be around $200 million for Europe. The firm is also expected to benefit from the integration of Capio by way of acquisition. Synergies are estimated to increase revenues by $20 million a year once normal activity resumes. The capex in the UK is the least – with about $50 million expected in FY2021. It is clear that Europe excluding the UK and Australia are the major markets where Ramsay is looking to invest to drive its growth. The regional dominance enables Ramsay to decrease its costs due to the benefits of economies of scale that will be reached in its operations.

The industry average for asset turnover ratio for private healthcare firms in Australia is 0.32. The metric measures how capable a firm’s assets are in generating revenues. Ramsay’s asset turnover ratio stood at 0.62 during a year with a lot of headwinds. This is still 200% more than the industry as a whole. The 6-year average pushes the ratio to 0.94. This indicates Ramsay’s strength as a business and its efficiencies in generating revenues from its investments.

The financials reported by the firm remain the same from our previous analysis of Ramsay Healthcare. Members can view our previous report for a detailed analysis of both – the income statement and balance sheet of the firm by clicking here.

With much of Europe experiencing a second wave of the virus, the short-term impacts still persist for Ramsay. The firm, however, is continuing to invest and they have a commendable track record in generating revenues from those investments. The depth of the short-term impacts for FY2021 is still unknown as Ramsay has not provided an update. Hence, we recommend members to “Hold” their positions.