A financially stable with that has benefited from the surge in nickel prices. The stock is currently trading close to its 52-week high, and we recommend investors to “Hold” their positions.

Nickel Mines Limited (NIC) is a nickel pig iron (NPI) producer, the element used in stainless steel production. NIC is one of the low-cost NPI producers. The firm derives all of its revenues from operations in Indonesia through its two nickel mining projects – Hengjaya Nickel and Ranger Nickel project. The production process followed by NIC in both its projects is a 2-line Rotary Kiln Electric Furnace (RKEF).

NIC as of today own 80% interest in both the projects it operates. The firm’s operations were disrupted in the quarter ending June 30th, 2020, resulting in decrease in production levels and hence, decrease in revenues compared to the previous quarter highs that NIC had posted. However, the 80% ownership that was announced effective 1st July 2020, should boost performance in the quarters to come.

NIC has partnered with Tsingshan since 2017, the Shanghai based firm that is the world’s largest producer of stainless steel. The partnership and NIC’s strategy of owning more and more of its operational projects increases their future growth prospects. 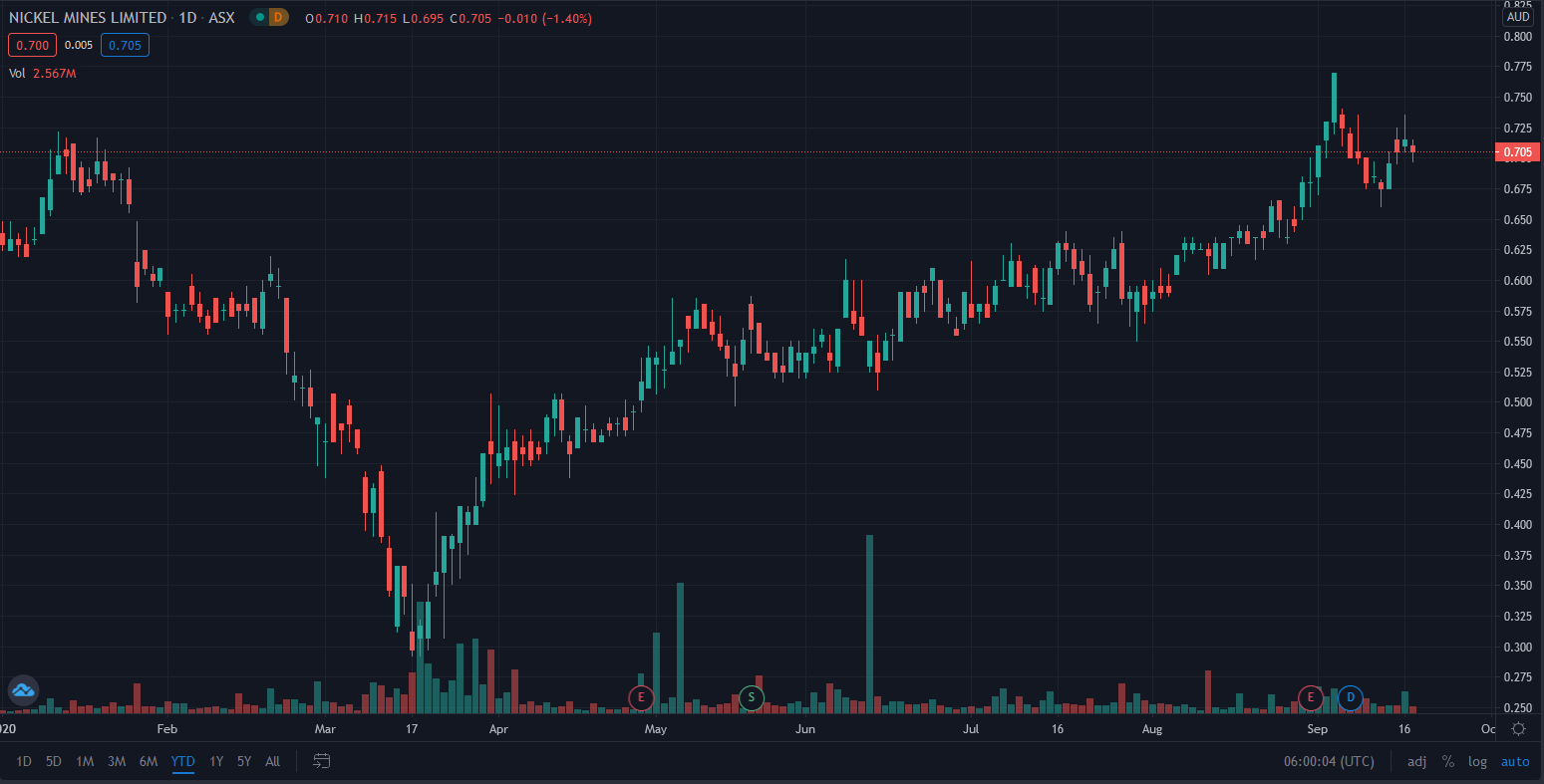 The share price of NIC has recovered all its losses induced by the crash in March this year. While there has been some degree of volatility, which is the case with firm that are heavily reliant on commodity prices, the stock price trajectories are striking similar to the Dow Jones Commodity Index Nickel during the same period.

The stock price went on to set the 52-week high in early September and is currently trading about 8% lower than the high. Trading volume surges drove prices in May and June as investors wanted to get in on the action with Nickle demand rebounding as China recovered from the pandemic.

The initial rebound in late March and early April was due to the strong quarter performance results that were posted by NIC, which can be seen with increase in trading volumes as investors rushed to buy the stock at low prices. 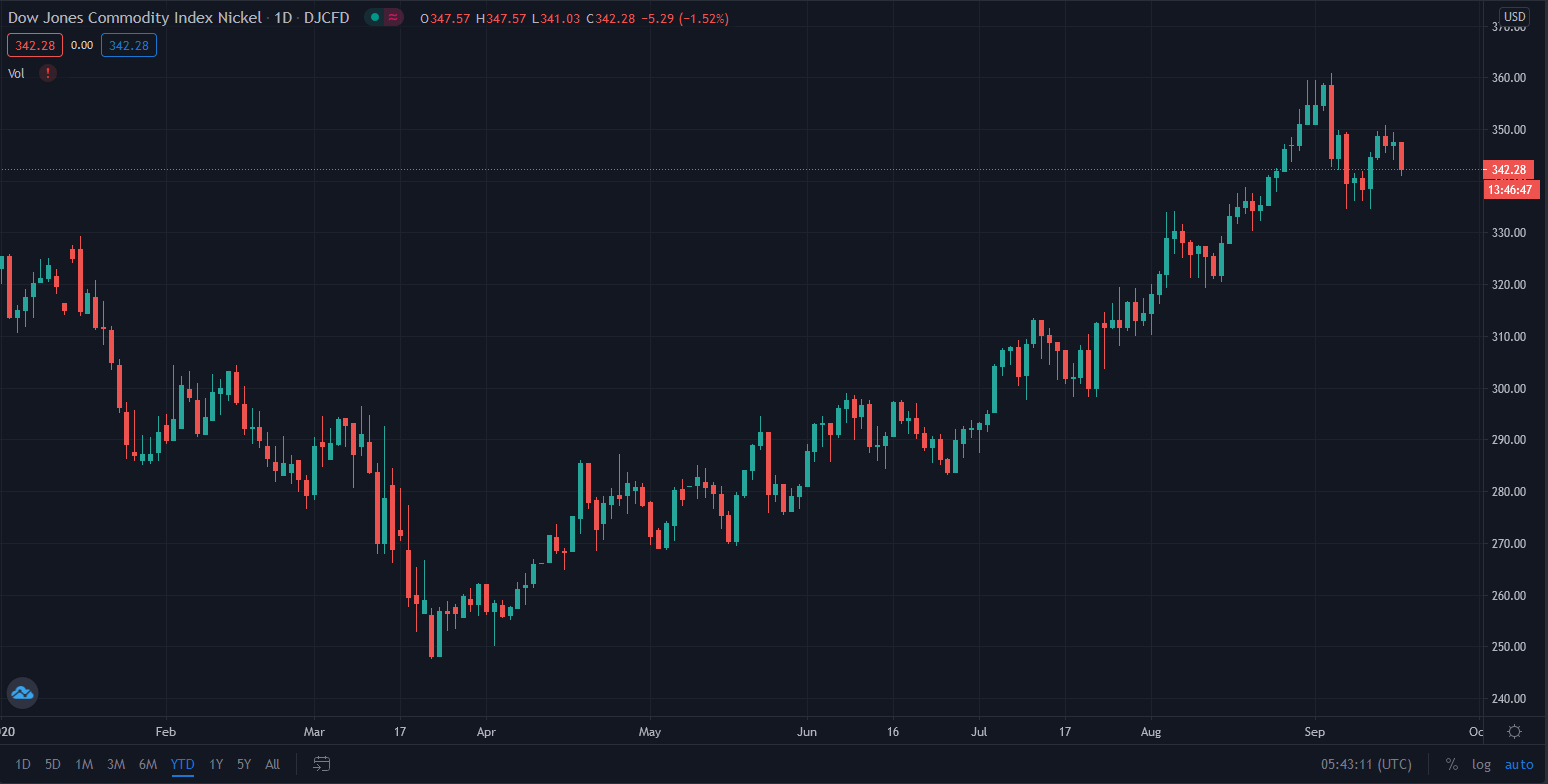 Nickel prices have surged recently since the lows of March. Initially, the decrease in supply as nickel miners halted operations due to covid19 restriction caused a surge. Following China’s early recovery, the demand for stainless steel has increased and has been carrying the commodity price to new 52-week highs.

Supply and demand are what moves commodity prices and is where the volatility in prices comes from. The demand for stainless steel is expected to increase the following year as China and the rest of the emerging countries recover from the pandemic. This in turn will cause industry revenues to increase, benefitting low-cost nickel producers.

The nickel industry has seen a lot of growth coming from China. China currently accounts for more the 50% of the global demand for stainless steel.

The production of nickel in Indonesia enables firms to produce low cost nickel due to the lower costs of production associated with the geographical location. The Indonesian government promotes the Nickle industry as well and is currently the largest producer of nickel in the world.

The demand for stainless steel and therefore nickel is mainly driven by China and the emerging markets of Asia and South America. Tesla also pays a significant role in the demand for Nickel as it has recently ramped up its production capacity.

Industry profit margins have increased in the past 5 years and is expected to increase if the nickel price keeps up the ascending tend.

The second quarter (Q2) of 2020 ended 30th June did see dip in performances in NIC’s financials. The operations were affected by adverse weather in June. The production of nickel from its RKEF facilities were 10.5% lower than the records set in the March quarter (Q1) with 11,291.3 tonnes of nickel metal. Since NIC owned 60% of the projects during the end of the quarter, the nickel attributable production to NIC was 6,062.3 tonnes.

Q2 revenues from RKEF was down 37.2% from Q1, ending the quarter at US$ 87.5m. Hence, EBITDA declined 51.8% to just shy of US$50m. The costs during the recent quarter increased marginally by about 2% – impacting the earnings.

The increase in shipping costs due to the supply chain disruptions caused by the pandemic have influenced the balance sheet of NIC positively, offsetting its declined earnings. The chart below shows the effects the production endured during the June quarter relative to March.

We see these results as a minor dip in performance due to unavoidable circumstances – adverse weather and covid19.

The cash position at the end of June 2020 has been increased to US$91.2m. The assets and liabilities are a sign of good health. NIC has also voluntarily made debt repayments in the half year 2020 – strengthening its balance sheet. The short-term and long-term assets are seen to have decreased compared to December 2019.

Currently, its assets exceed liabilities by 5.89x. NIC is also in a position in to meet any short-term debt obligations with its current cash position – all pointing to immense strength in its balance sheet and financial health. The capital structure of NIC is very light on debt – with just 6.9% debt capitalisation in its US$800m total capital, the rest being equity funded.

NIC for the first time, declared a dividend of A$0.01 per share. The firm also revealed that future dividends will depend on strong operations of RKEF projects, global macro-economic conditions, and the potential for growth opportunities. NIC’s current strategy is focused on growth. This means that the firm’s dividend payout may not increase.

NIC has increased its ownership of both the projects to 80%, which should result in greater earnings. The rising nickel prices complement the forecast and will sure to increase EBITDA margins for the firm. The strategy to focus on growth at this time looks to have already been benefitted the firm with the recent surges in share price. The price is currently 8% off its 52-week high. We hence recommend investors already exposed to the stock to “Hold” their positions.