Nextdc and the cloud services sector has a lot of tailwinds going forward to support the growth strategy that the firm have taken up. A "Buy" from us.

Nextdc Limited (ASX: NXT) has had a stellar year and the stock market has backed their story. NXT has returned 73.1% year-to-date. Our last coverage of the stock was on the 22nd of September at a price of $12.05 per share. Since then, the stock has gone on to post an all time of high of $14.10 in early November and has been on the decline since. In our report, we discussed in length about how Nextdc has benefitted during the Covid19 crisis, and also how it will emerge out into a post-pandemic world stronger than it was going into the crisis.

The emergence of a vaccine earlier than expected, and the economic policies announced by the government aimed to increase economic activity has brought positive news to some of the brick and mortar industries. We believe this has been a catalyst to change investors moods around business that have benefitted during the pandemic – resulting in a sell-off. The trading volumes have increased as well during this period, which can be seen from the below image. This sell off presents an opportunity to members who do not have Nextdc as part of their portfolios. 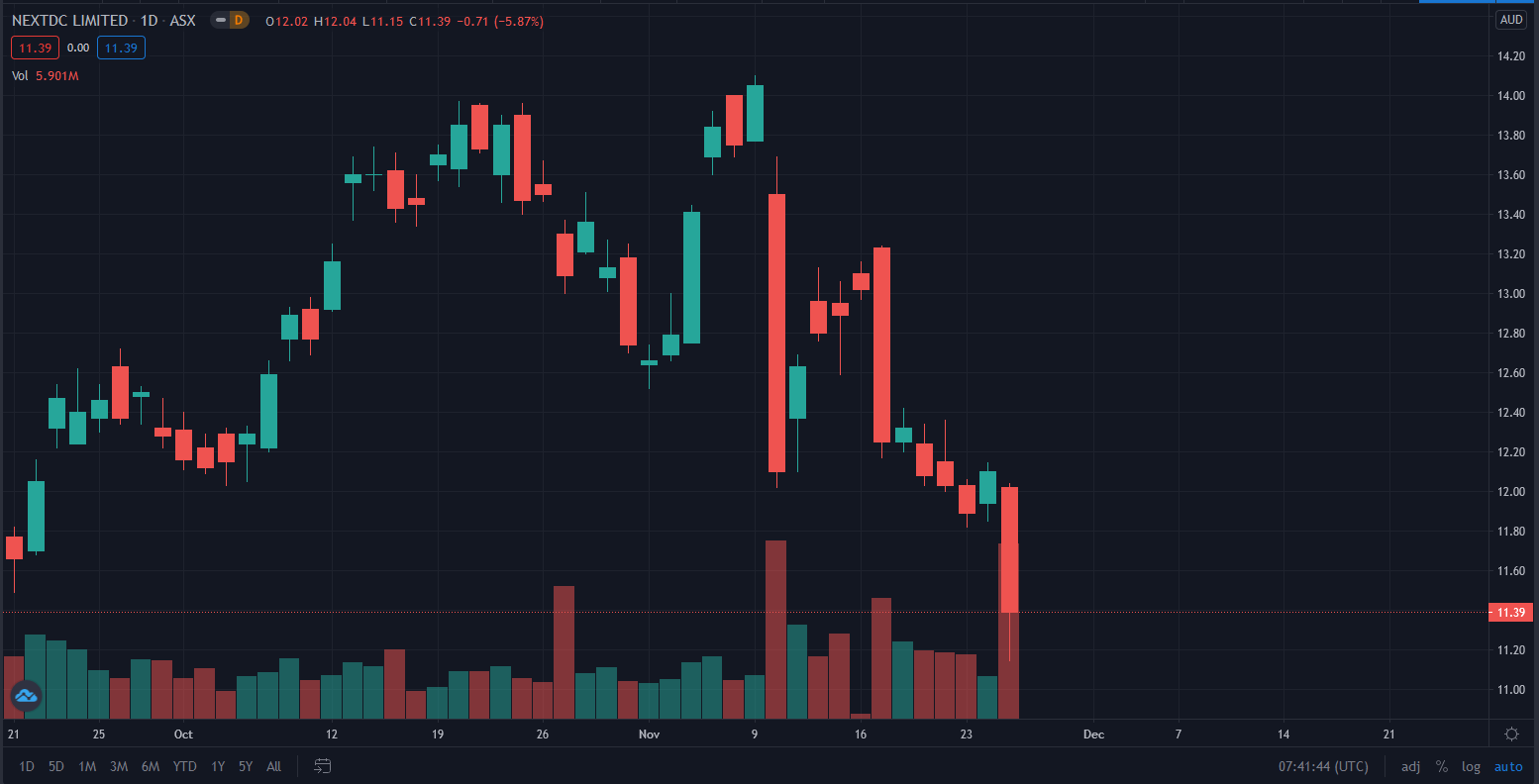 In the migration towards a digital economy, which is inevitable, cloud services in one among the top 5 investments that has to be made – along with cybersecurity, data analytics, etc.

Initially, the move to cloud services was mainly driven due to the cost benefits it provides. Although this is still a very good reason for adoption, there have been other benefits such as enhancements in customer service, ease of development & launching of new products and services, etc. The shift towards digitization has been made easier by the evolution of cloud services. Two of the biggest headwinds for adoption has been the lack of skills and the migration from legacy systems. It is thus easy to see why there is such high uptake towards cloud services.

The 60%-65% adoption of cloud services shows how nascent the Australia cloud services market really is.. Research put a value of over US$10 billion with growth rates of at least 17% for the cloud market of Australia by 2023. It is safe to say that this is a high growth sector that will be central to the shift towards a digital economy.

Nextdc reported total revenues of $205 million – a 14% increase from the previous year. Over the past 5 years, the revenue growth has been positive, which is expected for a growth firm. Revenue forecast for the next 3 years are high. We expect the growth to be around to 25% mark every year, and revenues to be close to $400 million by the end of FY2023. The EBITDA margins has been a growing trend during this time – indicating their as-a-service business model is strong with retentions of customers and network effects responsible for the increase in margins.

As the Nextdc’s assets grow and their utilisation increases, the EBITDA margins will only get larger. Our forecasts estimate margins of 60% by the end of FY2023. Higher margins mean that Nextdc will become profitable soon. In FY2020, the firm reported a net loss of $45 million. The reason for this is an accounting anomaly wherein the firm decided to recognise $26 million of tax expenses during a year where expectations would be lower than what would otherwise be.

To support this growth, all of Nextdc’s data centres are already either undergoing expansion or is expected to be expanded in the future. The picture below shows just how small a percentage of its data centres are being used (as of June 30th, 2020), and how much room there is for growth.

The expansion in facilities requires capital. The capital expenditure guidance for FY2021 is between $380 million and $400 million. Data Centres in Melbourne are due for delivery in FY2021, and phase one of its Sydney facility has a target open date in the second half of next year.

The senior debt facilities have been extended by the firm in light of the capital requirements for its growth ambitions. Over the course of the next 5 years, Nextdc will have access to $800 million of term loan facility, $400 million for capital expenditure, and $650 million of an upsized revolving credit facility.

There are several industries that have already adopted cloud services in Australia. Nextdc’s revenues are generated mainly from enterprise business (40%) such as Microsoft and Amazon. The cloud gaming industry is also expected to boom in Australia with the much-awaited introduction of Microsoft’s game pass services later this year. The demand will be driven by the enterprise and cloud businesses for Nextdc; however, we will also see a shift in retail customers shifting to e-commerce going forward. Our revenue forecast is robust for Nextdc over the next 5 years.

For a deep dive into performance metrics of Nextdc, members can click here to view our initial report. The latest financial statements reported by the firm remain the same, and so is the analysis from September.

Nextdc ticks a lot of boxes for a long-term growth investment. It has also historically outperformed the benchmark ASX-200 index. The tailwinds for the business are stronger than ever before. Nextdc has been expanding and it continues to do so – both in assets and customers to utilise those assets and generate revenues. Funding has been secured and the firm has enough capital to push those expansions. It is a capital-intensive business model, as is an infrastructure business; digital or otherwise. The margins are healthy and will continue to increase due to economies of scale. We recommend members to “Buy” during this tech sell-off and hold on it for the long-term as the stock trades below its intrinsic value.