MVF is a cyclical business and it will grow as the economy recovers. A buying opportunity for long-term investors at these prices.

Monash IVF Group Limited (ASX: MVF) has returned 29.3% to members who bought the stock when we first recommended it on the 11th of September at a price of $0.58 a share. It currently trades at $0.75 a share. The stock has been exposed to volatility during this time given the nature of its business. The assisted reproduction business is very cyclical. The procedures are expensive, and they do not have a 100% success rate. Having a baby is a beautiful, but a rather expensive affair. This means growth in assisted reproduction will be capped given the general state of the Australian economy and the job market – making the entire business segment cyclical. Monash did reveal a very high growth in stimulated cycles during June and July 2020, however the data does not reveal everything. Patients who were undergoing treatment prior to Covid19 restrictions had to pause their therapy and they had now returned to continue the process – this looks to have sugar-coated the numbers. The market looks like it did recognise this, and it resulted in most of the gains made in August being wiped out over the course of the next couple of months. 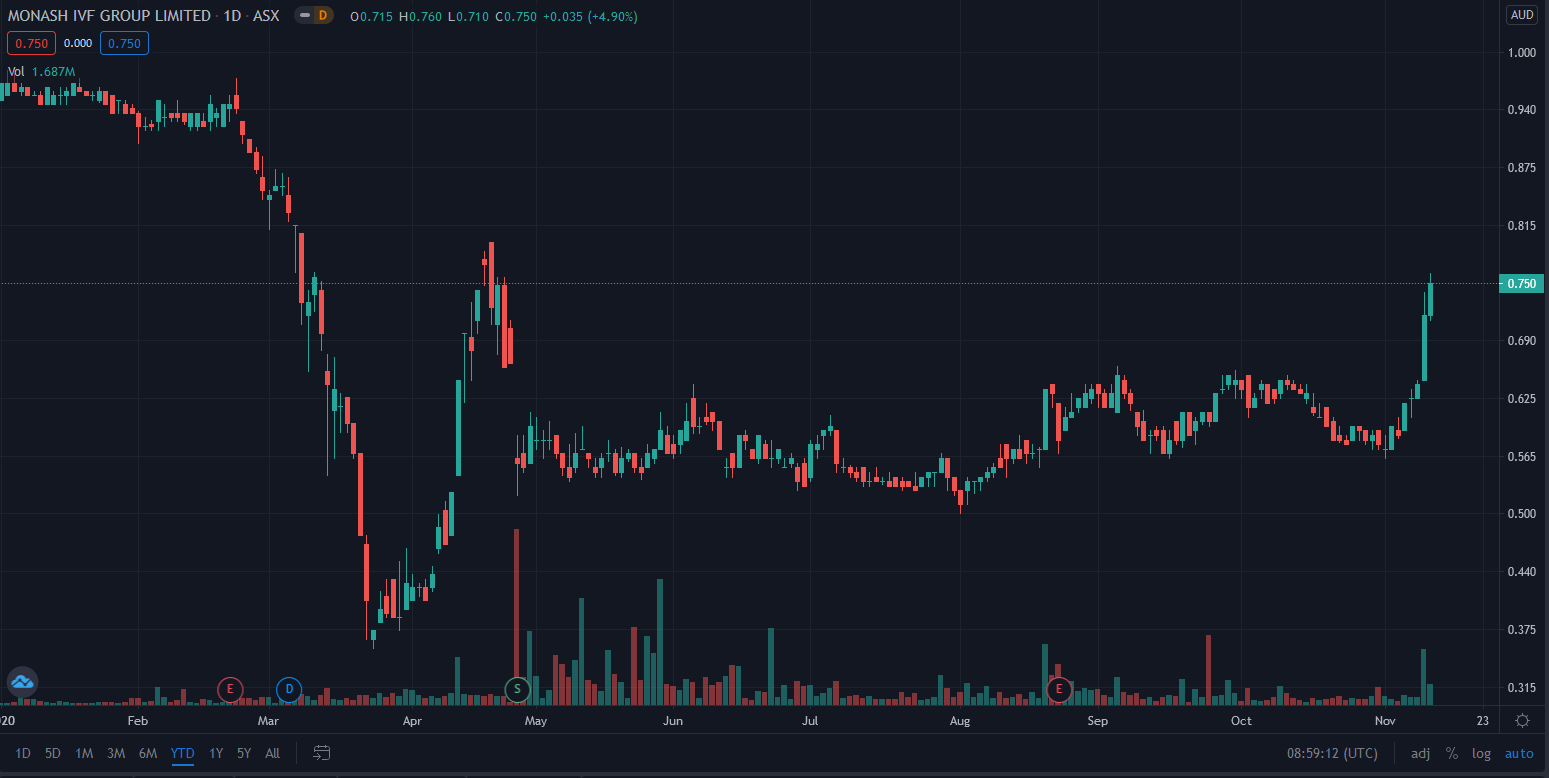 The biggest news however has been the emergence of a potential vaccine earlier this week and the stock has jumped up since. While it is still very early to suggest that Pfizer’s vaccine is the vaccine that the world needs, the markets seem to be pricing MVF positively on the back of not just the vaccine but also the government stimulus that is aimed at helping Australians hold on to more money by decreasing taxes. The JobKeeper program and its continued implementation is also very positive for the economy as a whole and certainly to Monash.

Prior to Covid19, the Australian economy was slowing down. The government has been trying hard for the last couple of years to boost the economy by reducing interest rates. As we stated earlier that the assisted reproductive business is cyclical and Monash seems to have seen the need to diversify their business, especially with margins in the assisted reproductive segment becoming increasingly thinner over the last few years. Monash is the second biggest player in the assisted reproduction industry in Australia. However there has been a bit of a price war as of late among the players in this space – resulting in thinner margins. This is where Monash’s diversification has helped. In addition to 21 fertility clinics that they operate, Monash has also been investing quite aggressively in ultrasound clinics. The firm now operates 18 ultrasound clinics, 2 diagnostic labs and 1 hospital. The diversification into diagnostics is clear here and it fortifies their business during a period of uncertainty.

The assisted reproductive industry is not a high growth industry. The growth rates have been amended in the near term given the destruction Covid19 has had on the economy and the financial wellbeing of Australians. However, in the long-term, the forecast is still strong and the industry in the ANZ region will push towards the billion-dollar mark by growing at about 2% annually until 2025.

In stimulated cycles, MVF’s market share has slightly declined by 0.2% and it now owns 20.4% at the end of FY2020. Monash reckons Q2 of FY2021 is when normalisation would occur. While this should be taken with a grain of salt, it is possible with a potential vaccine now on the cards. 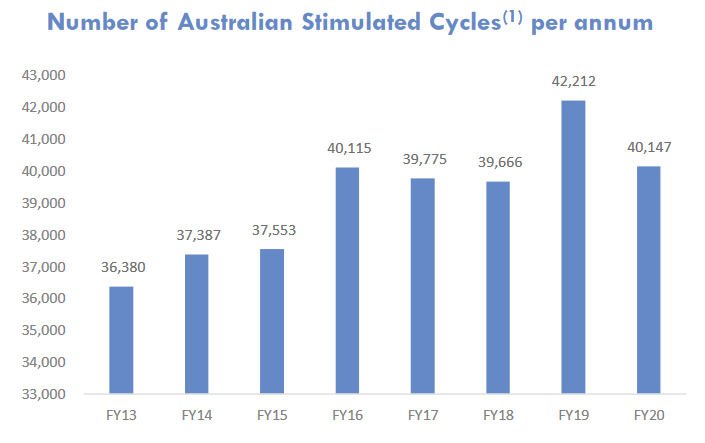 The diagnostic imaging industry is growing at a higher rate than the assisted reproduction industry. In Australia, IBIS reckons that it is already valued at over $4 billion and is forecasted to grow at 3.1% through to 2026. The diversification of Monash into diagnostics goes hand-in-hand with its main fertility business. The margins in this segment are low however, and high volumes of in sales are required to turn profitable. Industrywide, an 8% profit margin is usually maintained for diagnostics.

In FY2020, the total scans across all of Monash’s clinics was 82,311 – a 1.8% increase from the previous year. The growth here, however small, indicates that diagnostics is not as cyclical as the assisted reproduction segment. 94% increase in reproductive carrier screening counselling volumes was seen. This is expected to be a key strategic driver of future stimulated cycle growth to avoid genetic disease in children as awareness for the service grows. Revenues from ultrasound saw a $0.2 million increase during the financial year as ancillary services and genetic screening offset the declines that were seen during lockdowns.

Monash is making advancements in scientific research to improve the success rates of assisted reproduction. The Non-invasive pre-implantation genetic screening technology is increasing use of genetic screening providing patients with an opportunity to reduce time to pregnancy. The new microinjection technology that is in clinical trials can be made to commercialise in FY2021 if everything goes well.

The doctor partnerships seem to have been sorted out by Monash and all of their 24 fertility specialists in Victoria are contracted. The firm claims that 97% of its specialists are now contracted – reducing risks of doctors leaving the group. In addition to this, Monash looks to have also laid out a strategy to attract new talent for Sydney fertility clinics as their Sydney CBD clinic looks set to open during Q2 of FY2020.

Southeast Asian expansion also looks to be on the cards for MVF in the coming years. Malaysian operations have been affected due to the pandemic. Revenue decreased by 14.5% from $11.6m to $9.9m and EBIT decreased by 24.0% from $5.0m to $3.8m as a result of volume declines in the period from March to June 2020. The recovery in Malaysia and other parts of SouthEast Asia is expected to be slower than that of Australia. However, once it does, the Asian market is forecasted to grow at a higher rate than Australia. Monash acquired an IVF clinic in Malaysia during June 2020 – that should see patients from both Malaysia and Singapore.

The firm has not revealed a guidance forecast for FY2021. However, we do expect an update at its AGM later this month. We are expecting a growth rate in both its business segments during the financial year. Our forecast for the next 3 years can be seen from the below graph.

While the forecasts have changed, we have not been updated by Monash with new financials since our last report. We urge members to click here and view our initial report before making an investment decision as it analyses the financials of the firm thoroughly.

The federal government has shown that it will do what it takes to relieve some of the pressure by adding stimulus into the economy. The cyclical nature of the business presents an opportunity for long-term investors to still “Buy” the stock as it is trading below its fair value. The diversification into diagnostic imaging de-risks the investment into Monash.