Mesoblast Limited (ASX: MSB) is always in the news for either good or bad reasons. Recently there has been a couple of bad announcements that have resulted in 2 plunges in the stock price. Mesoblast Limited plummeted 37.2% early October as it faced a temporary setback with its FDA approval still pending. The trading halt requested on the 1st of October did not do the firm any favours as they only tend to increase nervousness among investors and traders. The FDA has requested Mesoblast to conduct another clinical study for its Remestemcel-L product to support its efficacy before it can go ahead with the application process. Remestemcel-L is used to treat aGVHD in children. The FDA looks to be doubling down on safety by asking Mesoblast to perform a randomised, controlled trial.

The second plunge during December was as a result of an announcement that showed some hiccups in the clinical trials that were being conducted for their drug that was bid to treat Covid19. The stock plunged 33%. With other treatments now approved for the treatment of Covid19 and vaccines rolling out around the world, it looks like Mesoblast has lost ground when it comes its product candidate that could treat Covid19. 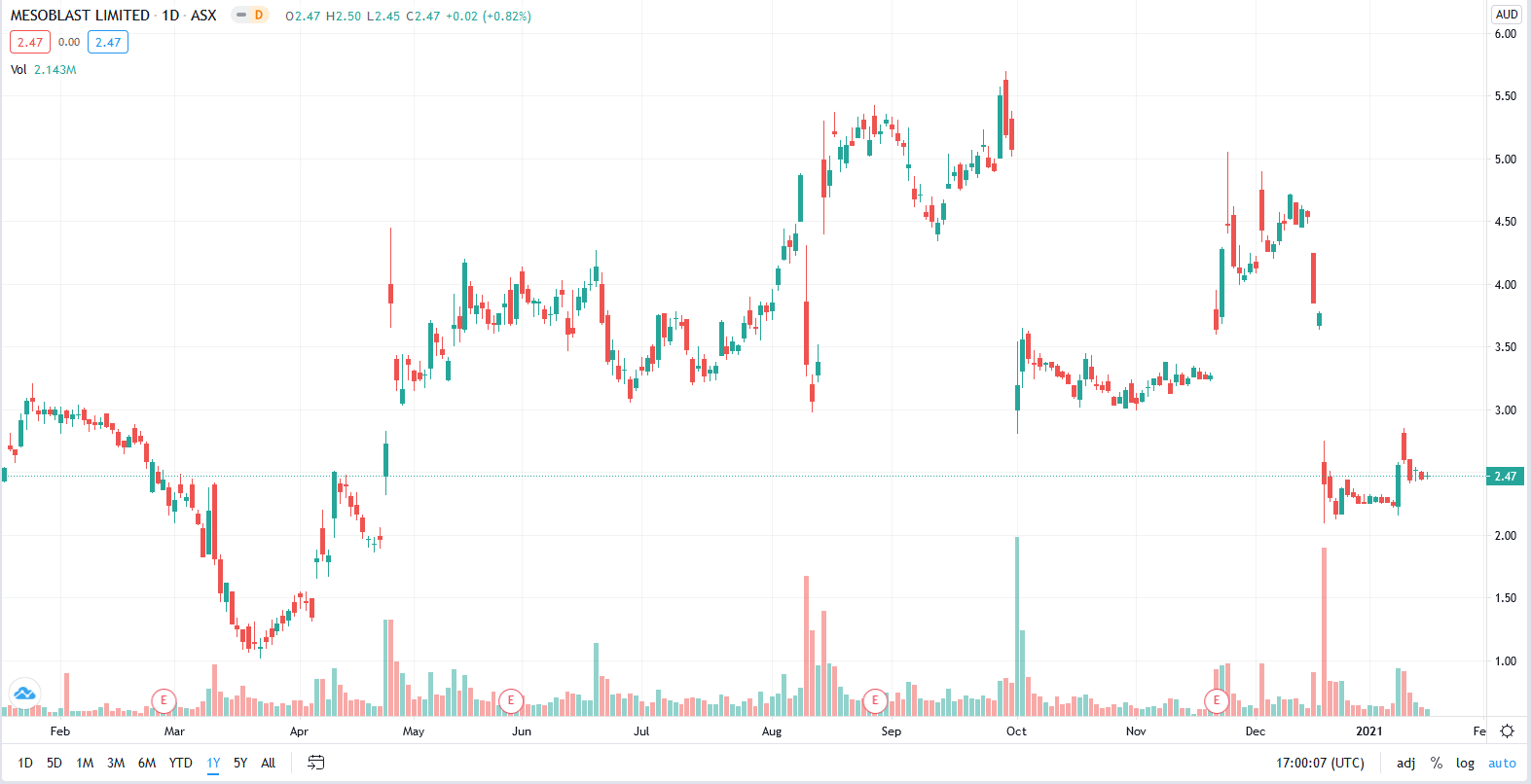 Among all the risks that Mesoblast potentially faces, regulatory risk and clinical risk are the biggest at this stage – especially considering that its product Remestemcel-L is being pushed ahead of all the products in its pipeline.

The diversified applications of its various products do reduce risk. Partnership agreements for commercialisation may be one of the best solutions most of their product candidates as Mesoblast may find it hard to market a new drug initially. While these partnership agreements do bring in revenue, the upper limit is capped as revenues are usually received as a royalty payment by the commercialisation partners.

Remestemcel-L, hence, is one of the more important product candidates Mesoblast is working on. Ryoncil – the product candidate that received a pushback from the FDA resulting in a plunge earlier this month. While there were no concerns regarding safety, the FDA has asked for a randomised controlled study in children. Mesoblast reckons that the study is not feasible as they do not want to expose children to a drug that not been approved yet. The request being made from the Type A meeting is for an accelerated approval based on the existing data they already have – enabling Mesoblast to then go ahead and conduct a post-approval study in adults and then update the panel. The length of the study is not something the firm has provided an update on.

The risk here is that the FDA may not budge as there may be extra precautions taken given that the treatment is for children suffering from aGvHD. Another feature of this merry-go-round with the FDA is that Mesoblast is essentially asking the FDA to approve the drug so that it can use it conduct a study.

Rexlemestrocel-L, the other product candidate also has a few applications. The treatment of heart failure has been gaining traction off late as. An announcement in December showed that a single injection of the drug on top of maximal therapy resulted in 60% reduction in the incidence of non-fatal ischemic major adverse cardiac events due to heart attacks or stroke. The Phase 3 randomised controlled trial thus had a positive outcome. While there are a lot more numbers in the announcement, its worth knowing that there is still a long way to go if Mesoblast will commercialese from this product. Pending further discussion with the FDA, we will know what the next course of action is for Mesoblast as they look for a potential pathway for approval. A positive response here would do the company a much-needed world of good.

Mesoblast is not profitable and will not be until its products receive approvals from the regulators and mass production begins. The revenue they derive is through the commercialisation agreements the firm has entered into with the big players in the industry. The below charts and numbers are from its latest financial statement that is available – FY2020. 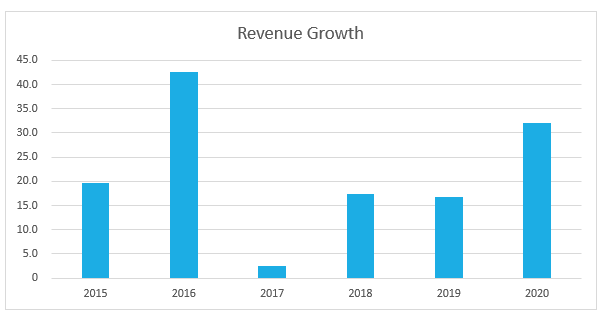 In FY2020, the company received US$32million in revenue, a 92% increase from FY2019. These all came from its partners as royalty for milestones and exclusive rights to their products. GmbH accounted for US$15million, while Tasly and Temcell accounted for US$10million and US$6.6million, respectively.

However, MSB’s operating expenses are US$82million, with R&D being the biggest contributor at US$56.2million. The firm has been losing money all this while, with its latest loss coming in at US$75m. These metrics should change if Mesoblast receives the approvals that are required to manufacture and sell its products. 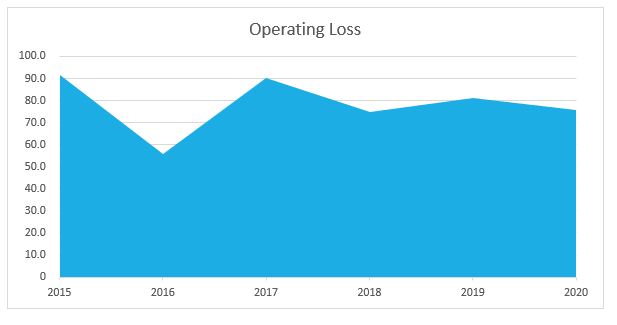 The health of the firm on the other hand, is positive, The firm has a cash balance of US$130million, and its short-term liabilities are US$90m – indicating that MSB has enough cash in hand to meet any short term debt obligations. Its total assets excel its liabilities by 4x – another good sign of long-term financial health that is required given that its business model can generate cash flows in the long run. 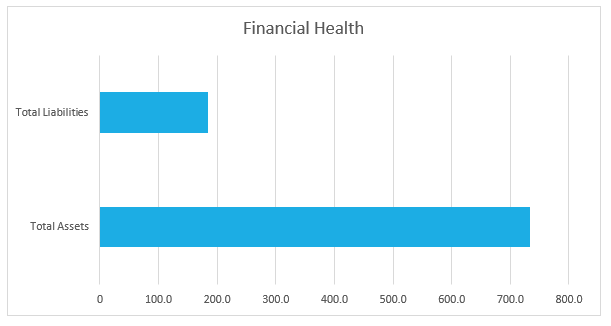 The capital structure of the firm is a sign of strength. The firm is mostly capitalised by equity at 85% and the rest by debt of 15%. A healthy mix given the cash burn it requires initially to develop its products.

Mesoblast is one of those companies that can surge 30% or plunge 30% depending on the nature of the announcement. The reason for these huge swings is due to the significantly large markets that their products target. A successful approval for 1 product is all it needs to become profitable, however, it is a rocky road to the top. They have a few products on its roadmap that are looking promising. We recommend members to exercise extreme caution given the volatility of Mesoblast, and for those members who are willing to take on the risk, we issue a “highly speculative buy”.