Markets seem to have over-reacted to the China growth plans. We recommend members to "Hold" their positions.

McPherson’s Limited (ASX: MCP) has had a whirlwind of a 2020. After posting revenues of $222 million, their highest in the past 4 years, the stock was soaring at a 52-week high of $3.4 a share in August 2020. This was driven by the increased performance and the boost is sales forecasts from an increase in Chinese demand. Much of this momentum dissipated quickly as geopolitical tensions between Australia and China, and supply chain issues caught up to the firm. The acquisition of Global Therapeutics from Blackmores Limited was not viewed to be positive by the markets, and the stock tumbled further. 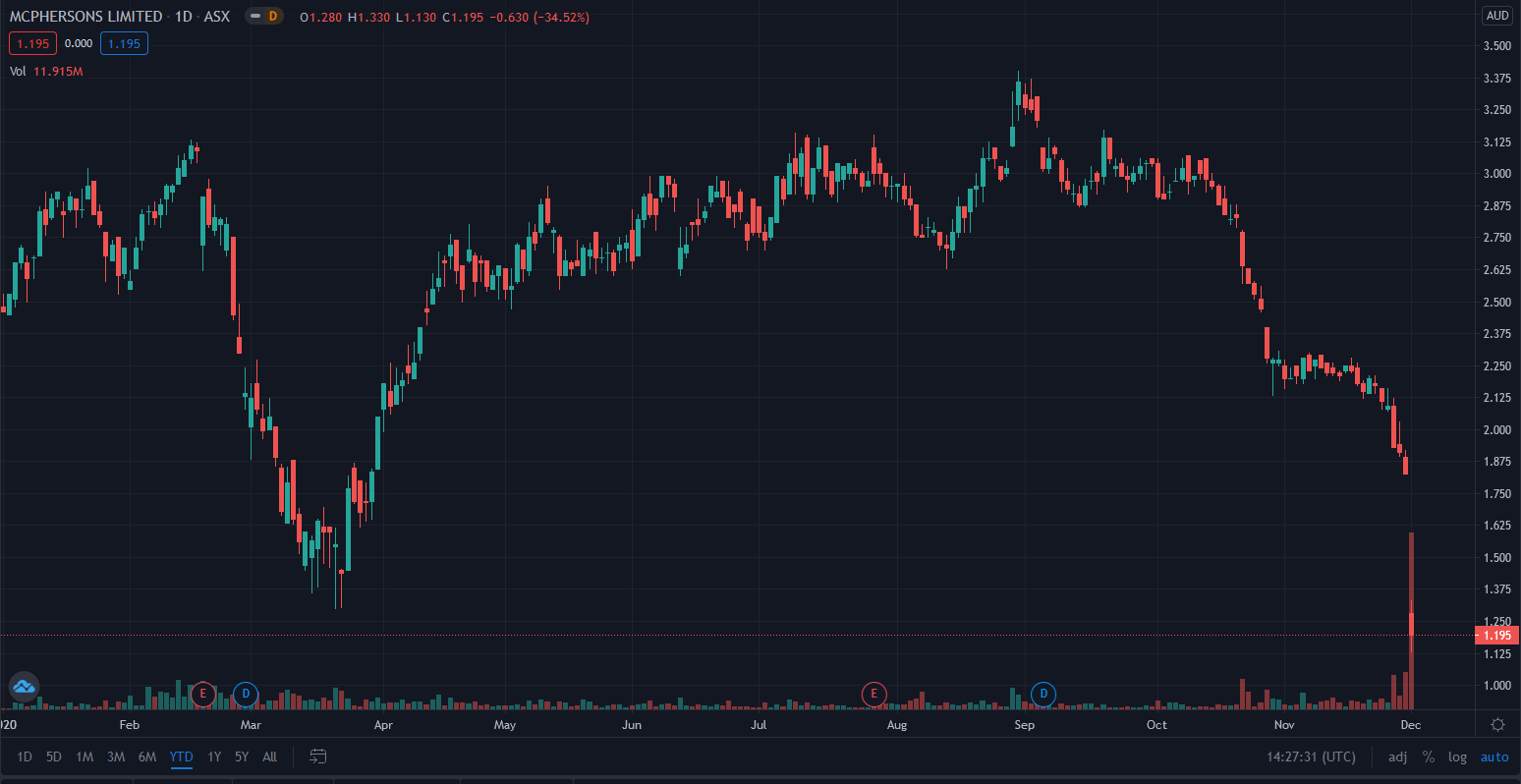 The Q1 FY2021 update that was released by MCP on the 20th of October was positive. The firm had seen a 4% growth in revenues and $2.9 million in profit before tax – an 84% increase from Q1 FY2020. Among the brands the firm owns, it has seen a strong 8% growth in sales compared to the same quarter last fiscal year. The CEO added that 4 of their 6 brands have increased their market share during the pandemic.

McPhersons raised $36.5 million in a fully underwritten institutional placement and another $10 million via a Share Purchase Plan (SPP) during FY2021. The funds from the placement is to be utilised for the acquisition, while the remaining is to be utilised for working capital needs and future M&As. This has not gone down well with investors and markets. The reason can be seen in the below chart. MCP maintains an average EBITDA margin of 11% over the past 5 years. This means that their business is heavily reliant on high volume sales. The acquisition of adds new products yes, however, the margins for Global Therapeutics products are low as well. An unaudited report that was published by MCP revealed that Global Therapeutics earned $19.5 million in revenues, which resulted in just $3.7 million in EBIT. This translates to unaudited margins of about 18%.

The narrative here is that – the acquisition does not bring much profitability to McPhersons, and the firm is in dire need of it. The earnings per share chart below shows how volatile the profitability has been. From a high of $0.13 in 2019, the EPS has dipped in half to $0.06. The acquisition was funded by equity following a raise, this means that the firm’s equity position is further diluted – which looks like it will impact the EPS in FY2021. Dividends, however, have been maintained by the firm. MCP has utilised debt to payout steady dividends to its shareholders when they do not have enough earnings.

MCP was on track to meet its guidance forecasts for FY2021. In early November, the firm reported that they were on course to outperform their FY2020 performance. The H1 FY2021 was turning out to be a strong period and MCP were confident of generating profit before taxes of 20% – 30% higher than the previous corresponding period. The guidance for full year FY2021 was expected to be in the range of 5%-10% higher than FY2020.

Much of this growth was to be delivered by the huge Chinese market. Singapore and New Zealand businesses were subject to being rejuvenated as well during the period. However, earlier today, MCP released a trading update with revised guidance forecasts for the first half year of FY2021. The FY2021 full year guidance was withdrawn.

Access Brands Management (ABM) is MCP’s joint venture partner for the lucrative China market. During November, the largest online trading event in the world was held and demand for the MCP’s products were below expectations. De. LeWinn’s products sales volumes had grown by 128% from FY2019 to FY2020. The negative response during the event has resulted in stockpiling of inventories, and the long-term demand for the product in question. Following this, MCP has reduced its 1H FY2021 guidance forecast to $7 million.

This has resulted in the stock price plummeting by 34.52% today. The average trading volume of MCP stock on the ASX during the past one year is 496,000. Today alone saw 11.91 million in volumes. Our narrative here is that investor mood and momentum has carried the stock to a low that is lower than its intrinsic value. McPhersons Australian sales is the biggest revenue generator so far for the firm. The demand here at home has been relatively stable. The firm has maintained that 5 out of their 6 brands have delivered revenue growth in the Australian market compared to last year.

MCP’s current business is steady in Australia and NZ. The dark side in their story is the growth story that could have been in China. While this has been dented, MCP is still a very stable and safe company. The balance sheet shows good financial health. The dividend policy is expected to continue. We recommend members to “Hold” on to their positions and not be swayed by the momentum seen in markets.