Magellan has a clear growth strategy in mind that is fuelled by M&A's and organically boosting its FUMs from the retail segment. We issue a "Buy" recommendation as Australia also recovers from the pandemic will also surely be a boost.

Magellan Financial Group Ltd (MFG) was first covered in September at a price of $56.87 a share. We urged investors who were already exposed to hold their position given the uncertainty in global markets.

Magellan is a fund manager that manages over $97 billion for its clients. The nature of the business exposes the firm to global market risk. The average funds under management during FY2020 was $95.5 billion – 26% increase from FY2020.

Funds under management is the biggest driver of revenue for Magellan. The economic uncertainty in global markets is still present. Until we have a vaccine for the novel coronavirus, it is rather difficult to estimate when countries would completely recover. While Australia and New Zealand look to have handled the humanitarian aspect of the crisis well, Europe and the USA are still experiencing waves of re-emergence of the virus. This has only increased the assumptions of how an economic recovery would look like. Experts have attached shapes to the recovery curve. The latest budget unveiled by the federal government in Australia has clearly assumed that the worst of the pandemic is behind us and new government policies are introduced to initiate a recovery.

The new budget will help the financial sector, especially the banking sector. There is little to no evidence to suggest that Magellan will gain from any of the benefits the stimulus will pass on to equities.

Management fees and performance fees that are charged to manage the FUM is how Magellan generates revenue. The operating expenses are the day-to-day expenses required to manage the fund (salaries, etc.). The difference between which determines how profitable the firm is. 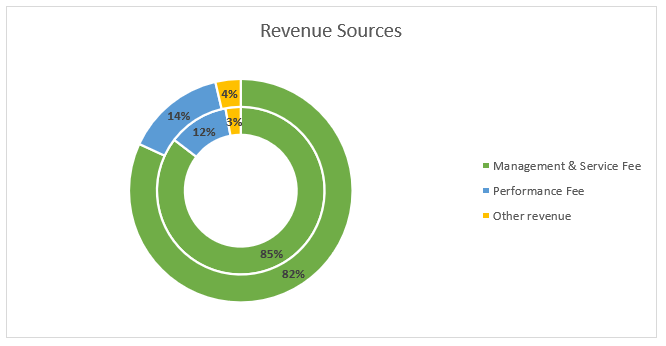 The stock has been subject to volatility since the recovery it made in March. Investors have reacted to buying and selling the stock based on how they feel about the overall outlook of markets, and especially the Australian market.

The stock went on an upward trend as the September update to its FUM showed a $1.198 billion increase from August. While retail only saw a minor increase, the institutional funds were where we saw close to a billion in growth. Much of the funds that came in have gone towards the Infrastructure Equities – which is expected as government spending across the infrastructure sector is set to increase. This may be a trend that we will see in most markets around the world. One of the most sure-shot ways governments revitalise the economy is by pumping money into infrastructure – thereby creating jobs as well in the process. The investments towards Australian equities have reduced. Given that most of the funds are coming from institutional investors, this is a good bet to forecast what they think about the Australian stock market in the near future.

Since the crash in March, the FUMs have been unpredictable. We have seen both – positive and negative changes. The positive outlook surrounding the economy in Australia may continue to increase the FUMs in the coming months. That being said, this assumption is dependent on Australia having already seen the worst of the pandemic – just like the new budget that was unveiled.

On the 21st of September, Magellan announced that it has invested $1.2 million in MFG shares and $90 million in cash in an Australian financial services firm – Barrenjoey Capital Partners. MFG has a 40% ownership of Barrenjoey.

As we have already gone into detail of how the firm has performed in FY2020 in our initial report, we would not go into it much again here. For those of you who missed it, we urge you to have a look at the previous report’s investment thesis where we broke down the financials. In a nutshell, the income statement and balance sheet of Magellan does not show adverse effects from the pandemic. This is fantastic. What we do see however, is a slowdown in growth.

The gradual increase in FUM’s that we have seen now tells us that the firm’s recovery is very closely tied to the economic recovery and how investors and retail traders perceive the state of the market. The cost to income ratio is a metric that is traced to measure how efficiently the firm operates.

Magellan has not decreased its staff numbers; however, they have reduced expenses by reducing bonus payments and salaries. The firm has also mentioned that it has not deferred variable bonus payments. All things considered; we expect the cost to income ratio to remain relatively stable. Operational expenses will increase if we continue to see further increases in FUMs.

Magellan is in the midst of a restructuring of its Global Retail Funds. Three of their funds are being consolidated into a single trust with two-unit classes – open classes units and closed class units. The restructuring is aimed towards increasing its retail segment. The retail segment is the one that will be the most important for further growth of the firm. Institutional FUMs already make up for 72% of their FUM as of FY2020. However, given the reliance on management fees for steady revenues, retail fees account for 46% of the base fee earned and has to be increased for sustainable growth in the coming years. The restructuring is being funded through existing resources and a debt facility.

The most important aspect of this launch is the lower cost pricing. The funds are priced at 0.50% management fees and MFG is looking to launch the new product by the end of the year. It is clear that the strategy ahead for Magellan is focused on improving its retail FUMs – which will enable it to penetrate more of the market and scale the retail segment.

The future looks clearer now than it did a month ago. The pandemic situation and affects surrounding it are a lot more positive with the new budget and Australia’s recovery path. Magellan looks like it has done well during the most crucial time and has posted high FUMs. The strategy to concentrate on the retail segment for growth looks to be a good one as it has much more potential than the stable institutional segment. M&A’s will also fuel growth as we go ahead. We recommend members to “Buy” with a long-term strategy in mind as MFG is poised to grow and pay good dividends.