A good growth stock, however, trading at a high price. We recommend members to "Watch" for now.

Lovisa Holdings Limited (ASX: LOV) is a fast fashion jewellery retailer with a market cap of over a billion dollars. They operate in 11 countries through 435 outlets (as of FY2020) that span across South East Asia, ANZ, Europe, Africa, USA, and the Middle East. Lovisa 100% owns all but their stores in the Middle East and Vietnam – that are franchises. The operations and inventory management for all of these stores are carried out from warehouses in Melbourne and China. All of their products are developed and designed by Lovisa – giving them significant control over gross margins.

Australia & New Zealand is the largest market for Lovisa. Their market penetration is immensely high in this region and they have derived an average revenue of $125 million over the past 5 years. Europe, and the largely untapped USA are markets where Lovisa is focussing to drive growth. During FY2020, the regional growth rate for USA and Europe were 223.5% and 14.7%, respectively. 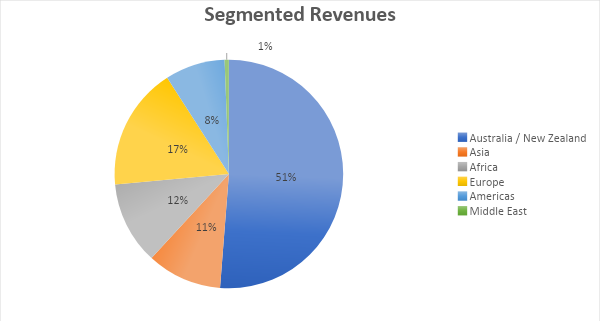 The business had been extremely impacted by Covid19 as store closures during lockdowns meant loss of revenue, while fixed costs remained for the outlets. During the end of March and early April, Lovisa just had 20 stores open out of their 435. Australia and New Zealand stores, which account for about 40% of all their outlets have been the first to bounce back as the management of Covid19 has been spectacular. By the end of May and early June, most of the geographical locations where Lovisa operates recovered from the first wave of the pandemic and sparked store re-openings. Lovisa has also used government wage subsidies to retain their work staff during these times.

Lovisa’s retail outlets help them build a strong brand, and this brand value has turned digital as well. Lovisa has digital stores set-up online in all of their operating locations. The online retail sales grew by 311% during FY2020, with Q4 ending June 2020, being the best performer with 382%. The firm has also recruited a Head of Digital & Marketing as the online business also takes centre stage moving forward. 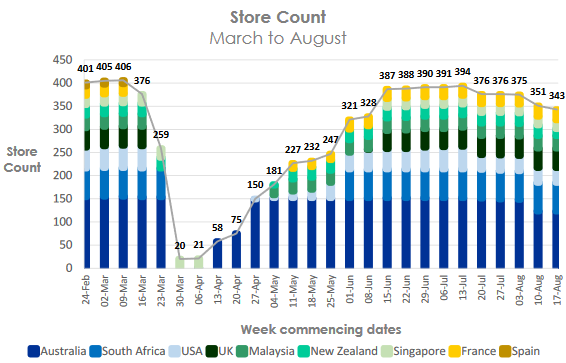 Covid19 slam dunked the stock price of Lovisa – going from a high of over $11 to a low of less than $2 in a span of a few weeks. The recovery, however, has been spectacular. The recovery of the entire retail industry has been a success story of the past couple of months since the government stimulus and economic policy decided to ease pressure by enabling Australians access to more discretionary income. The stock has returned 33.06% in the past 1 month and 53.88% in the past 3 months. The store count chart and share price chart during the same period is positively correlated. 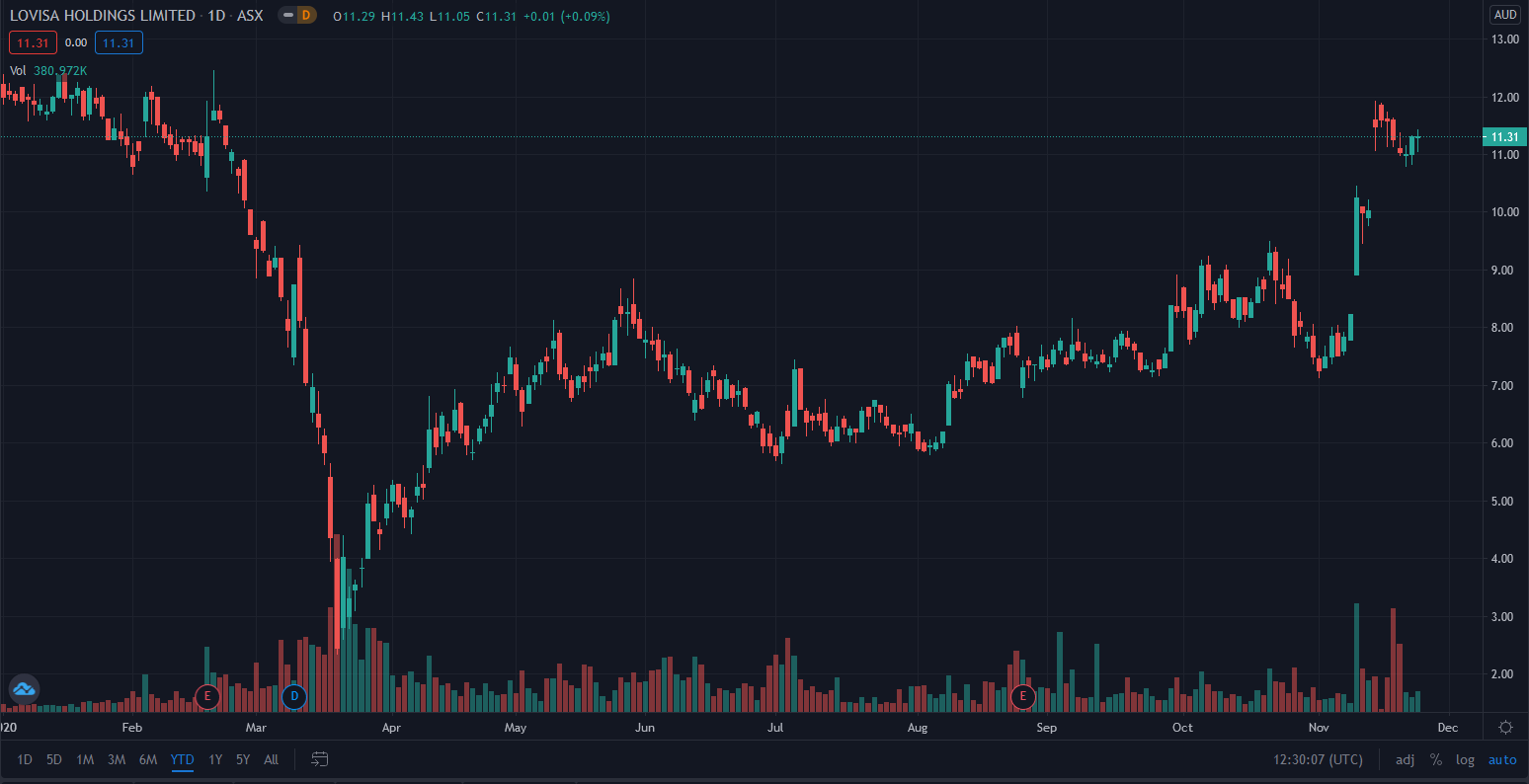 During FY2021, Lovisa has already been investing for growth amid the pandemic. The latest news coming out of the firm is the acquisition of 80 retail stores from beeline GmbH to increase its European presence. This transaction is being financed 100% by equity. The beeline stores will be converted into Lovisa and it is estimated to cost the firm around €5 million by the end of May 2021. With the acquisition, Lovisa is increasing its presence in Germany, Switzerland, Netherlands, Belgium, Austria, and Luxembourg. A further 30 stores of beeline that are located in France are under a Put Option agreement – giving beeline the option to sell the shares.

It has not been all good news for the firm though. Most of their European stores have been temporarily shut due to fresh lockdowns in the continent. The statement released by Lovisa accounts for all 24 stores in France and 40 stores in the UK have been shut since the 30th of October and 5th of November, respectively.

The global retail industry has endured Covid19 and it is showing signs of a rebound faster than most industries. Retail stocks are soaring, especially on the ASX as economic policy and stimulus has put more discretionary income in the pockets of consumers. This will be a common theme around the world as all developed economies rely on consumer spending to revitalise the economy as they play a significantly high role in the composition of the GDP.

One of the biggest headwinds the industry has faced due to the pandemic has been the disruption in supply chain and increased costs in freight and cargo to move their products – resulting in increased inventory costs. A shift to digital business models has relieved some of the pressure. However, for businesses that have productions in a single region and operate in multiple regions to sell their products, the headwinds around the supply chain have persisted.

The biggest headwind in the industry are the number of global competitors that exist. Much of Lovisa’s growth strategies in the future will thus be focussed on the American, European and the very high population density market of Asia.

During the first half of FY2020, revenues had grown 22.5% compared to the previous corresponding period. However, with the impacts of the pandemic, Lovisa revenues for FY2020 had shrunk by 3.2% as the firm reported $242 million. The growth in the digital business has offset much of the shortfalls the firm would have endured otherwise. Gross margins had reduced as well due to the increase in costs during the period.

Operating costs continue to remain high for the firm as they enter new markets and aggressively expand existing ones. Management of these cost structures becomes crucial in the future if the rebound in economic activity takes longer than what is currently expected. Marketing costs play a big role in the cost structure of the firm but have reduced during the year because the stores were shut. 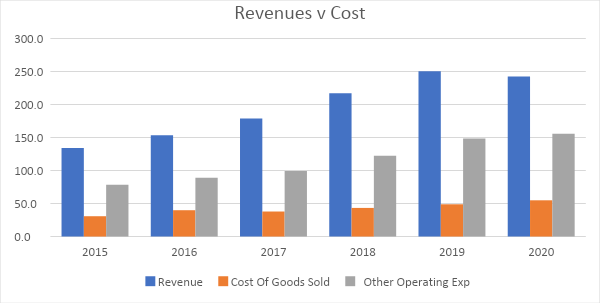 The revenue forecast is positive for the firm. We expect it to bounce back and surpass the high of FY2019 this financial year. We estimate the revenues to be in the range of $250 million to $275 million, with most of this revenue to be generated by its operations in the USA. Lovisa’s gross margins have averaged 78% over the past 5 years. EBITDA margins have been around the 25% range during the same period. We expect the EBITDA margins to increase over time as the firm’s marketing expenses will reduce as their brand grows. The entrance to new markets usually comes with high marketing expenses due to the aggressive strategies that Lovisa has used.

The net income for FY2020 was $11 million – a decline of 69%. The biggest reason for this sharp decline has been an increase in Depreciation & Amortisation expenses that was reported during the year. Capital expenditure for the year was $25.6 million – which included the addition of 60 new stores.

The balance sheet of the firm is strong. Lovisa ended the year with $21 million in cash. With inventories still high, the current assets stand at $50 million. The total debt on the balance sheet is $167 million, out of which $131 million is long-term. In the short-term, the firm has liabilities to the extent of $67 million. The debt facilities have been refinanced during the period and have been increased to $50 million.

The increase in assets and liabilities from the previous year is due to the aggressive growth strategy by way of acquisitions and retail store opening. Property, Plant & Equipment has increased by 2.95x and now stands at $275 million, compared to just $70 million in 2019. On the liabilities side, the firm went from a total debt of $8 million to $167 million.

In light of the disruption the pandemic has caused, the franking for the dividend has been reduced by 50%. The dividend strategy is still under review for the current year as the firm has reported that cash and capital requirements for growth will take priority over dividends.

Lovisa is a very well-run business with high sales volumes and fairly high margins. The financial health of the firm is sound, and the long-term outlook is positive. Significant growth is expected from the US and European markets and the firm has continued to invest during the crisis to support its aggressive strategy. Given the high price, we recommend members to closely “Watch” the stock and buy when it retracts marginally as our estimates value it below the current market price.