An early stage copper mining company with lots of potential given thier ability to be a low-cost producer of high quality copper.

KGL Resources (ASX: KGL) is a Brisbane based mineral explorer that currently owns 100% and is working on their Jervois Copper Project in Northern Territory. The project contains a JORC resource of 10.97 million tonnes at 2.03% Copper and 31.9 g/t Silver. Currently, KGL is working on determining the optimal development scenario at Jervois.

The stock has performed formidably during the past year. Since the Covid19 market crash in March, the stock rebounded very quickly and is now trading at its 52-week high. The performance of the stock has come amid good quarterly announcements, upgrades to project resources, grants of approvals from governments, and the soaring copper prices play a role as well. 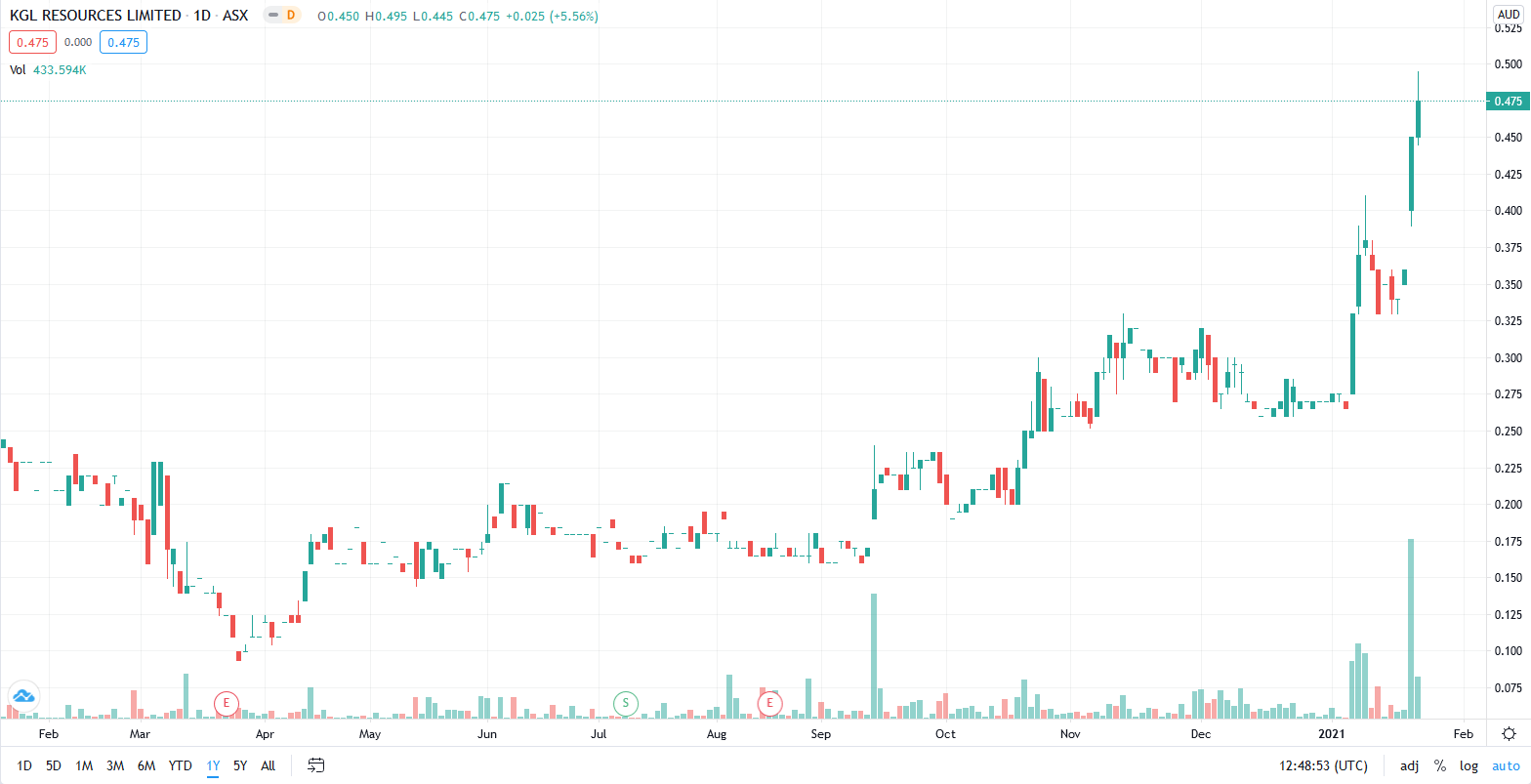 During December 2020, KGL conducted a Pre-Feasibility Study of the Jervois Copper Project to determine the potential viability of development of the project. The PFS study shows that the project has an average annual copper production concentrate of 30,000 tonnes over a 7.5 years’ operating mine life. The JORC Probable Reserves stands at 9.4Mt at 2.41% Copper, 32.9g/t Silver, and 0.39 g/t Gold.

The project has a pre-tax NPV of $177 million and pre-tax IRR of 23.1%. The payback period for the capital requirement is 38 months. This means that the operations will start paying for itself in just over 3 years, while the mine life is 7.5 years.

The pre-production capital requirement is $200 million. The costs of operations for the life of the mine are about US$1.6/lb copper. Life of Mine AISC is US$2.25/lb copper.

With the pre-feasibility study complete and positive, KGL is now working on the feasibility study and drilling programs that find additional resources or reserves that have the capacity to increase the mine life to 10 years. The PFS has assumed that the concentrate will be transported by road to Alice Springs and then by rail to Adelaide for export, and KGL is believed to be working on cost reduction measures.

One of the bigger pieces of the jigsaw when it comes to mining are government approvals. The Northern Territory Government has approved the mining management plan that was put forth for the development of the Jervois Project.

Copper has been a very hot commodity for a few months. Currently, copper prices are at 7-year highs after rebounding very quickly from the crash in March 2020.

Copper prices are very sensitive to the global economy. The metal is extremely important to the manufacturing and infrastructure industries that usually determine economic activity. As global economies were put on a standstill, the price of the commodity took a pounding during March and April. However, since then the price has been climbing. Again, China is the largest importer accounting for about 30%-35% of global imports. The quick recovery of China has ensured that the demand for the commodity does not fall as other economies were put to a halt. On the supply side, Chile and Peru are the largest exporters of the commodity and they were under strict lockdowns – impacting productions and leading to a shortage in supply. A weak US dollar during the period has also added to the copper price increasing. News of a vaccine and return to normal are all fuels to the demand for the commodity during 2021. Another very important consideration to be made here is that a shift to renewable sources of energy will increase the demand for copper in the future.

The outlook for copper is robust. The medium-term demand is expected to increase as government spending programs will keep boosting industrial metals. Copper prices are forecasted to hit all time highs by the end of 2022 as economies completely recover from the pandemic.

In the long-term, the demand for copper is going through the roof. Copper is a very essential commodity and is at the centre as we shift away from traditional energy sources and into renewable sources of energy. Annual global production of 40 million tonnes of copper will be required to meet the demand for the metal. This will fundamentally lead to an increase in prices in order to maintain equilibrium.

KGL has a high-quality copper resource project and is expected to be a low-cost producer of the commodity. With a pre-tax NPV of $177 million and IRR of 23.1%, the Jervois Project has a payback period of 38 months. The annual EBITDA forecasts are high considering the high copper prices that are estimated to sustain.

The total revenue that can be generated from the current deposit level is $2.46 billion over the course of the 7.5-year mine life. Taking into consideration the operating costs, the total EBITDA for this period is estimated to $823 million. With KGL working towards increasing the life of the mine by finding additional deposits, these cash flows can further increase – leading to higher valuations. The drill rig is already believed to have commenced to look for additional deposits.

The cash balance of KGL at the beginning of the year was $5.16 million. The December quarter saw net cash flow of $234 million. Most of the money was spent for staff costs and administration costs. KGL also received interest and government grants/tax incentives during the period. The calendar year 2020 showed a cash burn of $981 million – averaging about $245 million a quarter. At this rate, KGL has enough cash to take it through the next few quarters as far as operations are concerned. However, it will have to raise additional capital for project finance in order to develop the Jervois Project.

The balance sheet of KGL is very strong. This de-risk the investment for investors. They are capitalised completely by equity and have no debt on their balance sheet. The only liabilities that KGL carries are $700,000 of current liabilities and $38,000 of long-term lease.

KGL has a very high-quality Copper resource that has potential revenues of over $2.4 billion. These potential revenues are backed by the high price forecasts for copper in both – the medium and long-term. KGL has been making steady progress and a Feasibility Study is underway. The firm has also started looking for investors for project finance. KGL has zero debt on its balance sheet and is in a very healthy position with enough cash for operations. We issue a “Buy” recommendation for long-term investors.