Booming sector and a recovering business means high profits for Incitec. A "buy" from us

The America business operates through Dyno Nobel Americas segment, which manufactures and sells industrial explosives and related products and services to the mining, quarrying and construction industries in the Americas. Recently, we have seen that Incitec also has a small presence in Turkey. The charts below show us how Incitec diversifies its revenues by both – business segment and geographically as of their FY21 half year earnings.

The explosives segment caters to the mining sector, primarily here in Australia. With the increase in mining amid the boom in the sector, it is a fair argument to point out that Incitec’s explosives segment should be performing extremely well. As they say – they’re always blowing stuff up in Western Australia. Coming to the fertiliser segment, Incitec is again favoured by industry tailwinds as the Australian farming sector is booming and producing at very high capacity. Seasonal rains have been favourable this time around and the export of agricultural produce is buoyed by high inflated prices.

Geographically, Australia is therefore expected to perform extremely well as both the exposed industries are backed by tailwinds. In the USA, it is slightly different. The USA is a lot more impacted by the pandemic and most recently forest fires and drought. Operations in the USA were thus impacted by outages, however the management has taken up the fix as a priority and IPL is on track to resume full capacity operations

The first half result was impacted by COVID delays, scheduled turnarounds as well as some unplanned manufacturing outages. Underlying explosives and fertilisers business performance was strong, reflecting the continued uptake of IPL’s premium technology offering as well as the resilience of their end markets. Americas and Asia Pacific explosives businesses performed well on the back of growing momentum from customers for IPL’s premium technology. We are expecting technology growth to pull through in key markets of Australia and the US, along with other markets as they recover from the pandemic. The fertiliser business returned to profit during the half as the firm responded to stronger seasonal outlook for rain and commodities.

In the latest half-year report, half-year ended 31st March 2021, Incitec Pivot reported Net Profit After Tax (NPAT) of $36 million, a decrease of 44% compared to $65 million in the previous corresponding period (pcp). The 1H21 result was adversely impacted by a net $73 million due to a reduction in manufacturing production volumes, resulting from three planned plant turnarounds and unplanned plant interruptions. Higher commodity prices, partially offset by a strengthening Australian dollar, had a net favourable earnings impact of $25 million.

During the period, Production rates in Australia were largely in line with expectations, performance in the US at Waggaman, LA, Cheyenne, WO and Louisiana, MO, were impacted by unplanned outages. These issues have been resolved with the exception of Waggaman. IPL’s top priority is to ensure the Waggaman plant returns to full operations and an expert taskforce with internal and external resources is in place. Manufacturing Excellence remains on target to deliver A$40-A$50 million earnings upside across the portfolio, with timeframe for delivery moved back 12 months to FY23 to reflect COVID delayed turnaround schedule and resourcing plans. 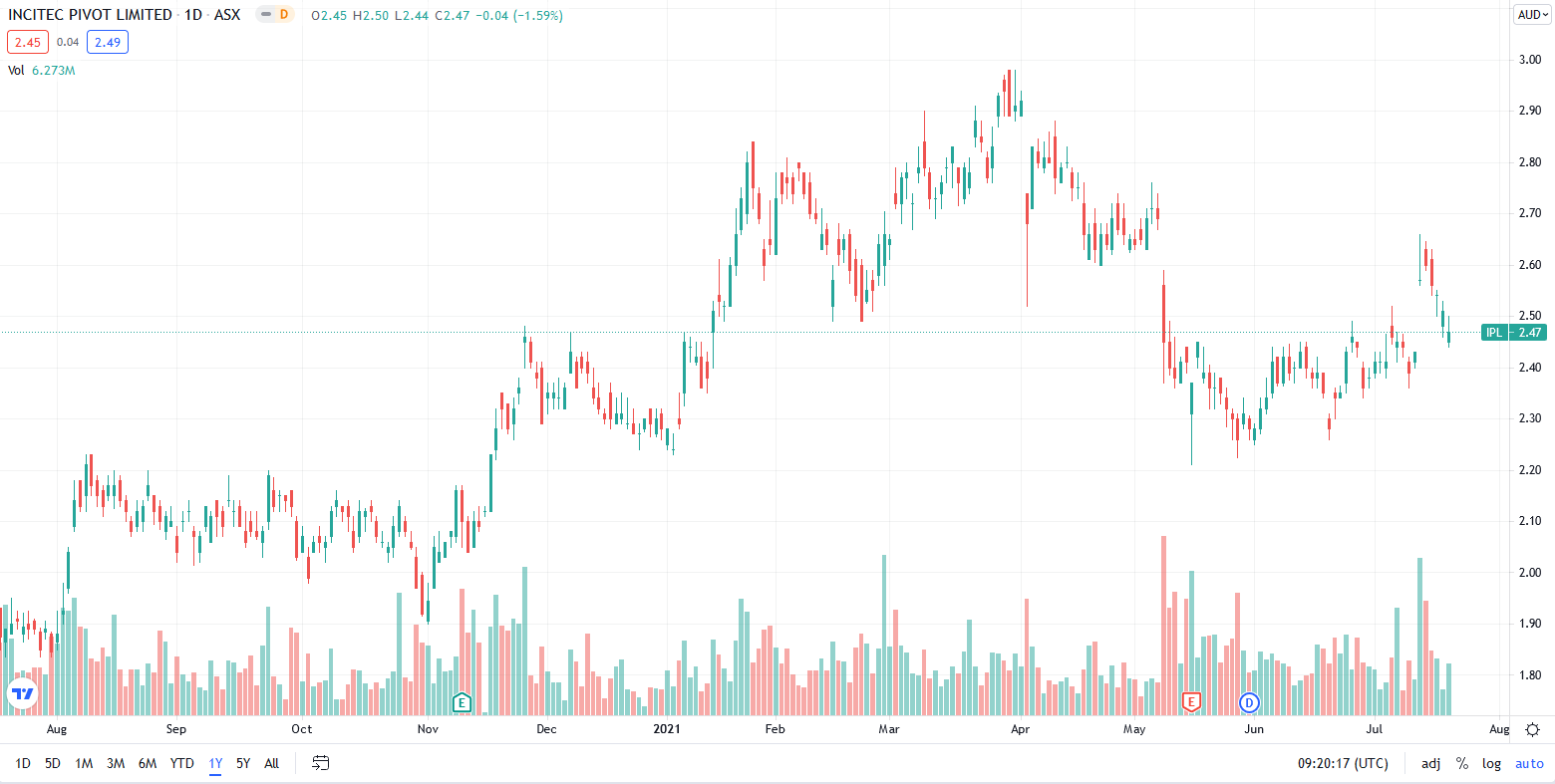 With segmental improvements and a few challenges in the manufacturing department ensured that IPL’s result was a mixed bag – resulting in the share price coming off during March. Since then, the stock price has been moving sideways and we reckon this is a good time to enter a position as IPL is expected to return to normal levels of production soon. Of course, the booming mining and agriculture sector always helps!

In the American Explosives segment, IPL caters to Coal, Base & Precious Metals, and Quarry & Construction sectors. 80% of their exposure is non-coal in this segment and the outlook is fairly positive. Volume growth expected across all sectors with strong Gold and Copper prices supporting mines as they recover from FY20 COVID-19 closures. Sales volumes are expected to grow in the 2H vs FY20, driven by mine recoveries and technology driven market share gains. In Australia, the Explosives segment is exposed to coal by up to 50% and Iron Ore making up the rest. Both these markets are expected to support high mining activity. Coal demand is coming back in several parts of Asia and well, we all know how well Iron Ore is doing.

In the Fertilisers segment, IPL caters primarily to Cotton, Broadacre Grain, Extensive Pasture, and Sugar markets. Water availability expected to support improved cotton market with potential upside for increased volumes in Q4 and FY22. In the pasture market, record beef prices and top 10% sheep meat prices are supportive of fertiliser demand (growers investing in pasture upgrades). When it comes to Sugar, there is a constant year-on-year growing demand.

Global fertilisers prices traded significantly higher in 1H21 with realised Ammonium Phosphate prices improving by more than 45% compared with the pcp. There is resilient demand in explosives and fertilisers. While the firm itself has not been materially impacted by the pandemic, IPL are working towards a ‘Response Plan’ where the firm is looking to cut costs and increase profitability.

PL’s financial Response Plan remains on target to deliver sustainable cost savings of $60m per annum by FY22. $20m of the target $30m FY21 target savings were delivered in 1H21. IPL is Targeting technology driven earnings growth of 10% by FY22. This should come from their Premium Technology Products, thus mitigating some of the long-term impacts from the decline of the coal industry (where explosives are mostly used). In the short-term, however, the coal market is projected to expand, and demand is forecast to increase as Asian countries return to normal levels of economic activity. In the manufacturing segment of the business, Delivery was delayed by close to 12 months due to COVID-19 impacting turnaround schedule. The North American performance was also under pressure due to outages and IPL is known to be treating this as a priority as the firm rebounds from the temporary disruption.

The biggest boost though will come from the fertiliser segment here in Australia. There is a strong performance in Australia capturing commodity price recovery and for IPL, in excess of $25m profit to be realised from sale of manufactured product on hand on 31 March 2021. The firm is well positioned to leverage favourable market conditions and commodity strength in 2H21. 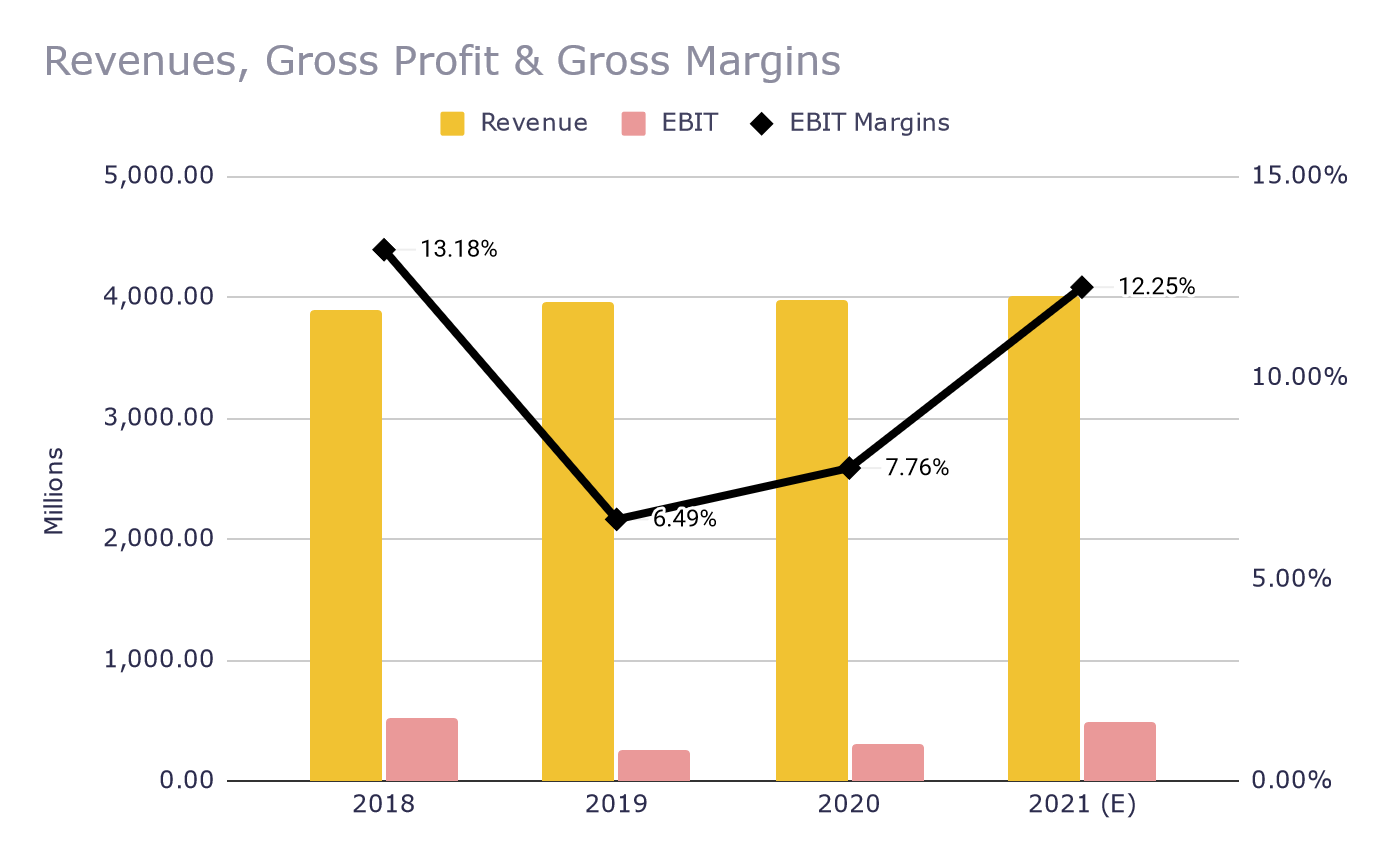 While IPL’s business model is not associated with high margins given the costs involved in the manufacturing process, the company has been progressing well on their path towards increased profitability. In the chart above, we can see that EBIT margins have been on the rise in the last few years. The FY21 estimate is expected to yield a revenue growth of 2%, but an expansion in the profitability with EBIT margins increasing to over 12% for the first time in 3 years.

The strategic initiatives should boost Return on Capital. In the past two years, ROIC has been 3.2% and 3.6%. However, the increased profitability through the initiatives taken on by the management and the overall positive macroeconomic positives for the agriculture and mining industry is estimated to push it higher. 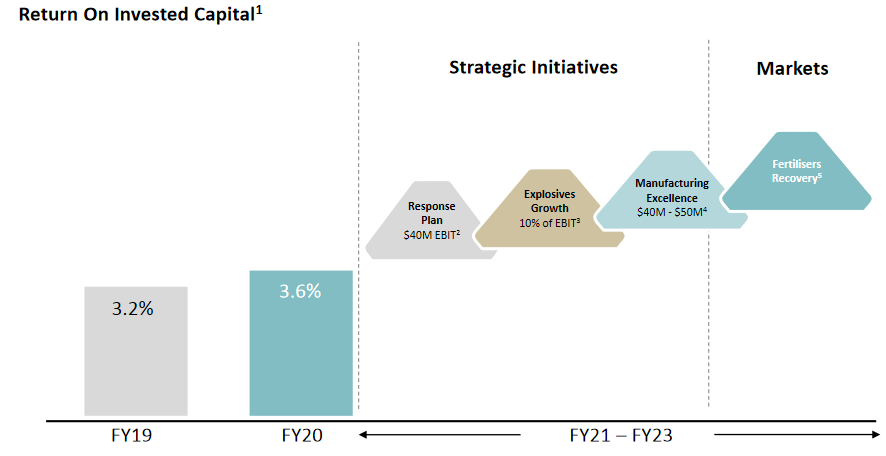 IPL only paid a dividend of 1 cent per share in H1 FY21 due to the effects of the pandemic. However, the firm largely tries to maintain their dividend policy of 30%-60% of Net Profits after Tax. Valuation looks fairly cheap for IPL. The shares have come-off quite a bit (as we mentioned earlier) due to manufacturing impacts faced in the USA. The numbers in the table below also reflect how the company is priced – that is, IPL is priced on the basis of the firm being able to implement its strategy of cutting costs and increasing their earning, while revenue estimates are relatively flat. IPL’s earnings in 2H21 are expected to benefit from a more pronounced seasonal swing than normal due to strong commodity prices, improved plant uptime, realisation of unsold manufacturing volume in stock and improving end markets. 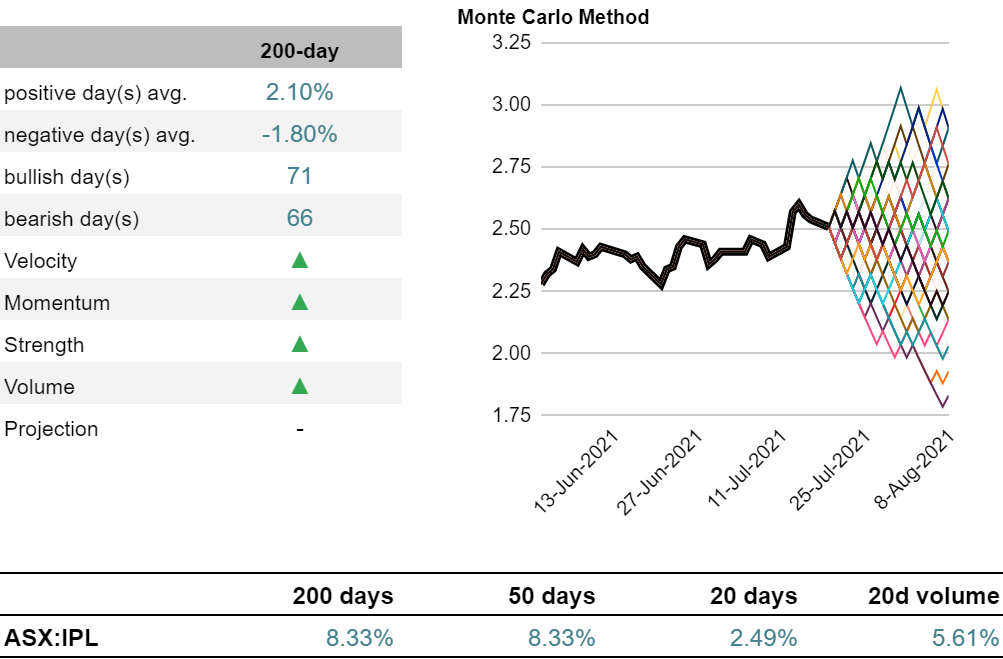 IPL has been under selling pressure throughout 2020 after the March sell-off at the peak of the pandemic. Incitec share prices were trapped below the key level of $2.25. This multi-year key level has been challenged several times during the first half of 2020 before a breakout occurred in mid-November 2020. IPL went up all the way to near $3 per share before heading back to its range between $2.60 and $2.25 which is now Incitec’s price equilibrium. Since the second half of 2020, Incitec has recovered by more than 55% since the COVID-19 market crash. However, IPL is still 39.8% behind its pre-COVID level. We have recently seen the formation of a symmetrical triangle pattern on the daily chart which is a positive sign as it may suggest the beginning of a build-up of long positions in the $2.60 – $2.25 range. Hence, we can anticipate a potential breakout and the return to a bull-run toward our primary price target of $3. Our view is also supported by the RSI indicator which exhibits a bullish pattern as it perfectly holds the trend line. Furthermore, the RSI is a tad above the 50-level which confirms that IPL is still pretty bullish.

The nearest support is the $2.40 per share which is also the 78.6% Fibonacci retracement from the early-2021 swing high. The main resistance is sitting at $2.62 which is the 50% retracement level. Once a clear breakout of the resistance at $2.62, IPL will then have to challenge the $2.81 level which will act as the floor to launch the shares all the way up to $3 and beyond.

Volume slightly increases since the last 200-day with the 20-day volume average down by 5.6%. The price action remains neutral in the near term, evolving in a range between $2.60 and $2.40 per share. 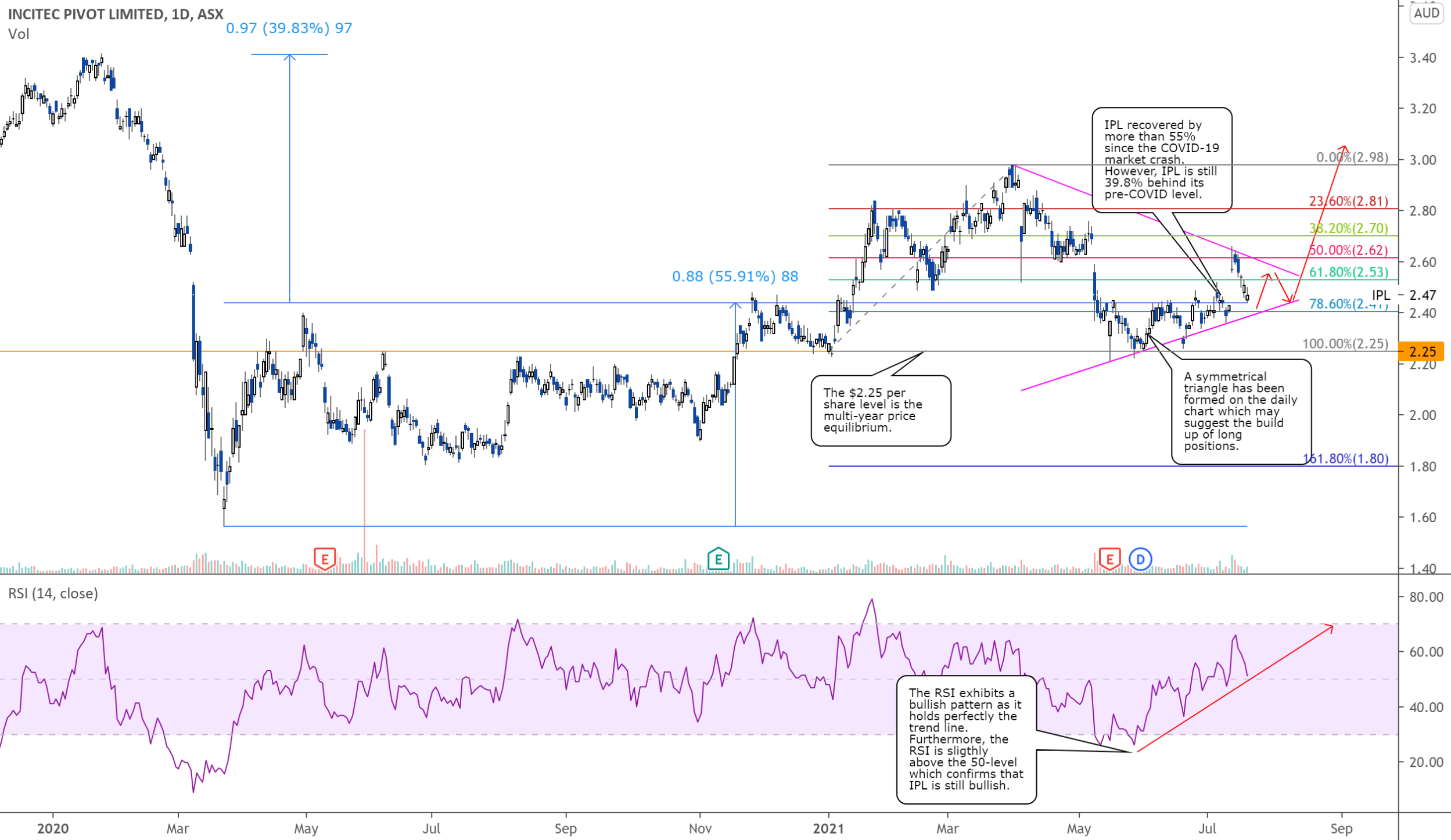 Given the boom in both – mining and agriculture sectors, Incitec Pivot is optimally positioned to take advantage of the macroeconomic tailwinds. On the microeconomic point of view, the firm is working to restore their impacted manufacturing units in the USA to full capacity. With a favourable support level at $2.4 a share and a positive outlook for the company, we recommend a “Buy” at fairly modest valuation multiples that the stock is currently trading at.