A cannabis stock that is in its clinical stage for the development of products that have a wide array of applications. We recommend members to "Buy" given the tailwinds that support Incannex. 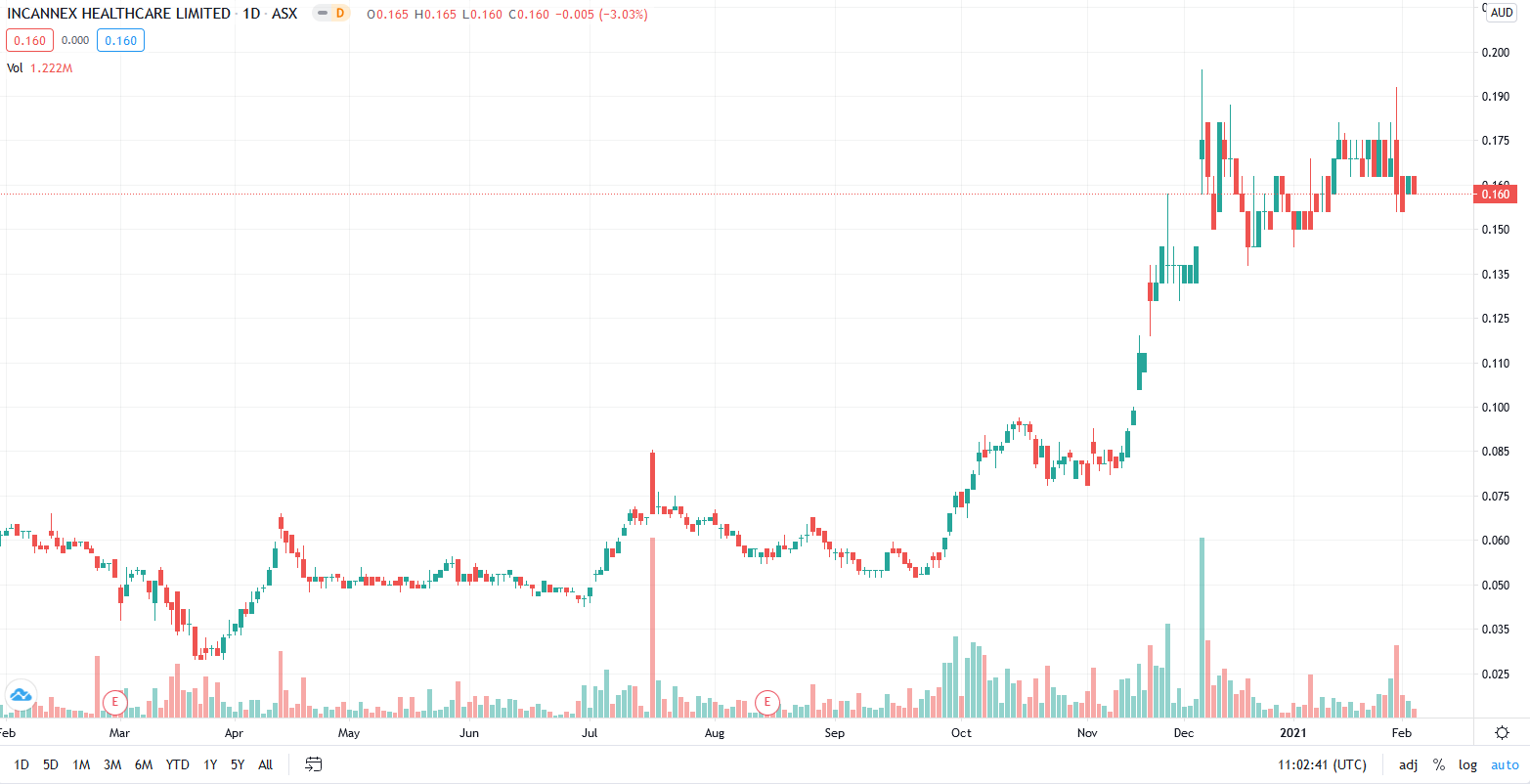 During FY2020, IHL made major changes in its business strategic plan. The company has renamed its firm in the process and had completed the divestment of its dental business branch. IHL is now fully focused on the development of several medicinal cannabis products to cure a range of diseases. IHL approach is to expand its revenue streams with SAS sales and from future drug sales post-registration. The recent record sales of IHL demonstrates the company’s capabilities to leverage its proprietary products to supply the ever-increasing high demand for medical cannabis.

Incannex progresses rapidly in the development of its proprietary drugs

IHL has reported its significant advancement in a few products which are now in phase 2, the last phase before the trials (phase 3) and FDA approval. Looking ahead, we consider that IHL is on the right track to becoming a global leader in medicinal cannabis treatments. The company demonstrated its strong potential in research and development required to get its drugs registered. Moreover, FY2020 saw IHL significantly improved its balance sheet geared toward growth.

The four flagship products that IHL is developing can potentially reach a combined market of US$ 33B per annum. The global sleep apnoea (OSA) market size is valued at USD$ 5.9B in 2019 and is estimated to grow by 7.4% CAGR while the global traumatic brain injury assessment (TBI), acute respiratory distress syndrome devices (SAARDS) and generalised anxiety disorder market (GAD) are expected to expand by 7.3%, 7.2% and 2.5% CAGR, respectively. TBI market valuation is estimated at US$ 2.7B (2019), while GAD market is to reach US$ 7.5B by 2023 and SAARDS market US$ 16.9B by 2027.

According to Grand View Research (2020), the global cannabis cultivation market is expected to expand annually by +14.3% CAGR. The cannabis market size was valued at US$ 123.9B in 2019. The progress is likely to continue with the adoption of cannabis treatment of chronic diseases and legalisation is a key factor for growth. The number of patients increases from 1,000 to around 50,000 since the legalisation of medical use of cannabis in Germany in 2017 according to the Bank of Montreal (2019).

IHL may be exposed to risks arising from the company use of financial instruments to support and develop its business operations. We have recognised the following risk that can significantly impact on the performance of the company: 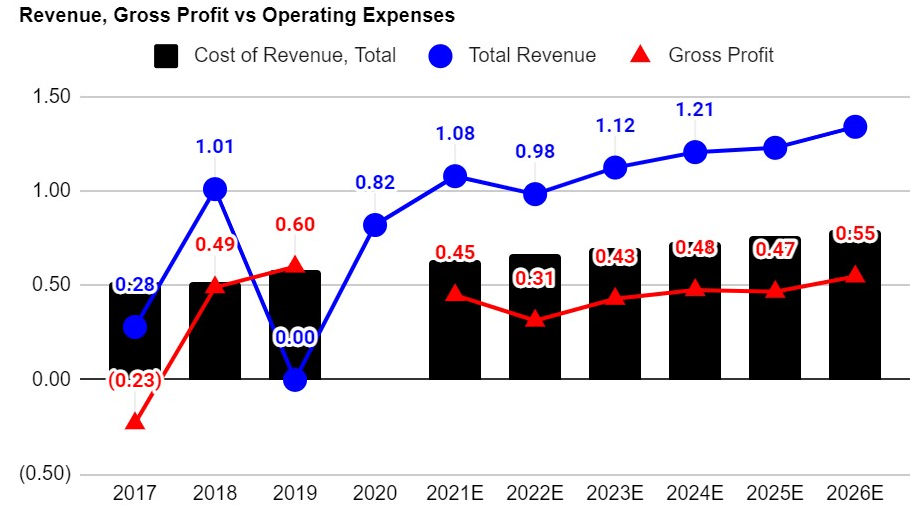 After a continuous decline in the company’s liquidity since 2017, IHL is now back on track with projected liquidity ratio to stabilise above 1.55, 1.35 and 1.22 for current ratio, quick ratio, and cash ratio, respectively, resulted from FY2020 improvements in the company’s cash position. 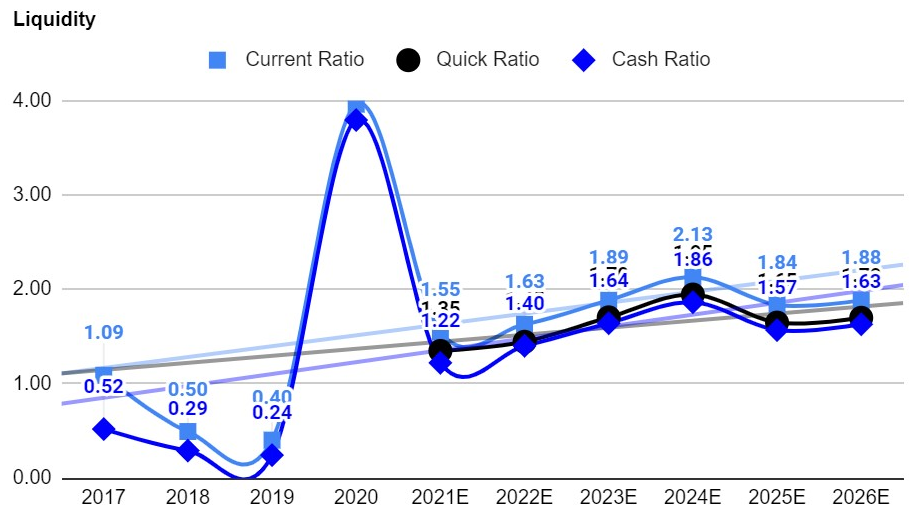 Since End of March 2020, IHL recovered by 50% of its decline from its 2014 high at A$ 32.5 cents per share, an upside moves by 450%. IHL is now pausing from its rally just below the 50% retracement level after an attempt to break this level which is currently acting as the immediate resistance at A$ 17.5 cents per share. Volume has declined by 15% since the last 20-day period which may hint an imminent re-test of the support at A$ 13 cents per share. We believe the 13 cents level might offer an opportunity to scale up a long position.

IHL is currently trading between the 17.5 cents and 13 cents level. 17.5 and 13 cents are important levels and represent the 50% retracement and 61.8% Fibonacci level. A$ 20 cents represents the psychological level which we believe if a clear breakout of this level occurs, IHL might rally toward 25 cents and beyond. On the other hand, a drop below A$ 10 cents might spark a sell-off and might push the price lower toward 5 cents per share.

Volume decreases since the last 200-day with the 20-day volume average down by -15%. The price action remains bullish in the near-term, evolving in a range between A$ 13 cents and 17 cents per share. 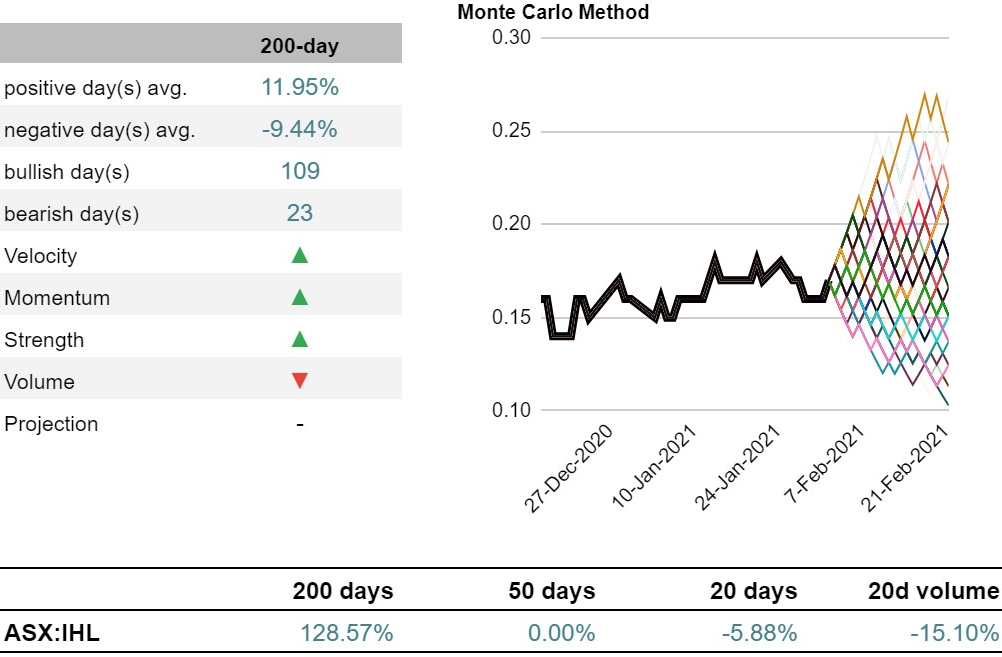 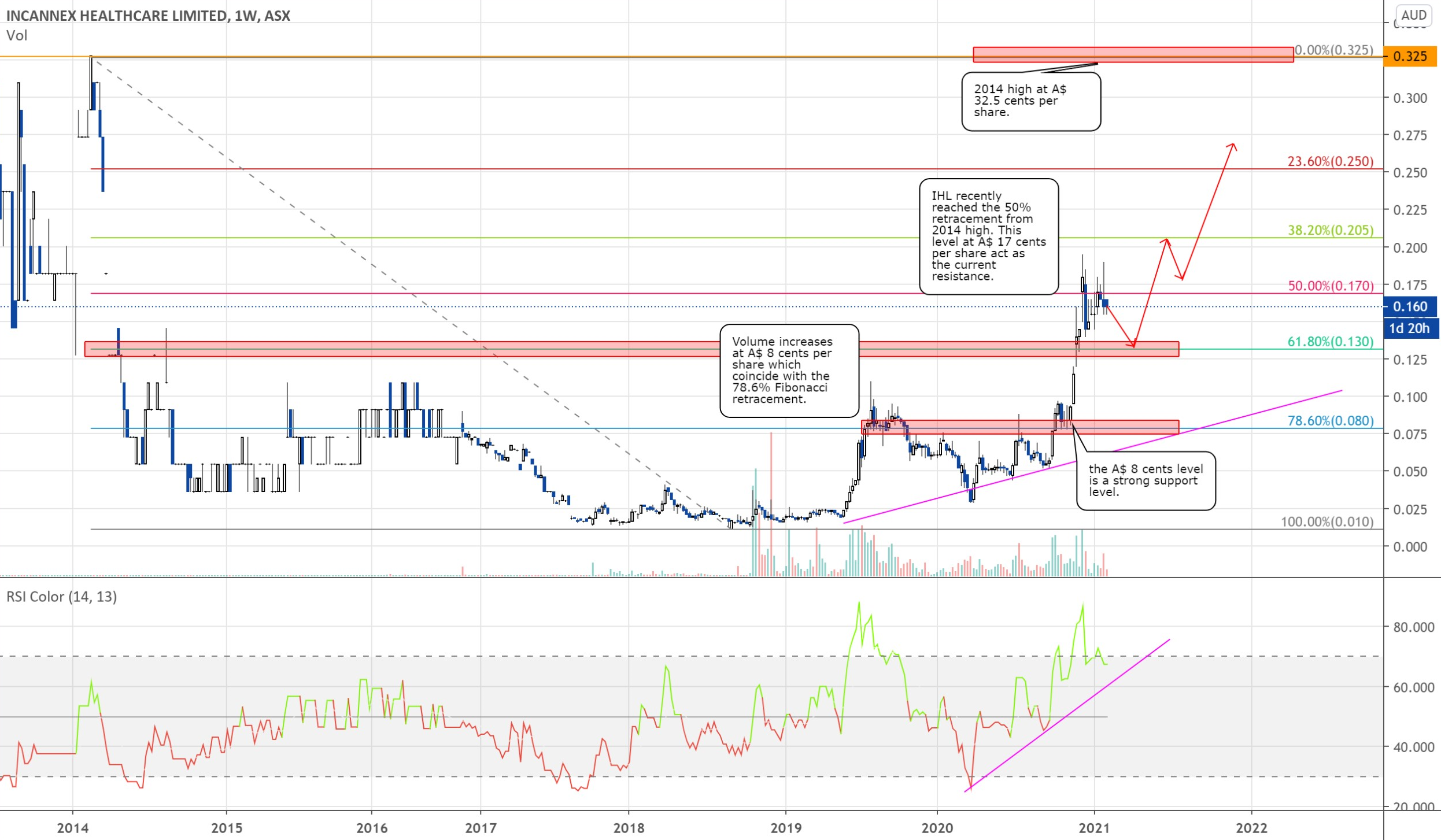 We are issuing a buy recommendation on IHL with a target price at A$ 37.4 cents per share, a prospective gain of +133%. We recognise the capabilities in Incannex to grow alongside the medicinal cannabis market. The cannabis market is expected to expand by +14.3% CAGR from 2020 to 2027. We consider IHL fair value to be at A$ 414M which is based on the recent company’s revenue growth and the forecasted cannabis market expansion. We believe IHL to exhibit an attractive risk/reward with a downside risk of ~12.5% and an upside potential superior to +133% on a 200-day horizon.