Horizon Oil shows a strong balance sheet and expanding production that can also take advantage of the soaring crude oil prices. We recommend a "speculative buy".

Horizon Oil Ltd (ASX: HZN) is an Australian oil and gas exploration, production, and development company. They have a well-balanced portfolio of conventional oil production in New Zealand and China. In China, it holds its interest in the Block 22/12 oil field in Beibu Gulf and engages in the exploration and evaluation of hydrocarbons. While in New Zealand, the company is involved in developing and producing crude oil from the Maari/Manaia oil field.

The company with foreign joint ventures Roc Oil and Majuko Corporation has been a participant in the petroleum contract for Block 22/12 since 1999. The block is located in the Beibu Gulf of the South China Sea and continues to generate approximately 70% of the company’s cash flow. As of FY20, the gross daily production rate was above 8,600 bopd. The company’s first production from Block 22/12 occurred in 2013 from the Weizhou 6-12 and Weizhou 12-8 oil fields and since then Horizon has maintained its production level for the last 7 years through infill and nearfield drilling, installation of additional water handling capacity and production optimizing well workovers.

During the year, the group’s interest in production from the Beibu Gulf fields was uninterrupted by Covid-19, with 907,886 barrels of oil produced and crude oil sales were at 833,071 barrels with cost recovery volumes of 2,474 barrels. The average cash operating costs including workovers for the year were $11.38 per production.

For the quarter 31st, March 2021, the two well infill drilling campaigns comprising the WZ6-12-A11 and -A3S2 wells were completed with combined initial gross production test rates of 2,473 bopd. Following the successful completion of the recent two-well infill drilling program, the gross production was approximately at 9,500 bopd and net sales for the quarter were at 204,148 bbls.

Horizon with its joint venturers OMV New Zealand and Cue Energy has the Maari and Manaia oil-producing fields located in the Taranaki Basin. Maari/Manaia continues to generate approximately 30% of the company’s cash flow. As of FY20, the gross daily production rate was approximately 4,000 bopd which was impacted by the shut-down of 3 wells (MR6A, MR7A, and MR9) with the Operator advancing plans to work over these wells. The overall production declined rate was reduced through continued water injection.

In FY20, Maari/Manaia fields produced 567,676 barrels of oil and crude oil sales were at 594,450 barrels. In November 2019, Jadestone Energy Inc. announced that it had executed a conditional sale and purchase agreement to acquire OMV New Zealand Ltd’s 69% interest in the Maari project and it continues to further extend the long stop date for the transaction to 30th June 2021, owing to delays in the regulatory approval process.

The gross production increased by 1% for the quarter of 31st March 2021 to an average of 5,295 bopd due to the successful completion of workovers to the MR7A and MR9 wells and with continued water injection into the fields. The workover to the MR6A well commenced in late March is expected to be completed over the coming weeks with the potential to restore approximately 1,000 bopd to field production.

The share price has outperformed ASX 200 Index. The company experienced another strong quarter, due to increased production levels and low cash operating cost. As a result, Horizon’s stock price has increased by nearly 50% since the start of 2021. The stock is gaining momentum this month and is currently trading at $0.087. 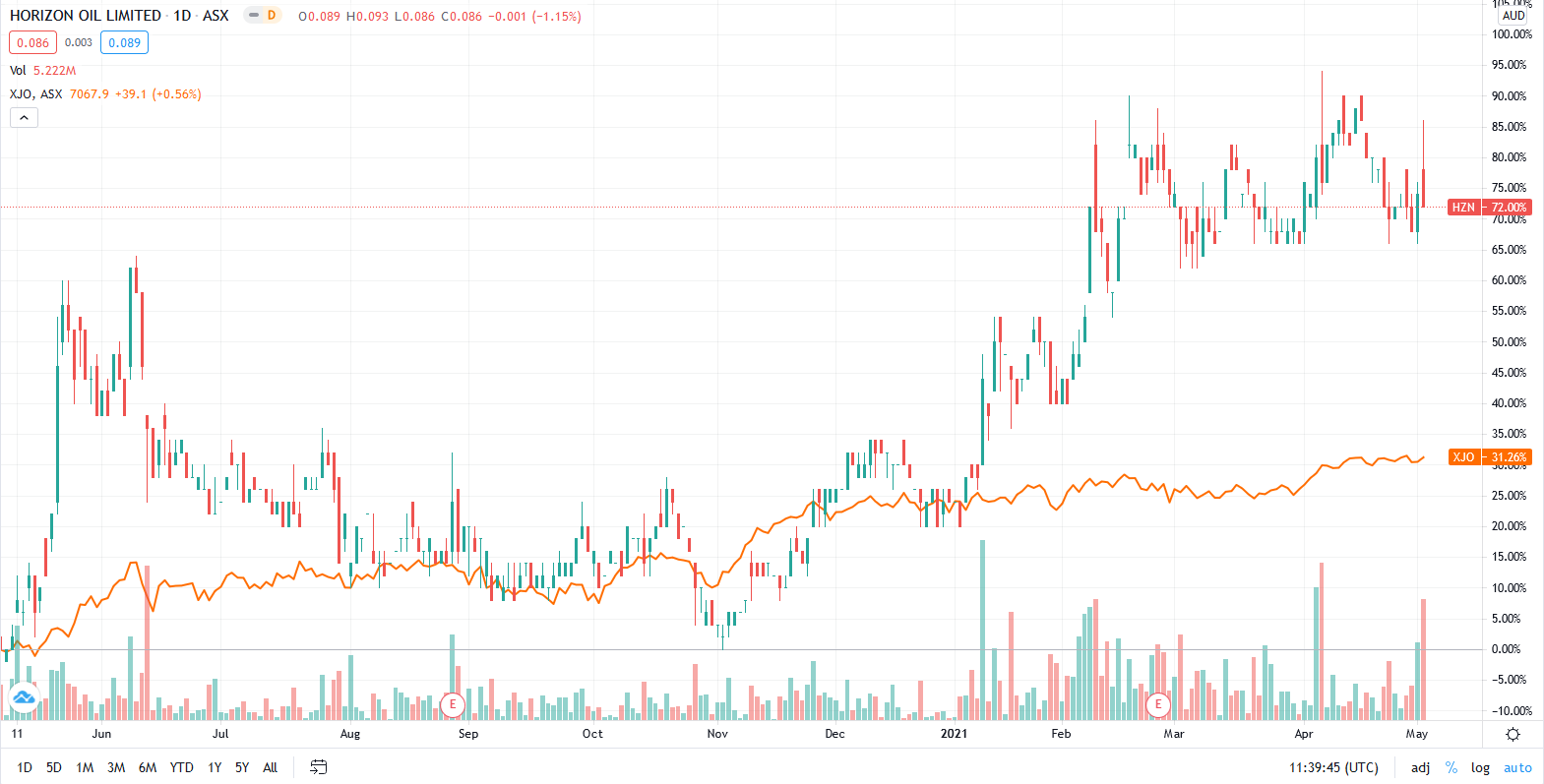 Crude oil has been the most volatile of all major commodities during the Covid19 crisis. We even saw negative oil prices due to the excess supply in the market as economic activity fell. In the long-term, however, much of the oil prices are controlled by OPEC – an organisation in the Middle East that determines the supply levels for the commodity. This adds a lot of risks that are not diversifiable. Starting from November when the news of a vaccine broke out, crude oil prices depict a steady incline curve. 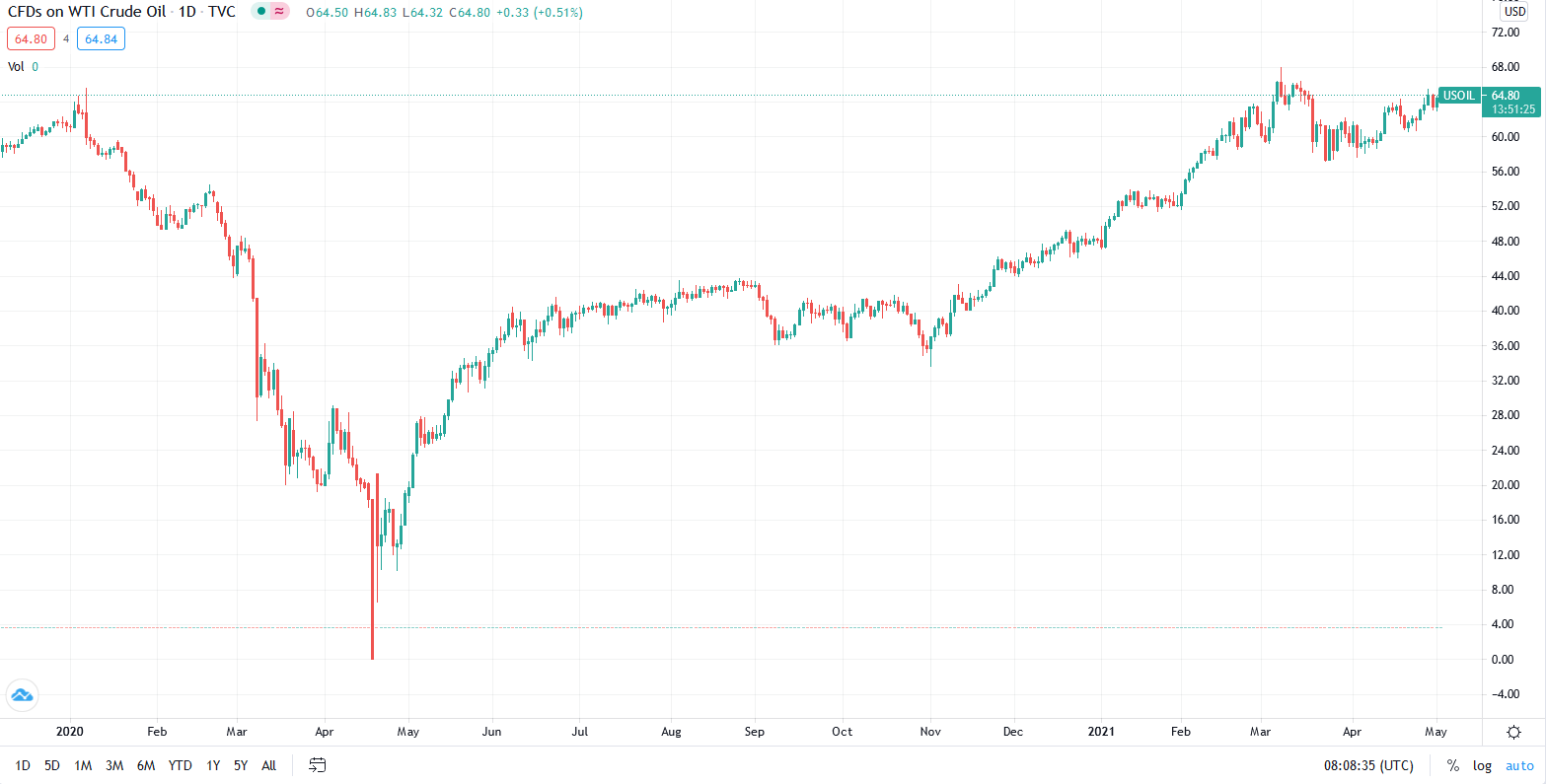 Increased economic activity especially among the Western or richer countries by virtue of both – shrinking Covid19 cases and increased stimulus packages has increased the demand for oil. The easing of travel restrictions by the European Union is also weighing in on the demand for the commodity as a resumption of flights among European nations will play heavily into a resurgence of economic activity in the continent. US Crude Oil (WTI) has thus risen 116% in the past year and 34% already in 2021. WTI is currently floating around US$46.5 a barrel (levels seen just before the coronavirus crisis in 2020), while Brent Crude hovers around US$67.6 a barrel.

The short-term risks to consider in the oil prices are:

On the supply side, OPEC+ has started to reduce the curbs around crude oil production that was in place since the price collapse in 2020. On the whole, while the soaring second wave in India does cloud the demand outlook for oil, the increased economic activity in the USA, Europe, and China is expected to push up prices as supply may not be able to catch up with the demand – indicating that oil prices will be fairly bullish for the remainder of the year.

Horizon reports its financials in US Dollar – the currency that oil is traded in. The H1 FY2021 results for Horizon were very positive for the firm. They are indeed a low-cost, cash generative oil producer at a very early stage in their business cycle. Horizon produced 1.4 mmbbls (million barrels) of oil from all their projects during 2020. Of these, 1.3 mmbbls were sold, which means that the firm holds very little inventory relative to its production numbers at a time when the oil demand was extremely low. 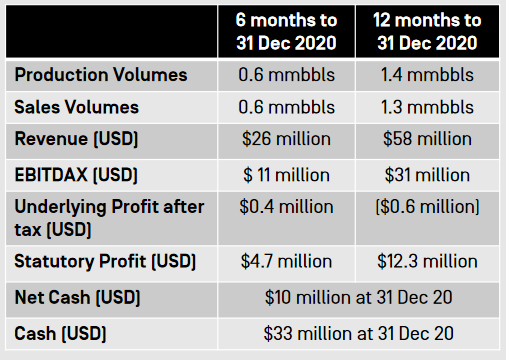 To combat low oil prices during the period, Horizon has been able to reduce its operating expenditure.

The low-cost operations mean that the production of oil is at a higher margin at Maari and Beibu. Horizon has increased its net cash position to US$10 million during December and they are debt-free. This has enabled them to report US$33 million in cash reserves during the period. At the half-year mark, HZN had 300,000 bbls of oil swaps to mitigate the impact of oil price volatility. These swaps have a weighted average fixed price of US$50/bbl. This indicates that their production and revenues are fairly hedged for the remainder of the year. Horizon Oil has usually managed to sell about 650,000 bbls in a half year.

The company has been strengthening its balance sheet. Horizon Oil has decreased its debt considerably and they have been performing on market share buy-back to distribute excess capital to shareholders. The board has also determined a target payout ratio of 30% through dividends in the future. The company also generated US$3.5 million in the half-year by the divestment of their PNG assets.

The finalisation of the Group’s PNG asset portfolio divestment during the period provides the opportunity to reset and focus on the Group’s cash-generative assets, deliver sustainable returns to shareholders, and grow the company.

To sum up, Horizon Oil has the below advantages:

The outlook for Horizon Oil is fairly robust. They are not hedged yet for their FY2022 oil sales. Therefore, the company will be able to take advantage of the soaring oil prices – leading to higher cash flow and hence higher dividends as the firm is looking to payout 30% of Net Profit after Tax as dividends.

Horizon Oil is also looking to bolster production with:

The Group’s short-term focus is on – continued optimization of product performance from the Beibu and Maari/Manaia fields, progressing the Beibu Gulf fields WZ12-8E field development, continued evaluation of nearby prospects in Block 22/12, and evaluating growth opportunities to complement existing oil production assets. 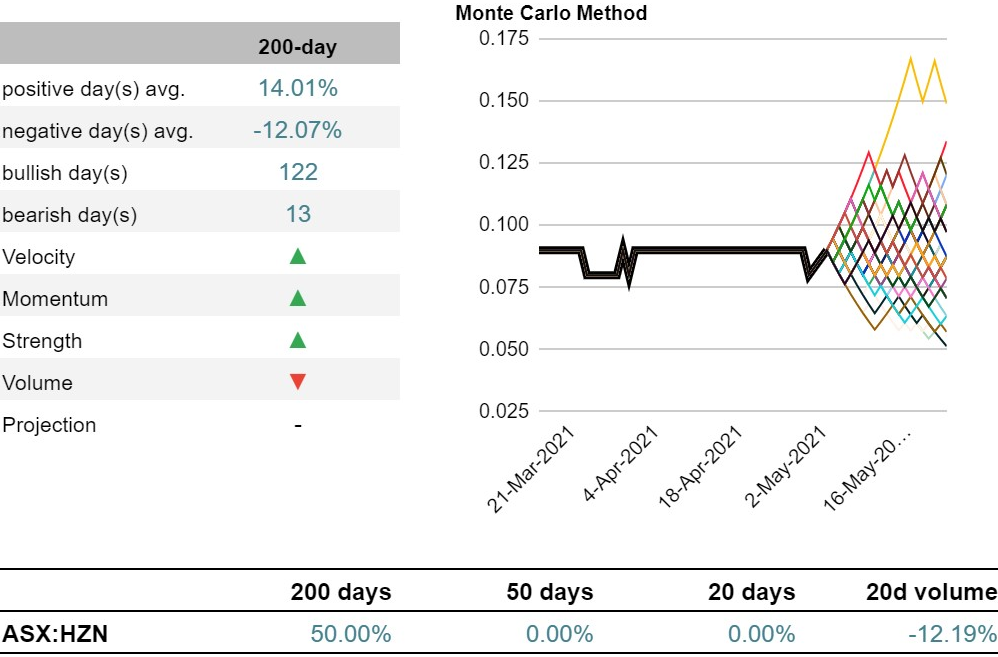 HZN dipped significantly during the peak of the COVID-19 market sell-off in April 2020. HZN shares plummet from about A$ 13 cents to it’s all-time low at 4.2 cents. Despite a massive drop, Horizon remained more resilient than crude oil. Horizon’s share followed the same path as crude oil prices, consolidating and trading mostly sideways throughout 2020. As of November 2020, crude oil returned to a bullish momentum, actively recovering back to its early 2020 level. HZN recovered as well, however, the stock remains largely below its pre-COVID level trapped below its mid-term resistance of A$ 10 cents per share. On the other hand, crude oil is by far outperforming Horizon, approaching its pre-pandemic level. HZN A$ 10 cents per share represents a key resistance level. A breakout of this multi-year key level will signal a potential rally back to 2020’s highs. On the contrary, a breakdown of the A$ 8 cents supported by the 61.8% Fibonacci level from Feb-Mar-20 swing low may trigger a selling pressure driving HZN share price back below A$ 7 per share.

HZN currently found its price equilibrium at A$ 9 cents per share. The immediate support level is the 61.8% Fibonacci retracement level from the January-March-2020 swing low. On the upside, the nearest resistance is the multi-year key level sitting at the psychological price tag of A$ 10 cents per share. A clear breakout is necessary to initiate a rally toward the next key resistance level at A$ 14 cents per share. On the other hand, if HZN drops below A$ 8 cents, we may see Horizon’s share going back down to A$ 6 cents.

Volume slightly decreases since the last 200-day with the 20-day volume average down by -12%. The price action remains neutral in the near-term, evolving in a range between A$ 8 cents and 10 cents per share. 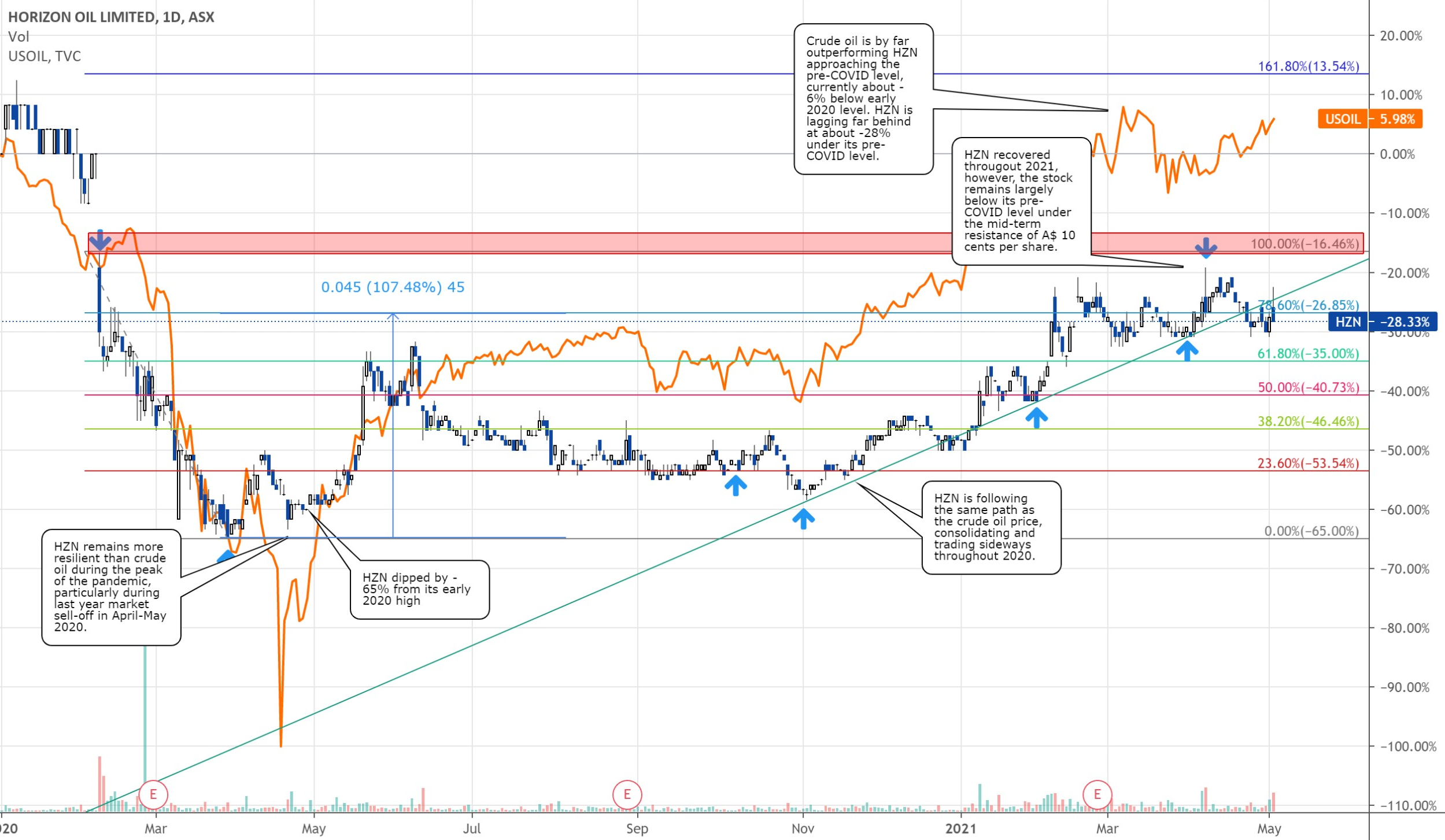 Horizon Oil shows a strong balance sheet and expanding production that can also take advantage of the soaring crude oil prices. The assets are backed by strong fundamentals that are underpinning stable production capacity and also continually lowering production costs. Board has taken up share buy-backs and is looking to instill a 30% dividend payout going forward. We recommend a “Speculative Buy”.