FGR is looking to commercialise its low cost, high grade graphene. We recommend a "Buy"

Graphene has many industrial benefits. Scientists have known about the potential of graphene for a while now, but it was not until 2004, that two professors Andre Geim and Kostya Novoselov were able to effectively extract graphene from graphite. This remarkable step in science earned them the Nobel Prize for Physics.

Graphene offers endless possibilities with such astounding properties and is predicted to be the material that would change the world. Scientists are hoping to develop stronger, more powerful batteries that are so small they could be sewn into your clothes. Graphene is a fantastic enhancer. This material has a unique molecular composition which could make it one of the smallest and most useful filters. Another breakthrough application could be the development of seawater filtering into drinking water with graphene.

This resource is currently expensive to precisely extract in large quantities. However, there is a company that may be able to solve this issue and that is First Graphene (ASX: FGR). 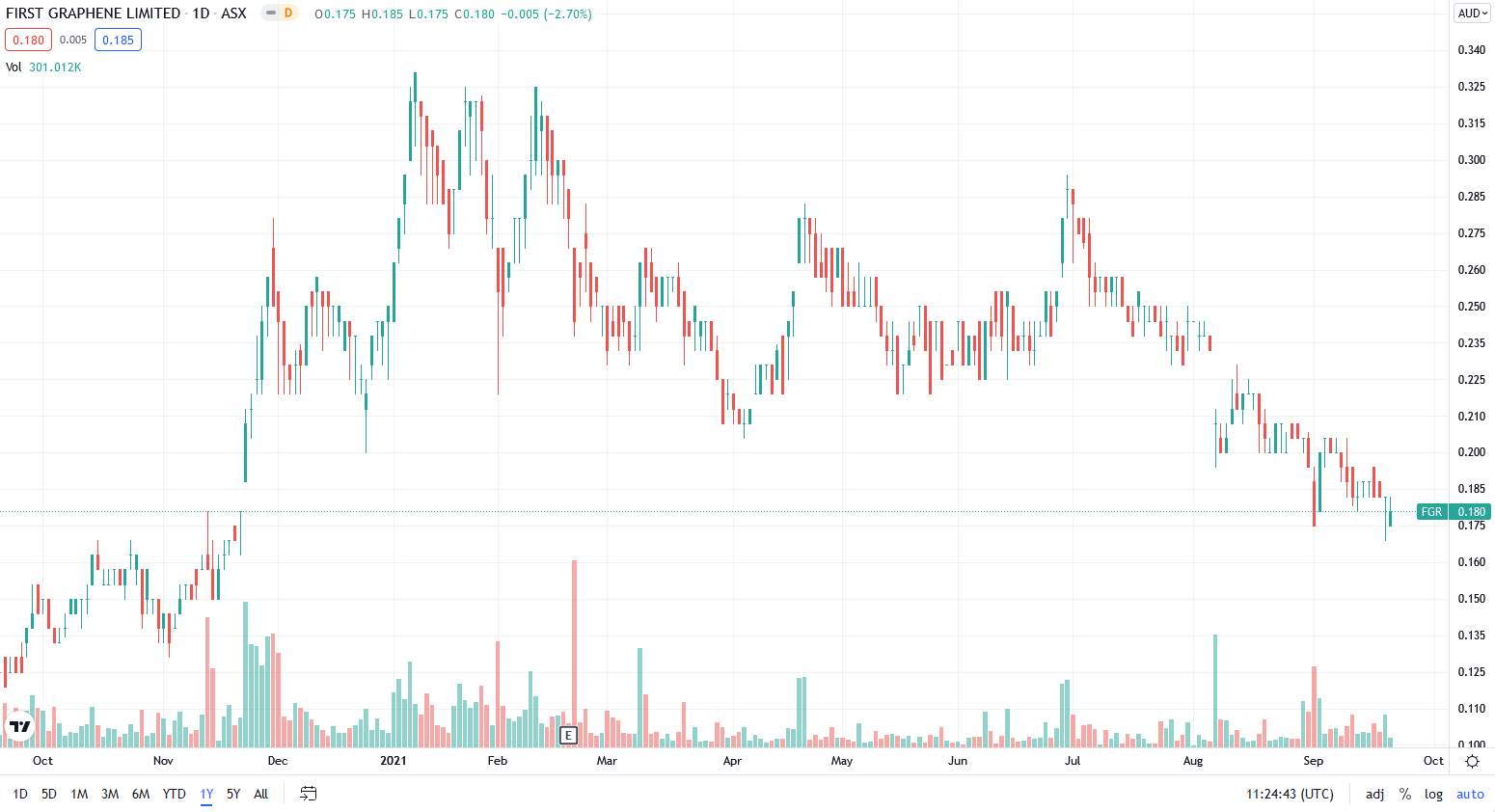 First Graphene is the leading supplier of high-performing graphene products with a robust manufacturing platform and an established 100 tonne per year graphene production capacity. The company is developing its flagship product named PureGRAPH. It is a high-performing graphene that is easy to use and is enhancing the properties of products and materials across industries and applications worldwide. In our opinion, graphene has been often underrated by the market. We believe this material will revolutionise the future across industries and that FGR has all the necessary foundations to expand along with the massive growth in demand for this material. Hence, we have identified some key highlights that confirm that FGR is one of the upcoming hot stocks:

To emphasise the importance of graphene, the European Union has committed to an equivalent of $1.62 billion to this revolutionary new material. What is the quality of graphene that drives excitement in the industrial and political sphere? Well, it is a material made of a single layer of carbon atoms; graphene has properties that make researchers drool. It is hundreds of times stronger than steel and a much better conductor than any of the materials now being used in electronics.

There is one very hot subject now, and it is about the future replacement of silicon in electronic circuits with graphene. But this material has a wider industrial application than you could imagine. Hence, when you think about it, it is two hundred times stronger than steel of the same thickness. It is highly flexible and can stretch up to 20% of its length. Graphene is also fully impermeable even to helium gas. Moreover, this material is one million times more conductive to electricity than copper. There are a lot more properties that give graphene an edge over other materials.

Graphene’s properties have supported its use in industries ranging from aerospace to water filtration. Demand for graphene is expected to expand at a compounded annual growth rate of ~38% to $1.49 billion by 2027. Currently, the graphene industry is trying to overcome manufacturing, technological and cost barriers. So far, we see in FGR high capabilities to tackle these challenges as a vertically integrated company with an efficient production process in place.

Graphene’s unique properties are the primary reason for increasing demand for the material. Graphene has various formulations such as powders, nanoplatelets, foams, dispersions, oxides, and nano-films and each of these formulations have different applications. Graphene has found relevance in industries such as aerospace, composites, electronics, biomedical technology, and energy.

FY22 – FY25 outlook: FGE seeks to position itself in the lowest-cost quartile of global graphene suppliers

The graphene industry is currently at a nascent stage and most of the product is currently used for research and development activities. However, the industry is seeing rapid growth in commercialisation and should reach around $1.49 billion in the next five-year period. The market size is estimated at $109 million, suggesting the industry could register a CAGR superior to 38% over the upcoming five years. Graphene has limited applications today and is primarily used in batteries, supercapacitors, anodes, and loudspeakers. However, by the second half of FY24, graphene’s application areas are expected to widen to aerospace, water desalination and automotive. Support from governments, private investments and major markets is expected to fuel the growth of graphene in the near future. The rapid increase in the number of patents filed for graphene-based products provides a good indication of efforts to commercialise the industry.

FGR plans to position itself in the lowest-cost quartile of the global graphene suppliers. We are strongly convinced that the company will be able to dominate the graphene market by FY25. Hence, FGR holds supplies of high-grade graphite and has the manufacturing capability to convert it into the highest-quality graphene.

FGR is actively working toward the commercialisation of its products by developing applications in various fields such as energy storage devices, coatings, and polymers. FGR’s aim is to vertically integrate itself in the value chain of graphene production from reliable sourcing of raw material to the development of applications for the industry along with relevant intellectual properties for licensing and sales. We appreciate the fact that the business has a very clear strategic roadmap in place. Since FY20, sales in tonnage terms were concentrated on the fields of polymer strengthening and wear resistance. For applications in composites and concrete, the company is at the stage of qualifying trials and is progressing toward the development of supercapacitor and battery materials.

With a supporting nascent market fuelled by new graphene industrial applications and solid production capabilities, we believe that FGR could achieve operating breakeven levels before FY25. Thus, current customers have contracted for 5.5 tonnes per annum. Meanwhile, planarTech sourced two hundred kilograms in CY20 and is expected to increase sourcing to one tonne annually onward FY22. The manufacturing break even for the Henderson facility is 6 tonnes per annum, based on production costs of 10 tonnes annually.

More importantly, FGR has a clear sales focus on the following immediate sectors which comprise, (1) rubbers and elastomers, (2) cement and concrete, (3) composites and plastics, (4) coatings, and (5) energy storage.

As the demand for graphene is primarily driven by the development of renewable energy, government support, and the evolution of electronics, we have conservatively estimated FGR’s revenue to grow by a CAGR of 11.7% from currently $1.3 million to $1.81 million by FY24. This estimation is based on the expected expansion of renewable energy technology which will be the primary user of graphene. The electricity produced around the world from renewables is anticipated to reach 30% by the end of FY23. On top of that, the electronics market is the fastest-growing area for graphene technology. It accounted for around 36% of the graphene market globally in 2019 and is expected to exhibit significant growth in the future. Growth is primarily expected to be driven by use in semiconductors, transistors, capacitors, and sensors. 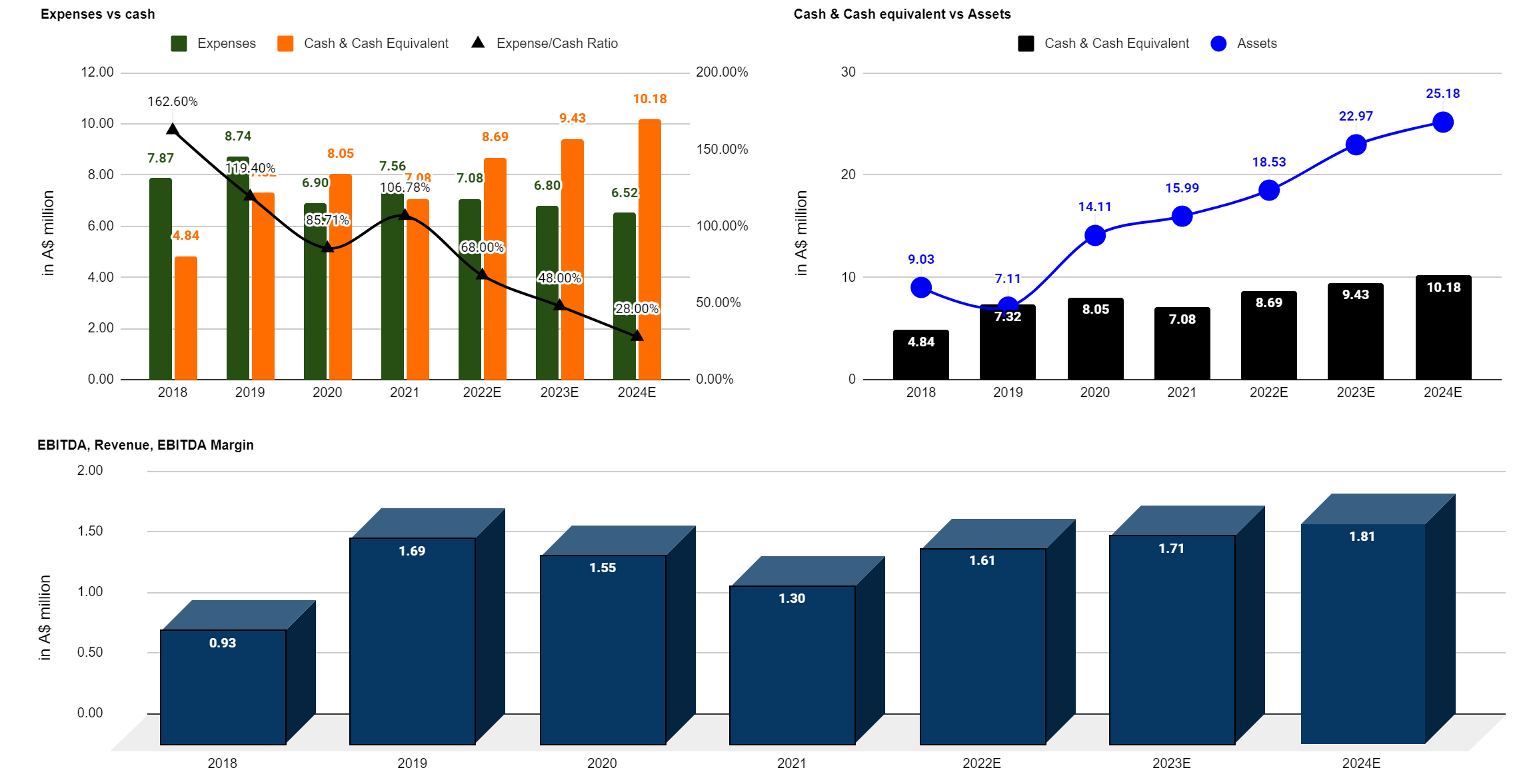 One of the strengths of the company is the scalability of its business. Hence, this is reflected by stable operating expenses which are expected to remain flat below $7 million onward FY22. Furthermore, we have forecasted the expense to cash ratio to decline to just 28% by FY24 from 106% (FY21). In other words, the company has a comfortable cash position. This proves that FGR is very capable to scale up its business. At the current cash burn rate, we believe the company may not necessarily require raising any additional funds for the next five years.

FGR plans to lead the lowest-cost quartile of the global graphene suppliers. We are convinced that the company will be able to dominate the graphene market by FY25. FGR holds supplies of high-grade graphite and has the manufacturing capability to convert it into the highest-quality graphene. And that with production in bulk quantities at the lowest cost. FGR is actively working toward the commercialisation of its products by developing applications in various fields such as energy storage devices, coatings, and polymers. FGR’s aim is to implement vertical integration in the value chain of graphene production. We also like the fact that the company has a very clear strategic roadmap in place. With a graphene market expanding at a CAGR of ~38% for the next five years, and a consistent operating capability, we believe that FGR could achieve operating breakeven levels before FY25. Therefore, we recommend long-term investors to “Buy”.