The outlook on gold price is positive going forward. The company has scaled up its production target for the next three years in order to capture a greater market share from its competitors. We believe that the company can deliver on its plans.

Evolution Mining Limited (EVN) is a gold mining company focusing on mining and exploration operations in Australia. It owns and operates five gold and silver mines in Queensland and Western Australia. The company has recently acquired a new gold mine in Ontario, Canada.

The stock recovered from the March slump quickly as demand for Gold increased as it does in every financial crisis. EVN also posted positive financial performances for FY20 – giving it a boost. The share price however, is fairly volatile of late due to the mixed bag of news and investor moods that is coming its way with pause and resumption of operations. 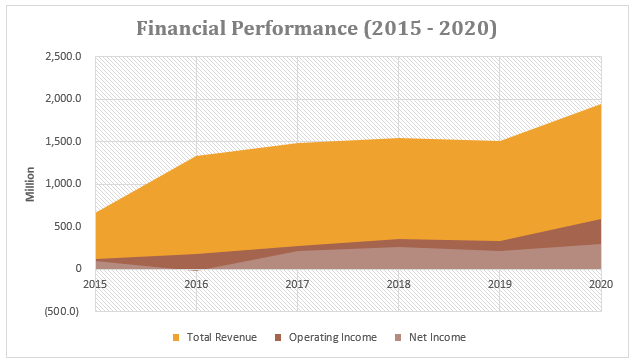 Total quantity of gold sold came in at 764,655 ounces out of which 664,655 ounces were sold at an average spot price of $2,320 per ounce. Mine operating costs increased by 1.2% compared to that in FY 2019. This was driven by a general increase in labour rates of approximately 4%, a full year of operations at Cowal and commencement of the underground mine at Mt Carlton. These were mostly offset by lower costs of power, diesel, and consumables.

Red lake operating costs were $48.3 million for the first year while that at Cracow increased by 3% year over year. Inventory costs expensed were $48.6 million higher due to planned utilization of ore stockpiles at Cowal, Mt. Rawdon and Mt. Carlton. Royalties were higher by $9.8 million due to higher price of gold.

Operating cash flow from mines increased by 45% year over year to $1,121.4 million. Total capital investment was $371 million consisting of sustaining capital of $83.4 million and expansion capital of $287.6 million.

The total capital expenditure for the year ended 30 June 2020 was $82.8 million with an exploration expense of $23.7 million.

The Group acquired the Red Lake gold mine in Ontario, Canada for US$375 million and a contingent component of US$ 20 million for each one million ounce of gold resource inventory added up to a maximum of five million ounces, outside of the agreed resource baseline. Red Lake is a high-grade, long-life, underground gold mine located in one of Canada’s most prolific gold districts.

The Group completed the divestment of the Cracow Gold Mine in Queensland on 1st July 2020 to Aeris Resources Limited for a total consideration of $125 million.

Investment in sustaining capital in FY2021 is forecast to be between $112.5 million-$137.5 million. Red Lake accounts for a significant amount of Group sustaining capital as the company invests in transforming the operation with key items including replacement of mobile fleet, shaft decommissioning, resource definition and major maintenance and upgrades.

Major capital in FY2021 is expected to range between $260 million –$290 million. A large proportion of the major capital is associated with expansion projects at Cowal as the operation invests in projects to augment production to over 300,000 ounces per annum.

Production is planned to increase to over 800,000 ounces during the three-year period to FY2023. Growth is expected to be driven by the initiation of the Cowal underground mine in late FY2022 and execution of the Red Lake transformation plan.

Investment in two significant projects at Cowal and Red Lake will materially increase production and transform the quality of the company’s asset portfolio.

Major capital investment at Cowal is expected to increase production to above 300,000 ounces per annum. Red Lake will continue to invest in mine development aimed at augmenting annual production to over 200,000 ounces.

We recommend a Hold on Evolution Mining for investors already holding and for new investors looking to gain exposure into the stock we would recommend to “buy” on a pullback which will be updated in our reports.