A firm with a high quality asset. High dividends and growth are expected in the future. A "buy" from us.

Deterra Royalties Limited (ASX: DRR) listed on the ASX on the 23rd of October 2020 after its demerger from Iluka Resources (ASX: ILU) and is now Australia’s largest public company that deals purely with mining royalties. Post the demerger, Iluka holds 20% interest in Deterra as a long-term interest.

Deterra’s business model is simple. They play project finance and help fund mining projects and in return, they receive a royalty from the revenue the mining company generates on selling the resource that was mined in the said project. This essential means that Deterra is an investment vehicle for investors that want exposure to the resources sector. Investing in a royalty mining firm over the mining company has its advantages – it limits the downside risk exposure to the commodity markets. Other risks that would be mitigated are development and operating cost increases since a royalty firm is not the miner of the commodity.

The royalty mining business has quite a lot of players in North America and Europe. Deterra Royalties are the first such business to be traded on the ASX. 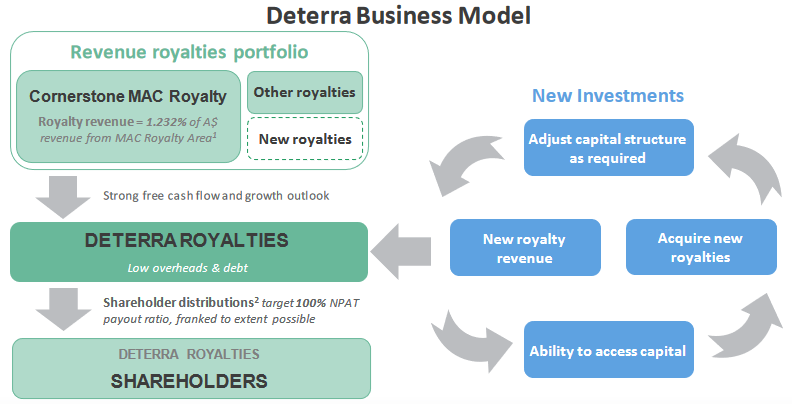 Currently, Deterra has one major source for royalty revenue – The MAC Royalty that is operated by BHP. Deterra strategy for the future is straightforward as well. They will focus on getting their hands-on assets that will give them more royalties in the future. It’s important to note here that mining projects come with a mine life and hence, the royalty payments last as long as the mining company can operate the mine.

The business model of royalties is associated with very high margins as overhead costs are very low. The royalties that are received are dependent on the price of the commodity that is being mined. High iron-ore prices will mean Deterra’s royalties from BHP will be high.

Mining Area C or MAC is a part of BHP’s iron ore operations in Western Australia. The asset life is longer than 30 years and is operated by the largest diversified mining company in the world. The high-grade iron ore that is found here is thus a low-cost asset that has the potential to expand with more debt investment in the future.

The current revenue payment is 1.232% of the revenues that are generated from the MAC Royalty Area. In 2019, the revenue generated from the MAC Royalty was $85.1 million. The sales volume was 55 million dry metric tonnes. The production capacity is a whopping 139 million dry metric tonnes per annum once the South Flank expansion is completed, which is estimated to be in 2023.

Deterra does not have to contribute towards operations or capital for the project. The 30+ year mine life at a huge production capacity will generate sustainable free cash flow for Deterra.

The picture below shows the production forecast for the MAC Royalty area. 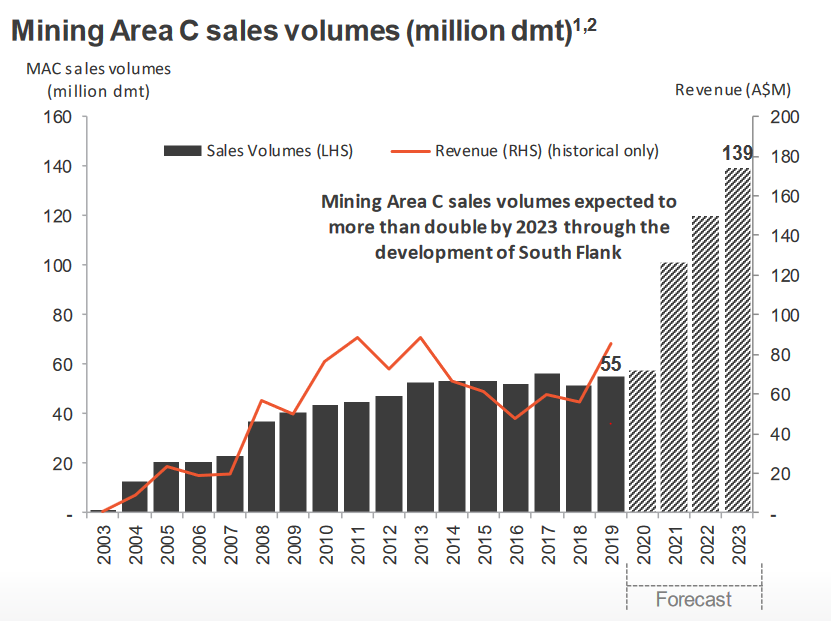 One of the biggest attractions of a royalty firm is the dividend payout. Deterra is committed to payout out its entire net profits as dividend to its shareholders. Iron ore prices will determine the extent of its earnings. Foreign exchange rates between USD and AUD will play a role as well.

The royalty business model aims to grow the business by handling multiple projects and deriving royalty revenues from each of them. Capital allocation thus becomes one of the most difficult tasks for the management. Deterra’s management has significant experience in the global resources sector.

The outlook from the MAC operations is positive and looks to be very lucrative for Deterra. The production forecasts are set to double by 2022 and all of the profits that will be earned will be passed on as dividends to shareholders. The royalty business as a whole will see growth in the coming years and any organic growth that Deterra will increase its profits with a lot less risk than the miner itself.

Since its debut, DRR dropped from 4.95 to 3.90 and recovered to 4.60 before consolidating around 4.30. The Relative Strength Index is very supportive indicated by a divergence. The current 38.2 Fibonacci level acts as an immediate obstacle to further upside. A previous resistance turned support at 4.15 may be retested. At this price range, buyers might be interested in participating to the rebound which we believe is a fair price for a speculative buy as attested by a surge in volume around that key level. We recommend entering position progressively from this area. 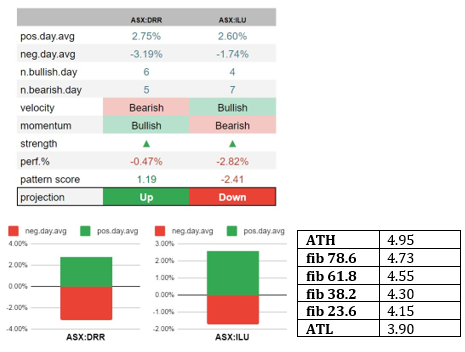 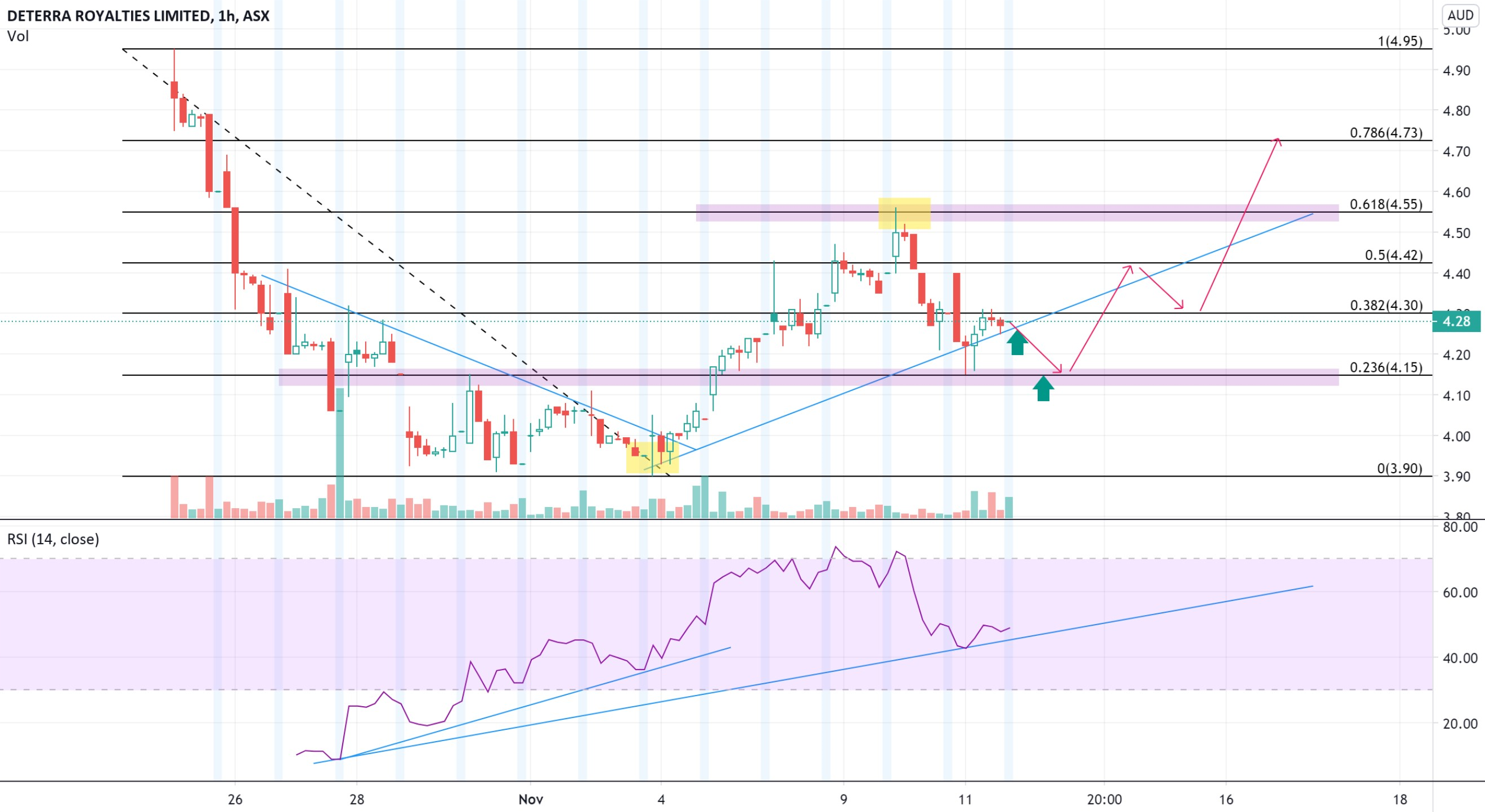 Deterra listed just last month. It has an asset of very high quality on its balance sheet and its operations are being run by arguably the best in the mining sector – BHP. The technical show that this is a good time to enter a position. The forecasts are high and there is also potential for growth. We issue a “Buy” recommendation for the stock for long-term investors.