BRN Akida shows promising signs early on. The stock is trading in the middle of its 52-week range. With strong financial health and consistent advancements, we hold out a “Buy” recommendation to investors looking at a long-term growth investment.

BrainChip Holdings Ltd (BRN) develops technologically advanced solutions for artificial intelligence and machine learning applications at the Edge in the form of software and hardware. Their product – “Akida” essentially takes the way our brain operates and delivers it on silicon in a digital format. Hence, processing data the same way our brain does. The Akida chip is an industry defining low powered spike-based AI processor.

These products are designed and used in the development of systems for Edge AI. They are exceptionally low-powered and offer completely integrated solutions for Edge AI systems.

BrainChip is competing with some of the biggest and most recognizable blue-chip companies in the machine learning and artificial intelligence space in the world – namely, Google, Nvidia, Intel, IBM, and Tesla. These competitors are operating in quite a few business verticals. However, BrainChip differentiates from all these companies as the only publicly traded pureplay AI Company in the world.

BrainChip’s “Akida” also differentiates itself from the competition by being an industry defining high-performance, small, ultra-low power consumption neural processor that enables a wide range of capabilities.

BrainChip reported a huge drop in revenue at the end of 2019, raising questions about its product. However, BrainChip seems to have finally nailed down on the performance of their product. This inference is backed up by the company signing fresh contracts for early access programs in 2020. BRN has entered a joint agreement with Valeo Corporation, LDA Capital has entered into an Equity Draw Agreement with BrainChip, suggesting that the firm will now be able to raise more equity capital and avoid further debt financing. BrainChip’s latest announcement involved partnering with Magik Eye to market a 3D vision solution. These deals and contracts have caused quite a surge – a 247% increase in share price in the last 3 months.

BrainChip’s appointment of Prof. Marshall – a Nobel Prize laureate in Physiology and Medicine to their scientific advisory board. The appointment comes with hopes to provide insight on the possible use case of their chip in the Smart Health sector.

BRN has recently seen a surge and a slump. The firm has entered into an agreement with Vorago Technologies for early access to its chip – Akida. Vorago is supporting a Phase 1 Nasa program and it has caused quite a surge in the stock price as investors jumped in on the chance of buying the stock in its early days. This surge also means that BRN has gained a “Unicorn” status, i.e., a billion-dollar valuation.

The most recent update from BRN coming through was on the 14th of September 2020, when the firm announced the validation of their Akida chip. BRN’s early access customers will now be provided with these engineering samples. This enables Brainchip to now focus on software improvements for Akida

The company returned a decline in revenue growth of 92% in 2019. However, the earnings before interest and taxes remained unchanged. This was a massive indicator to its investors that the only problem it had to fix was the product. The capital structure of BRN is a healthy sign for a firm that is in its early revenue stages. The firm has a 92% equity capitalisation, and about 8% debt.

BrainChip’s business model can be seen as strong due to the low levels of debt and readily available risky capital courtesy of its current investors and new deals. The firm has enough cash in the bank to meet any short- or long-term debt obligations that it holds, indicating that it is in no reason for the firm to go out of business. Rather, indicating that it is on course to finally be profitable by late 2022. 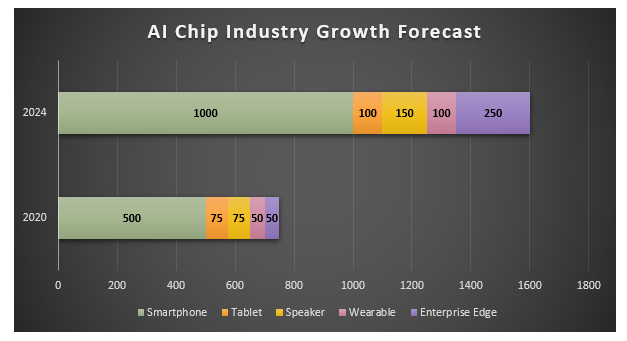 Considering the new deals already entered and Akita’s engineering samples due to be available in Q3 2020, revenues are fully expected to bounce back to pre-2019 levels. The Edge AI chip industry is growing at a rate of 25% year-on-year. This coupled with BrainChip’s competitive advantage, it is believed that the company will continue to increase growth by a CAGR of 35% from 2021 onwards. Earnings in the Edge AI industry come with low margins due to the high costs involved in the making of the silicon chips. BrainChip has also ensured that it is cutting costs in light of Covid19. Margins are predicted to remain negative due to the high R&D and PPE costs involved. However, we expect the margins to stabilize as their production line operates at increasing capacity in the years to come with cost of production decreasing due to high volumes and lower bill of products in the industry. 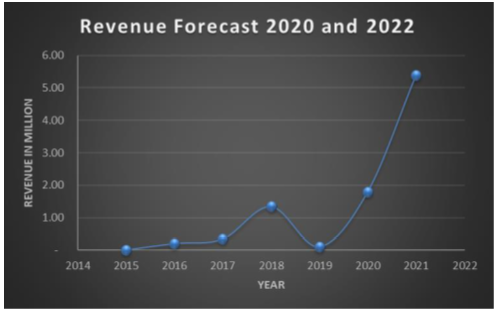 BrainChip has positioned itself perfectly today in relation to the industry. With strong financial health and access to capital already secured, the firm’s business model can now drive growth in revenues as product advancements have been positive. While we do expect swings in the short term, the stock tumbled even with a positive announcement. However, the stock is trading in the middle of its 52-week range, and we give it a “Buy” recommendation for investors wanting exposure to BRN’s bright future.