We reiterate our “buy” for BKT as we see material upside potential in the share price.

Black Rock Mining (ASX: BKT) is an Australian-based company with a 100% interest in the Mahenge Graphite Project located in Tanzania. The Project has a JORC compliant Mineral Resource Estimate of 213 million tonnes at 7.8% of Total Graphitic Carbon Content or TGC. Black Rock also has Ore Reserves of 70.5 million tonnes at 8.5% TGC. The Ore Reserves support a mine life of up to 340 thousand tonnes of Graphite per annum for a reserve life of 16 years.

We first recommended BKT at $0.225 a share back in March 2022. The stock performed well until the broad market volatility began affecting it. Now, as BKT has pulled back, we believe it is a good time to gain or increase exposure to BKT. We are convinced that BKT will play a critical role in the production of graphite necessary for the development of batteries which are critical to support the tremendous growth in the global Electric Vehicles sales. 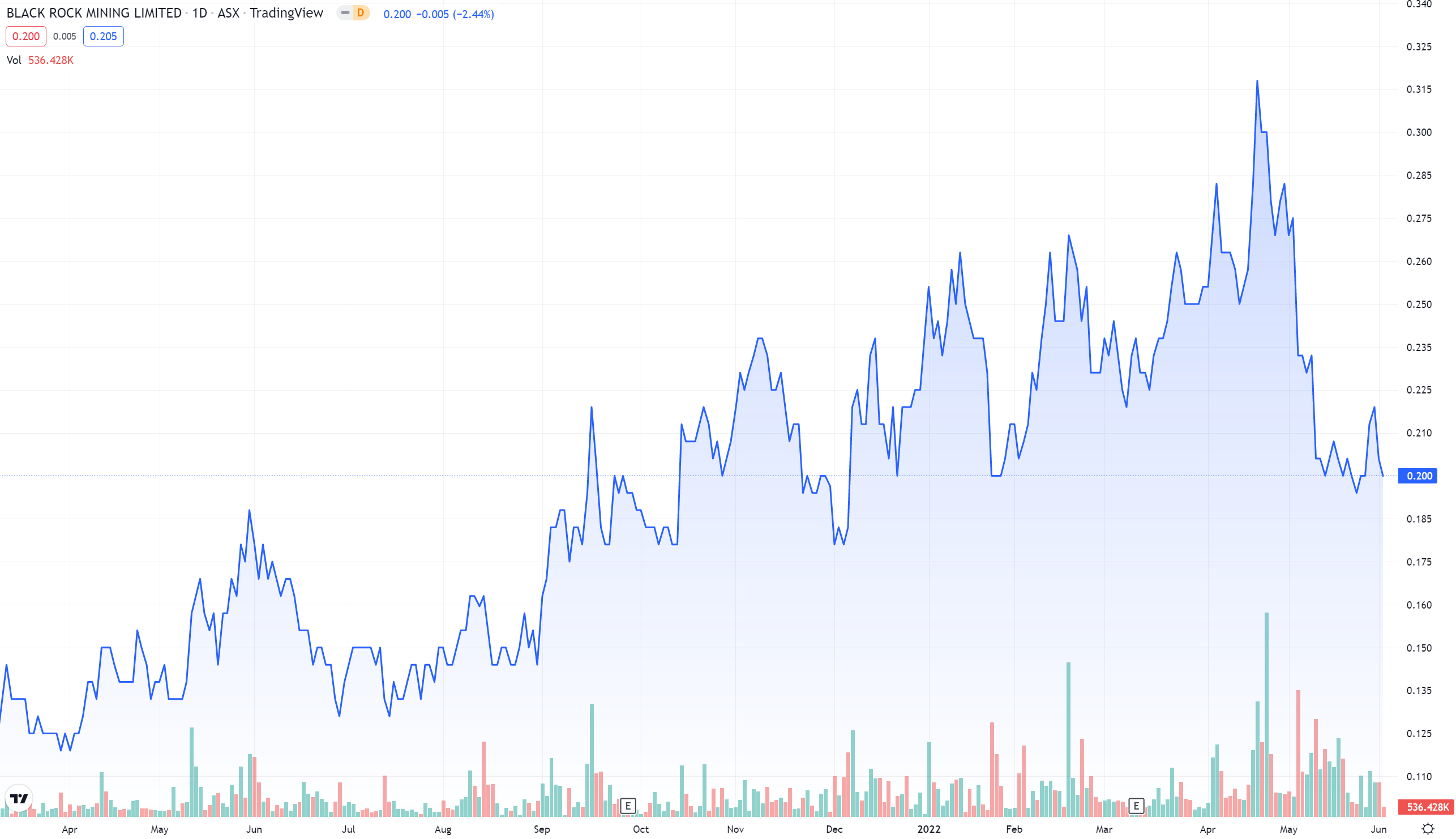 Why Black Rock Mining is different from other battery minerals producer

The way Black Rock differentiates itself from its peers can be summarised in four key points:

Black Rock Mining (ASX: BKT) has a 100% interest in the Mahenge Graphite Mine located in Tanzania. The Project has a JORC compliant Mineral Resource Estimate of 213 million tonnes at 7.8% of Total Graphite Content (TGC). It also has Ore Reserves of 70 million tonnes at 8.5% TGC.

Black Rock’s ore reserves support a mine life of up to 350 thousand tonnes of graphite per annum for a reserve life of 16 years.

In October 2018, the Company released a Definitive Feasibility Study (DFS) for the Mahenge Project based on strong customer demand. This was enhanced in July 2019. Black Rock exhibits exceptional financial metrics comprising a low CAPEX with the lowest peak capital expenditure of US$116 million for phase one. The Company also has proved to own a high margin with an AISC margin of 63.1%. Moreover, what we like about BKT’s Mahenge Project is its low technical risk with substantial pilot plant operations that run 110 tonnes and with superior economics of 44.8% IRR and a 10-year NPV of US$1.16 billion.

Black Rock has obtained all Environmental approvals, Mining Licences and its Resettlement Action Plan with clear title to the eDFS project area. In June 2020, the Company announced a Strategic Alliance with POSCO Group to develop the Mahenge Graphite Mine. This included an equity investment of US$7.5 million, signed in February 2021, followed by an offtake agreement with a US$10 million prepayment facility. Black Rock has also allocated planned production through Pricing Framework Agreements with five other offtake customers. In December 2021, Black Rock signed a Framework Agreement with the Government of Tanzania confirming their 16% Free Carried Interest shareholding and commitment to jointly develop the world-class Mahenge Graphite Mine.

Black Rock has recently awarded its Engineering Design contract to a highly experienced design, engineering and construction firm, CPC Engineering. BKT has established an integrated project management team responsible for the Front End Engineering and Design (FEED) process. The Company is progressing rapidly in its detailed engineering, particularly on earthworks, as Black Rock’s initial priority is to ensure that the Company can be construction ready in the coming months.

As Global demand for graphite continues to grow, with positive market tailwinds, we believe Black Rock could be ready on time to seize this exceptional opportunity to become a major graphite producer in the clean energy supply chain. The current graphite prices are approaching the prices used in the eDFS for the Mahenge Project.

We have seen Black Rock continuing to expand its project delivery, and operations teams largely focused on in-country roles that will ultimately deliver the Mahenge Graphite Mine into production. We are also pleased to witness that tender from other critical contracts has commenced, including Mining Services, Earthworks, and Concrete works packages.

As part of the Company’s ramp up on project execution activities, Black Rock has completed an update of its Mahenge Mineral Resource. This update provides high confidence to customers and financiers on the planned production output over the first 10 years of operation from the Ulanzi open pit. Drilling and bulk sampling were completed on the Ulanzi orebody in 2019 but held in storage for final customer qualification. This material was recently assayed and used as an ore feed and processed in China and Canada as part of Black Rock’s 500-tonne qualification processing plant campaign.

The 25% increase in measured mineral resources confirms that 100% of the likely loan life is now underpinned by Measured Resources.

Why do we continue to like Black Rock Mining?

As we stated in our previous report, there are many Graphite deposits globally, and relatively few of them successfully transition into production, particularly outside of China. We have been following a few ASX-listed graphite players, and many of them have simply given up and, in many cases, turned to gold projects.

Graphite is an opaque and complex market. However, we believe the following criteria could define what a good Graphite Project should have, and Black Rock definitely has the all the traits of a successful project:

Furthermore, Black Rock is securing its offtake agreement with POSCO, with potentially more than 47% of its product for Module One under binding offtake with a credible ex-China blue-chip player. While Black Rock’s larger flake products could potentially attract much higher pricing, these larger flake markets are even more opaque than the fines markets, particularly due to the volumes of products in each market that changes hands.

We are pleased to see that Black Rock remains well-funded. Black Rock does not have only the attribute of a solid Graphite Mining Project. The Company has also managed to have a solid balance sheet with a low-debt capital structure that allows it to flexibly finance its development. The Company has recently completed a series of capital raising campaigns. Black Rock has achieved $3.65 million in capital raising via a placement, entitlement offer, and POSCO’s ongoing equity investment. More recently, on the 6th of May, Black Rock completed its $25 million Placement to Institutional and Sophisticated Investors. About 104 million ordinary shares have been issued under the Company’s placement capacity. The Placement shares are similar to the Company’s existing fully paid ordinary shares. Black Rock’s shares were issued on the 16th of May 2022 for 24 cents apiece, representing a 12.7% discount to the last closing price of BKT shares on the 3rd of May 2022 of 27.5 cents per share and a 13.8% discount to the 5-day volume-weighted average (VWAP) of 27.8 cents per share.

Thus, the Company is well-positioned, heading into 2HFY22, with $6.8 million in cash at the bank on the 31st of March. With the additional funding of $25 million from the recent share placement programme, Black Rock has approximately $30 million in cash and cash equivalent. 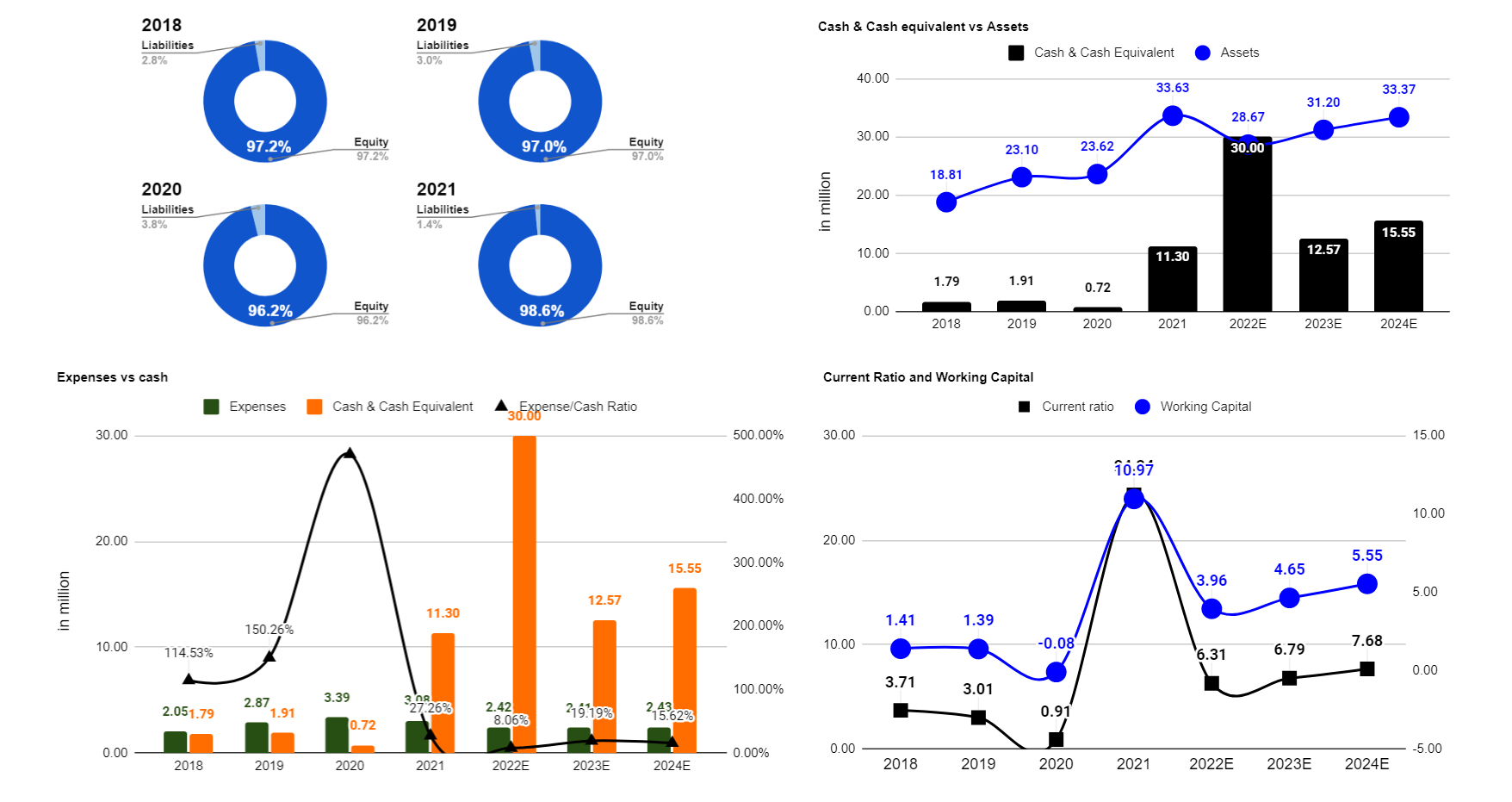 We forecast the working capital to remain steady above $3.96 million and reach $5.55 million annually by FY24. Black Rock also maintained its conservative view on operating expenditure during the year, the Company has shown exemplary discipline in managing its cash-burn rate, and we expect BKT’s Expense/Cash ratio to remain below 16% in the next three-year period.

Also, Black Rock made significant progress on its debt financing activities during the quarter, with Independent Expert site visits completed and reporting underway. Black Rock targets 50% to-60% debt via traditional project finance, aiming to finalise over the next few months. Major construction activities are expected to begin in the third quarter of this calendar year and based on a 15-month construction period, the Company is targeting the first production from Module One in the fourth quarter of CY23.

Black Rock’s direct ASX competitors include Blackearth Minerals (ASX: BEM), Evolution Energy Minerals (ASX: EV1), and Walkabout Resources (ASX: WKT), who are also developing graphite projects in the southeast part of Africa. Among these competitors, over the last twelve months, BKT’s shares have consistently outperformed its peers, gaining more than 17% compared to WKT, BEM, and EV1, which returned 13.16% -20.87%, and -38.7%, respectively.

Our earlier report on Black Rock Mining can be viewed by clicking here.

We expect the demand for flake graphite to increase substantially this decade, with an estimated CAGR of 14% to 16%, led by the surge in demand for the development of batteries. By FY26, we expect batteries to become the largest market for graphite, and by the next decade, battery applications will account for 55% of the world’s graphite demand. In recent years, the use of natural graphite in batteries has been growing and is expected to surpass synthetic graphite in 2025. We also think graphite has been neglected in the race to secure critical raw materials for battery manufacturing. Furthermore, there is a lengthy qualification process to ensure that new graphite projects can meet the quality required for the development of battery anode. This is a significant barrier to entry which will further tighten the graphite supply chain and lead to a deficit by the end of 2022.

We like Black Rock because the Company has proved capable of scaling and extracting quality graphite. More importantly, the Company is well ahead of its peers with its binding offtakes for up to 90% of its initial production phase. And finally, Black Rock has secured a commitment with POSCO, which agreed to buy 100% of its fines products for use in anode battery technology is an important tick of approval that should be considered.

We reiterate our “Buy” recommendation for BKT as we see material upside potential in the share price with the company’s Mahenge Graphite Project now financed and the initial production scheduled for CY23.