ABB has been gaining market share off Telstra in the nbn space. They have had a positive earnings report and we recommend members to "Watch" given the high price.

Aussie Broadband (ASX: ABB) is a new player on the ASX having listed late last year, however, they have been around in the telecom sector providing nbn internet to homes and businesses for over a decade. Excellent customer support is what sets Aussie Broadband apart from Telstra, TPG, and Optus of Australia. They have been consistently gaining market share and are now the 5th largest nbn provider Down Under – having over 300,000 business and residential users. In addition to broadband services, ABB has expanded into VOIP, mobile plans, and most recently, home entertainment by partnering with Fetch TV.

The above chart shows the segmented revenues and EBITDA that ABB earned in FY2020. Most of the growth has come from the residential segment for ABB, however, the costs associated in the residential segment are high when compared to the business segment. In a business account, the usage of the internet is far greater and hence, ABB will generate higher margins in its operation. This can be seen how skewed its earnings are towards the business segment.

Aussie Broadband listed on the ASX in October 2020. They raised $40 million in an oversubscribed offer from institutional investors and also offered shares to their customers, for which there was very strong support. This demonstrates that Aussie Broadband’s customers are very happy with the service that is being provided by the firm.

The $40 million funds coming in were offered at $1 a share at an initial market capitalisation of $190.3 million. The share price peaked at $2.2 a share – making it one of the best performing IPOs on the ASX in the year 2020. The funds raised from the IPO are being used for:

The allocation to infrastructure development is estimated to be in the range of $20 million to $26.5 million. Aussie Broadband in intent on having their own fibre optic cables in the ground. Of course, this is arguably one of the most critical steps that the business has to take in order to grow themselves as a business and a brand and compete with the bigger players in the market. In-house infrastructure has benefits such as: 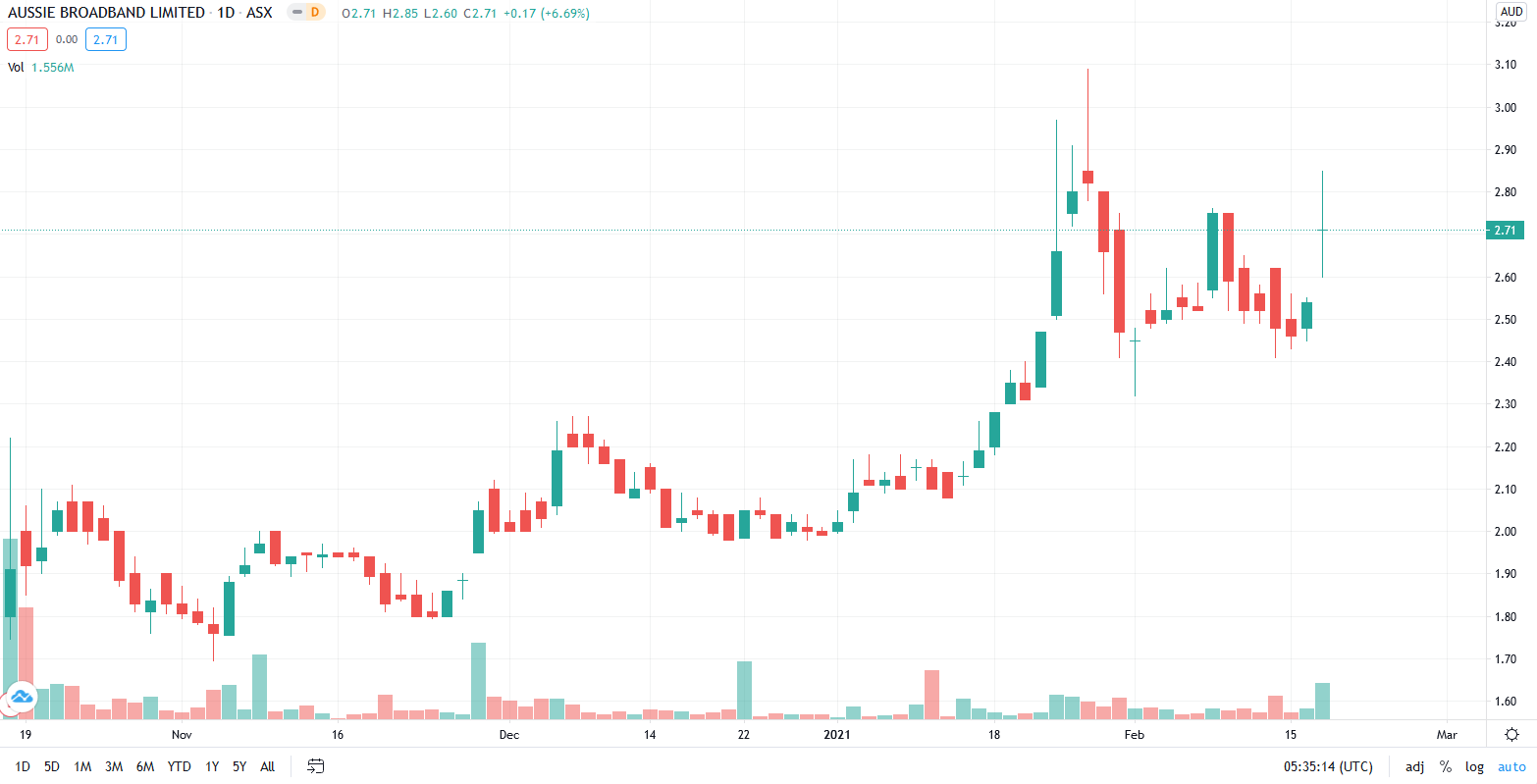 As for the share price performance, ABB shares have gained over 40% since the IPO and 36.64% since the beginning of 2021. It has outperformed the ASX-200 index during this time. However, given how early it is since it began trading, any comparisons to performances should be taken in with a grain of salt.

Aussie Broadband’s management team comes with a lot of experience. Phillip Britt, Managing Director and Co-founder brings 24 years of experience in the telco industry on to the table. He is also the receiver of the highest honour presented by Communications Alliance as he was named ACOMMS Communications Ambassador of the year in 2020.

Adrian Fitzpatrick, Chairman and Non-Executive Director brings 30 years of experience across operations, financial management and strategy to Aussie Broadband. He is previously one of the co-founders of Pitcher Partners. Hence, the situation as far as management is concerned looks to be very promising for ABB. There is lots of experience and a diverse skill set that has been at works since the early stages of the company all the way to ABB competing with the telco heavyweights to gain market share.

The Australian internet service provider industry has grown by 4.2% CAGR over the past years. The industry has generated $5.6 billion in revenue to all the players in this space. The profit margins, however, is slim given that there is a constant need to develop infrastructure and invest in newer technologies. This has resulted in about $870 million in profit annually for the whole industry.

The Covid19 pandemic has increased the demand for high quality and high-speed internet at household levels. People are stuck at home and they need high-speed internet for their work and also to consume more content as consumer behaviours have changed. According to data, network demand increased by 25% in Australia. NBN Co announced a $150 million support for the internet service providers.

The revenue that is generated and the profit margins associated with each new customer or connection depends on the total bandwidth that is being consumed by that customer. As these numbers go up due to increased demand at a time when people are struck at home, companies have benefitted. While the high bandwidth demand is not sustainable in the long-term, we do believe that the normalised demand going forward will be significantly higher than the normalised demand that existed prior to the pandemic.

Aussie Broadband’s revenues have been growing at an average of 90% over the past 3 years. In FY2020, revenues grew by 87% to $190 million. Their expenses, however, are large given that they are such an early-stage firm compared to the rest of the players in the ISP industry. In FY2020,

These are the main expenses that affect the growth and operations of ABB. The firm reported an EBITDA of $1.5 million and a $5 million loss for the financial year.

According to the latest update from Aussie Broadband, revenues have already grown by 31% in the 6 months of FY2021. As of 31st December 2020, the unaudited management account expects $342 million in revenue. EBITDA is estimated to be in the range of $6.9 million to $7.4 million. However, with the IPO costing the firm close to $8.5 million, the audited statements may look slightly different. 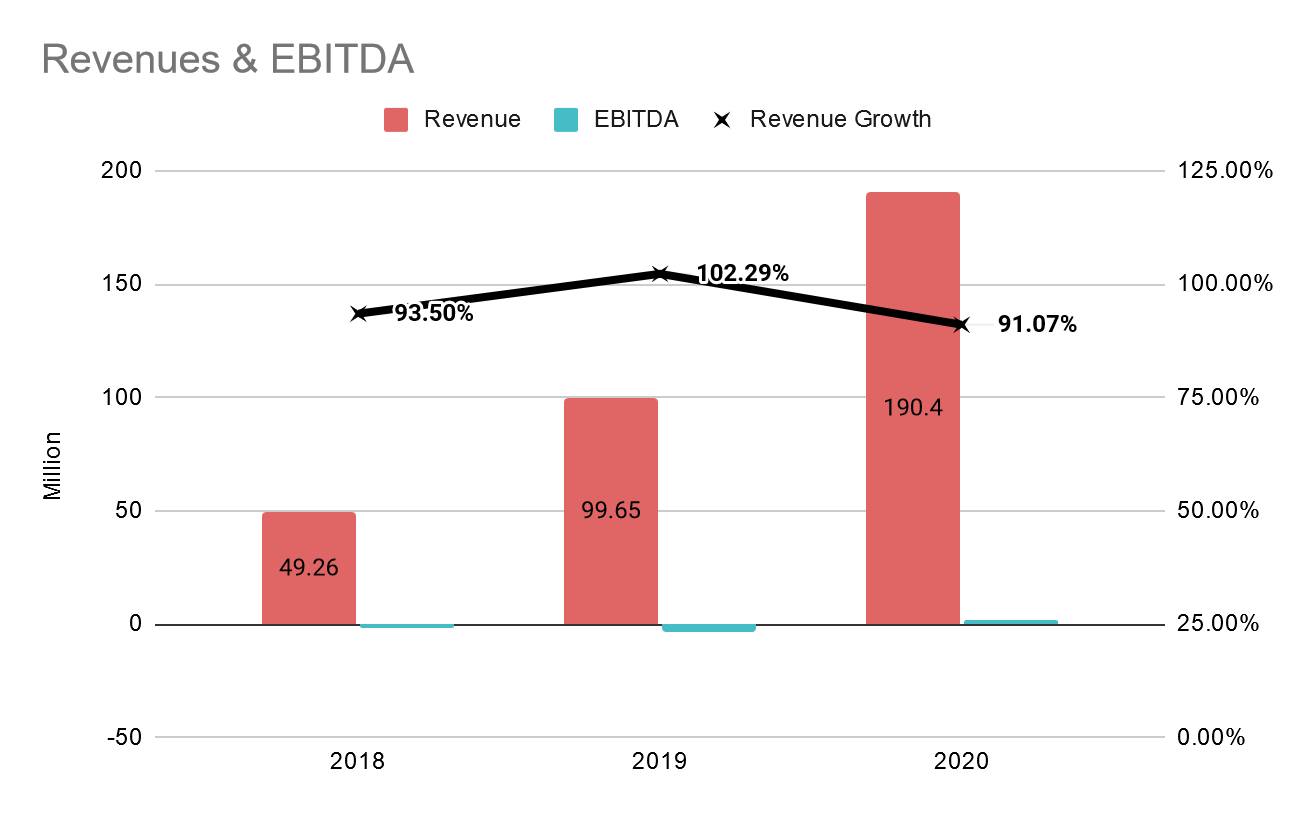 During FY2020, ABB reported that they had 242,565 residential connections, wherein the firm added 150,000 new connections during the financial year. The churn, the metric that illustrates how many customers a firm loses year-on-year has marginally increased, however, it does not raise any red or even yellow flags. The current churn in residential customers is a low 1.76%.

Looking at the balance sheet, ABB had $21 million in cash at the end of FY2020. The offer will have added significant funds to ABB. The expectation is that they will be net cash positive with $31 million. The firm was reported to have $38 million of debt on its balance sheet. However, since the IPO, we would have to wait and see just how strong ABB’s balance sheet now looks.

Aussie Broadband is in a high-growth phase for a few years now. We expect it to continue growing at high numbers, however the numbers will reduce over time. As they gain more market share, ABB will find it harder to further penetrate into the market. In the market for nbn, it is not just ABB that has been growing consistently and taking advantage of the slip-ups from Telstra. This is likely going to be very contested as TPG, Optus and Vodafone have shown that they can consistently show greater market share and they are also investing heavily in infrastructure.

The half year earnings were very positive for Aussie Broadband. The forecasts in the prospectus at the time of listing were achieved, and hence, the announcement was in line with expectations.

The full year guidance for ABB has been upgraded based on the positive result at a time when people were at home and consuming more internet.

Revenue guidance for FY2021 is in the range of $345 million – $355 million. Normalised EBITDA (excluding the costs of the IPO) to be in the range of $13 million – $15 million. Residential broadband connections have been growing rapidly, and the guidance puts it between 380,000 – 410,000. The business broadband connection, which is very profitable has not been given any guidance by Aussie Broadband as of yet.

Aussie Broadband has listed on the ASX at the right time in its business cycle. Estimates show that they will be breaking even in FY2021 and begin to generate profits from the following financial year. In order to increase revenue and gain market share, their marketing expenses will be growing as well. There is still a long way to go for ABB to topple the giants and become a very profitable business. They will probably need to raise money again if they are to continue improving their infrastructure in the future. On the back of a positive earnings report, we issue a “Watch” recommendation for Aussie Broadband as the share price looks like it has gotten ahead of itself.