ABR has performed well in the past year and they have an imminent listing coming up on the Nasdaq. There is still upside potential as the firm is expected to begin production in 2021. We recommend investors to continue to "Hold" their positions.

American Pacific Borates (ASX: ABR) has been recommended twice by us – at 78 cents and 99 cents. At market close today, ABR trades at $1.94 a share – returning 148% to our members. It has been a part of our portfolio since a long time, and the stock has performed magnificently in the past year.

For those of you who missed our previous reports, American Pacific Borates Limited owns a rare and large scale Colemanite deposit in Southern California, USA. Colemanite is a natural source for boron. ABR looks set to become the 3rd largest producer of borates in the world, behind Eti Maden and Rio Tinto. Sulphate of Potash (SOP) is used in the fertilizer industry and another product that ABR will produce. Compass Minerals is the only other SOP producer that is located in the USA. The production capacity of its Fort Cady project will make ABR the second largest producer of SOP in the US. The market for SOP in just California is bigger than the entire market for SOP in Australia. Thus, the potential for revenues from the American market is high. 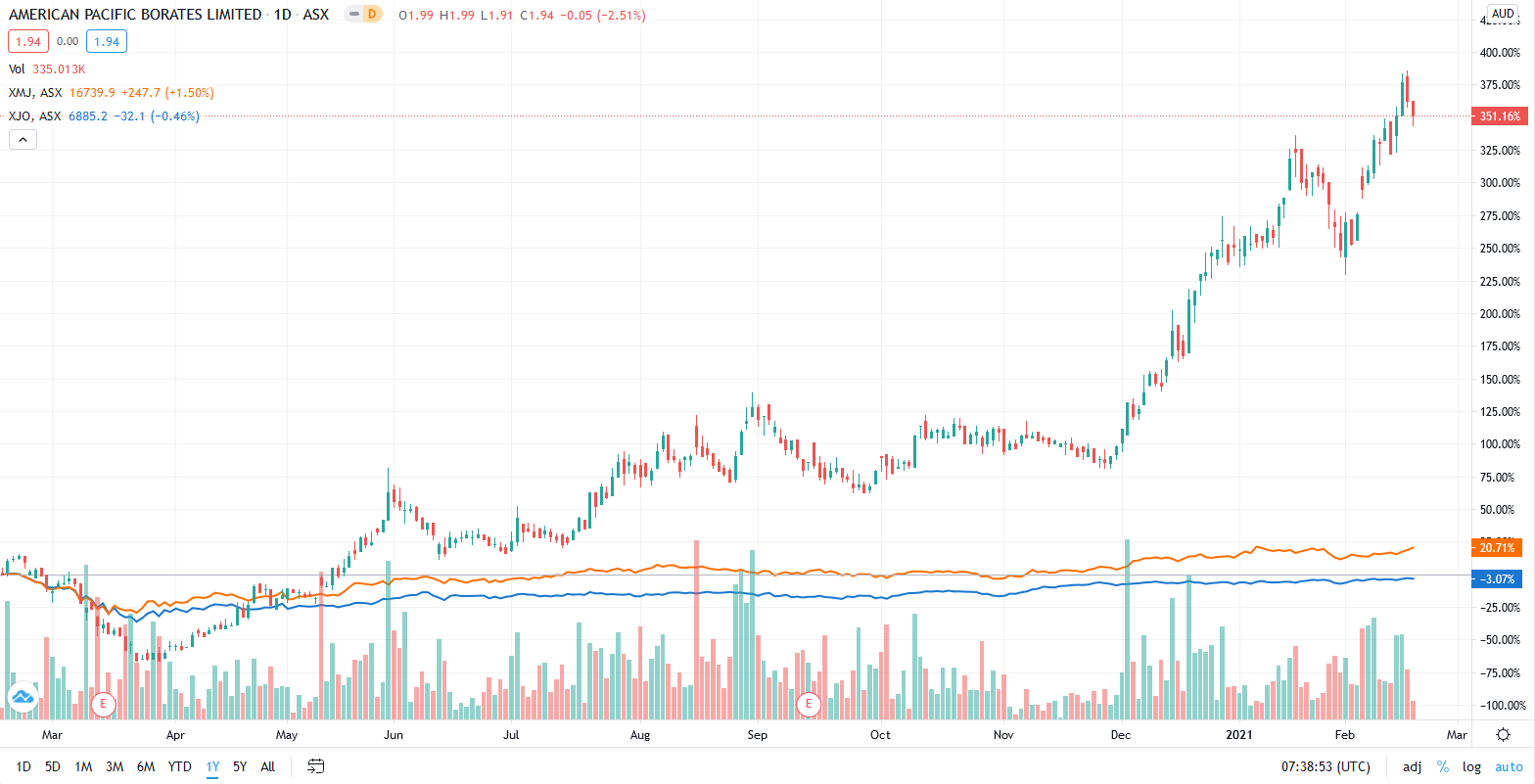 The chart above compares the ABR share price with the ASX 200 index (blue line) and the ASX 200 Materials index (orange line). Since the pandemic hit, the mining and materials sector has been performing very well. Iron ore and copper prices have been soaring and thus outperformed the broader market index. ABR, during this time has outperformed both – the benchmark index and its sector index. Of course, the firm comes with an added element of risk, but the performance speaks for itself.

In June 2020, ABR had announced that they had entered into a binding term sheet to raise US$30 million via a convertible note. The financial instrument came with a share price of $1.75 if the conversion option is taken up. The $30 million convertible was then later renegotiated to 100% equity. ABR initiated a drawdown on the finances and the transaction was to be completed by 31st of January for the sum of $24 million.

The funds are to be used for the construction of the Fort Cady Borate Mine. ABR is still known to be targeting its first production in Q3 of CY2021. At the time of this announcement, ABR had spent over $60 million on the Fort Cady Project. Two DFS studies were completed, with the latest enhancing the financial metrics and production capacity of the project.

ABR announced earlier this month that they have updated the enhanced DFS that was released in April 2020. The SOP production is known to be brought forward. The updated reports show:

The key production targets have remained the same from the earlier DFS. However, the financial metrics were the ones that changed. A new Phase 1C was added. This will enable the decoupling of SOP and boric acid from the previous Phase 1B – delivering a low capex and a higher EBITDA as the SOP production can now be brought forward. 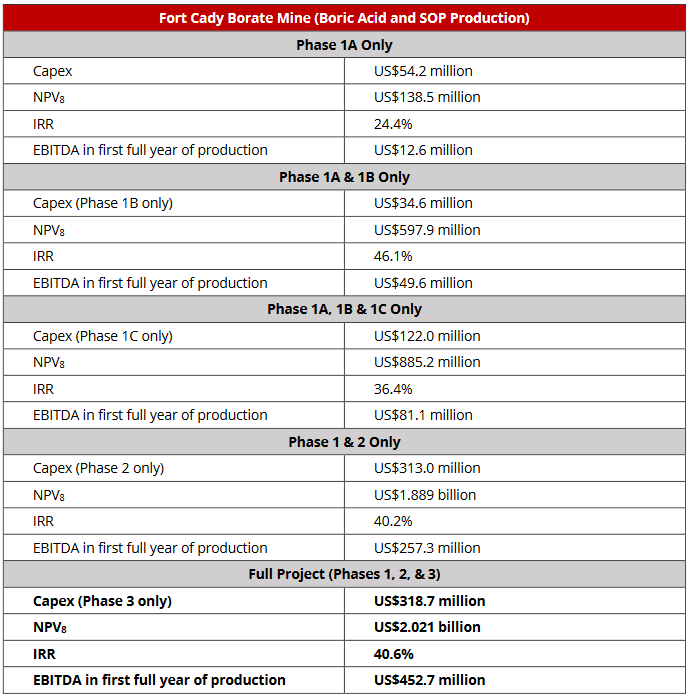 We reported last time that ABR was considering a second listing on the NASDAQ. This is a very proactive and positive move by the firm since an American listing for a firm that operates in the USA can bring the attention of plenty of investors. ABR updated that it has commenced a process to enable the trading of securities on the NASDAQ, however, it will be through an ADR. This goes to show that ABR’s strategy of listing in the USA is mainly for institutional investors, rather than retail investors.

The listing is expected to be completed sometime this month, following a roadshow to institutional investors. The listing in the USA will also come with a lot more scrutiny over the valuations of ABR, in the present and future, given that it is a much more mature market than the ASX.

Matrix Service Company (NSDQ: MTRX) has been appointed by ABR to complete the construction of the Phase 1A of the Fort Cardy Borate Mine. They are one of the top 100 contractors according to experts. The Phase 1A construction is completely funded with $67.3 million cash at the bank as of 31st January 2021. Water and energy infrastructure are not said to be in place and ABR is making good ground to begin production later this year.

All the other metrics and analysis of the Fort Cady Project and ABR remain unchanged from our previous report, and it can be accessed by clicking here.

This is a minor update to ABR. They are going forward as expected. The growth in share price in the past 2 months has been due to the upgraded financial metrics of the Fort Cady Project. A potential price sensitive announcement will be when ABR lists on the NASDAQ later this month via and ADR. Later this year, once production begins, we expect the share price to be sensitive as well. We recommend investors with exposure to “Hold” on to their positions as there is upside still to come.