An ASX heavyweight that has undergone a downgrade but is already on the recovery path. A Buy recommendation for long-term members.

Altium Limited (ASX: ALU) is one of the top technology firms on the ASX. They are a software company that provides electronic design software. These design tools are required and used all over the world by any company that manufactures printed circuit boards (PCB), and these PCBs are used in everything electronic. Given that the USA and China are the largest markets – both in terms of manufacturing and consumption of PCBs and electronic devices, Altium’s revenues are very dependent on them.

A segmented analysis of Altium’s revenues from the latest half year earnings report that was released just today shows the below metrics: 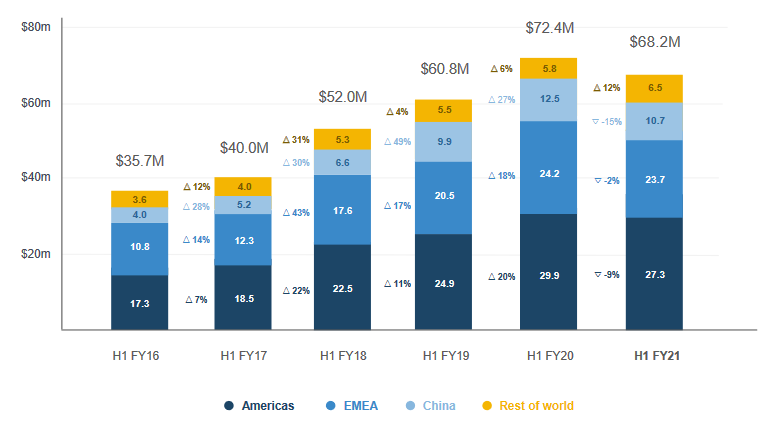 Altium has gone from one of the players in the PCB design software industry to an industry leader. As the largest player in the market, the firm launched its cloud-based offering of Altium 365. Altium 365 is the world’s first digital platform for designing electronics hardware. The product is based on a subscription model and it already has over 9,300 active monthly users. The software is being pushed by Altium to completely move into a SaaS based business model. This is a hard pivot that Altium has undertaken. The pivot has also come with a restructure of the organisational structure. Currently, there are two leadership teams at work and the pivot will go on to transform Altium and the industry – making the firm the one stop shop by creating an ecosystem for all parties involved in PCB design. The FY2025 target that Altium have set themselves is 100,000 subscribers. This should generate $500 million in revenues and Altium is well on its way to achieve this target. The key metrics from the latest earnings report are as below: 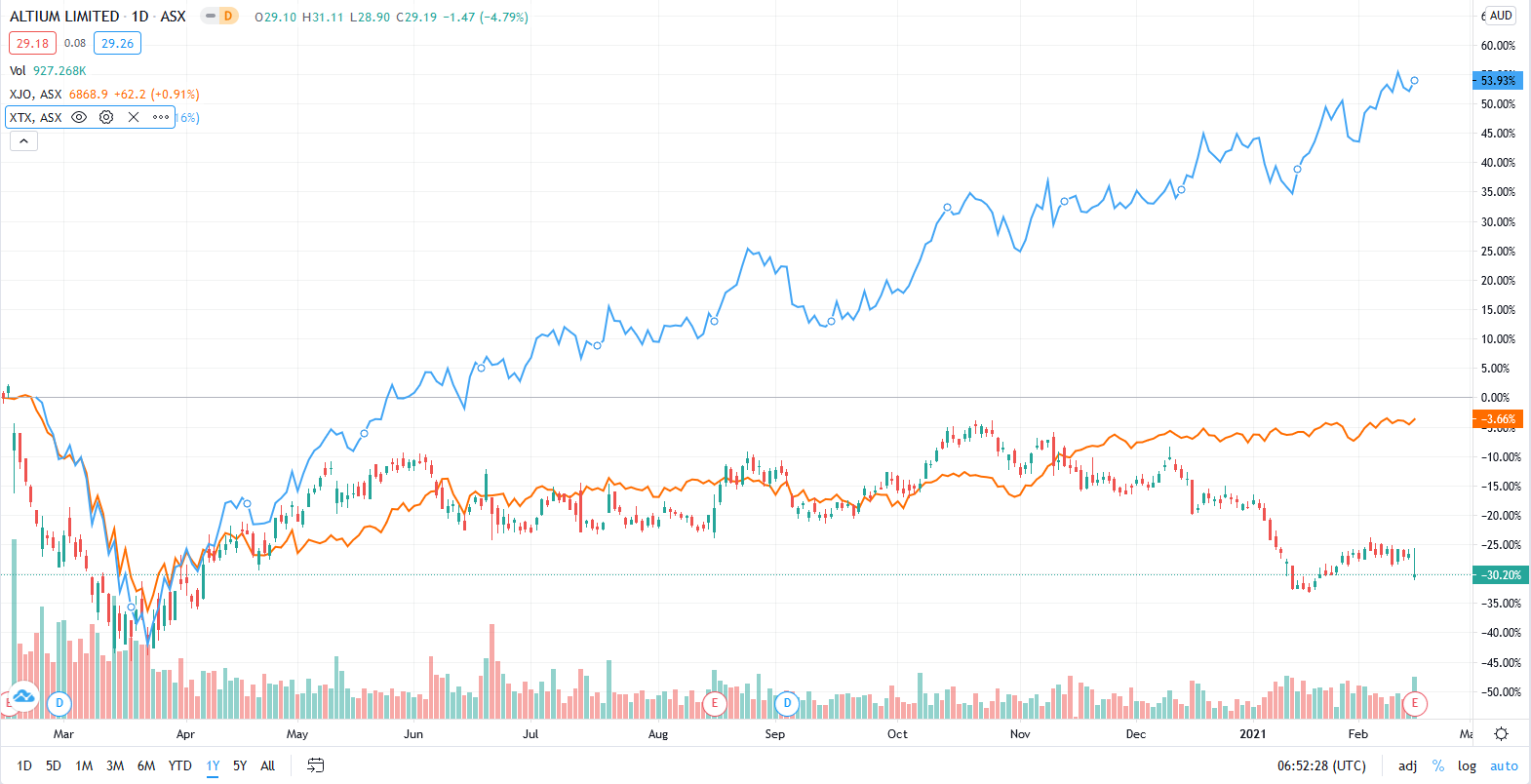 The pivot will be hard for Altium. Covid19 has put the brakes on the growth story of Altium and this has transpired in its share price performance since December 2020. In the above chart, the Altium share price is pitted against the ASX 200 index (orange line) and the ASX All Technology Sector Index (blue line). Altium, after performing very similarly to the ASX-200 since the crash in March 2020, started the downward trend in December as the company revealed that it is expecting a negative performance as most of the customers were affected by the pandemic.

The transformation of Altium into a cloud-based enterprise company comes with a lot of advantages. It will enable a flywheel-based business model and bring network effects into play. We will notice that growth in revenues will be slower than the numbers that Altium investors are used to, however, this is a theme that will be seen in a SaaS based offering. Altium’s revenues in the long run will be very sustainable and they are aiming to make 80% of their revenues recurring.

The world is moving towards a more digital and technology driven economy. PCBs are at the heart of everything electronic and expectations are that its applications are going to increase further. The global PCB industry is forecasted to grow at a compounded annual growth rate of 4.12% during 2020-2025 into a US$ 75 billion market.

Semiconductors which absolutely require PCBs are expected to be the next big product that would define large economies. The battle already looks to have started between the USA and China over semiconductors. The more competition and more internet of things applications we see, the greater will be the need for PCB’s. Innovation and the industry will hence go hand-in-hand, and Altium will benefit as they are the market leader in providing design software.

North America will continue to lead the market when it comes to both – production of PCBs and the consumption. However, China is expected to be the fastest growing market for PCBs, led by the IoT and AI industries. Production and export of Chinese electronics has increased over time and it will continue to increase with all the innovation that is coming from Shenzhen. The private capital required is also free flowing and it is expected to increase once the effects of the pandemic further reduce.

This is where Altium’s shift to a cloud-based product with a vision of creating an ecosystem will be crucial. The strategy will enable Altium to bring together the designers and manufacturers on its product and create a flywheel effect backed by network effects. 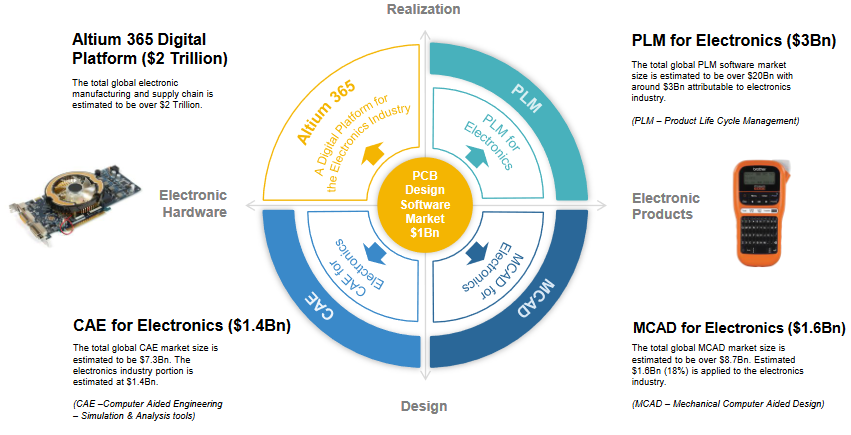 Looking at the latest earnings report announced by Altium this morning, there has been a downgrade due to Altium’s customers being affected by the financial stress caused by Covid19. The below stats are compared to the previous corresponding period, that is, H1 FY2020. 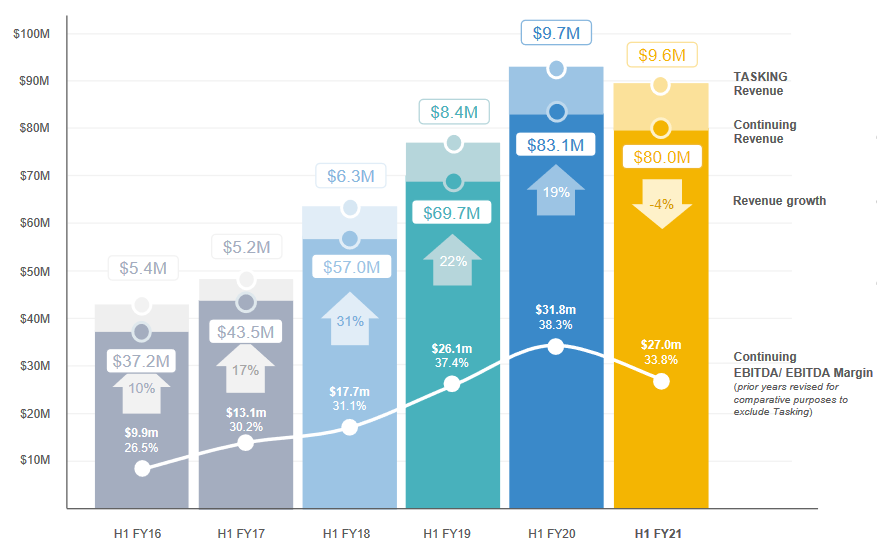 The decrease in revenues have come across all the segments. The USA, China, and Europe were responsible for 10%, 15%, and 4% decrease, respectively. The rest of the world segment however saw a 13% increase in revenues.

$52.2 million or 65.3% of the revenues that was earned during the period is recurring revenues. The decrease in revenues and earnings during the half is due to both – Covid19 conditions affecting Altium’s customers and the pivot into a cloud-based business model that will be challenging initially. Altium offered massive discounts to its customers during the pandemic – resulting in decline in revenues, and it looks like the second wave of the pandemic in Europe and USA have particularly hurt the firm. The decrease in margins is a direct result of the imbalance that will be caused by the decline in revenues. The growth in subscribers during the period ending 31st December 2020 was 12% and since the beginning of the new year, it looks like the active accounts and active users have taken off. These are good early signs for Altium and investors of Altium.

We expect the second half of the year to deliver a stronger performance with a full year revenue guidance of around $195 million with EBITDA margins back to the usual 37% – 39%. Altium is using a high-volume high touch sales model and this is expected to help them realise their 80% recurring revenue target by 2025.

The downgrade in FY2021 is not a reality check in the case of Altium, as is the case with most firms during the pandemic and post pandemic periods. Our estimates suggest that this is a temporary blip for Altium, and we expect the metrics to strengthen from the next financial year onwards. With a challenging macroeconomic environment that needs navigation, especially when the business is exposed to the USA and European markets, the management of Altium is known to be treating FY2021 as a pre-vaccine year and less of a growth year. The stable performance that we expect in the second half of the year will help Altium grow into a much stronger company. 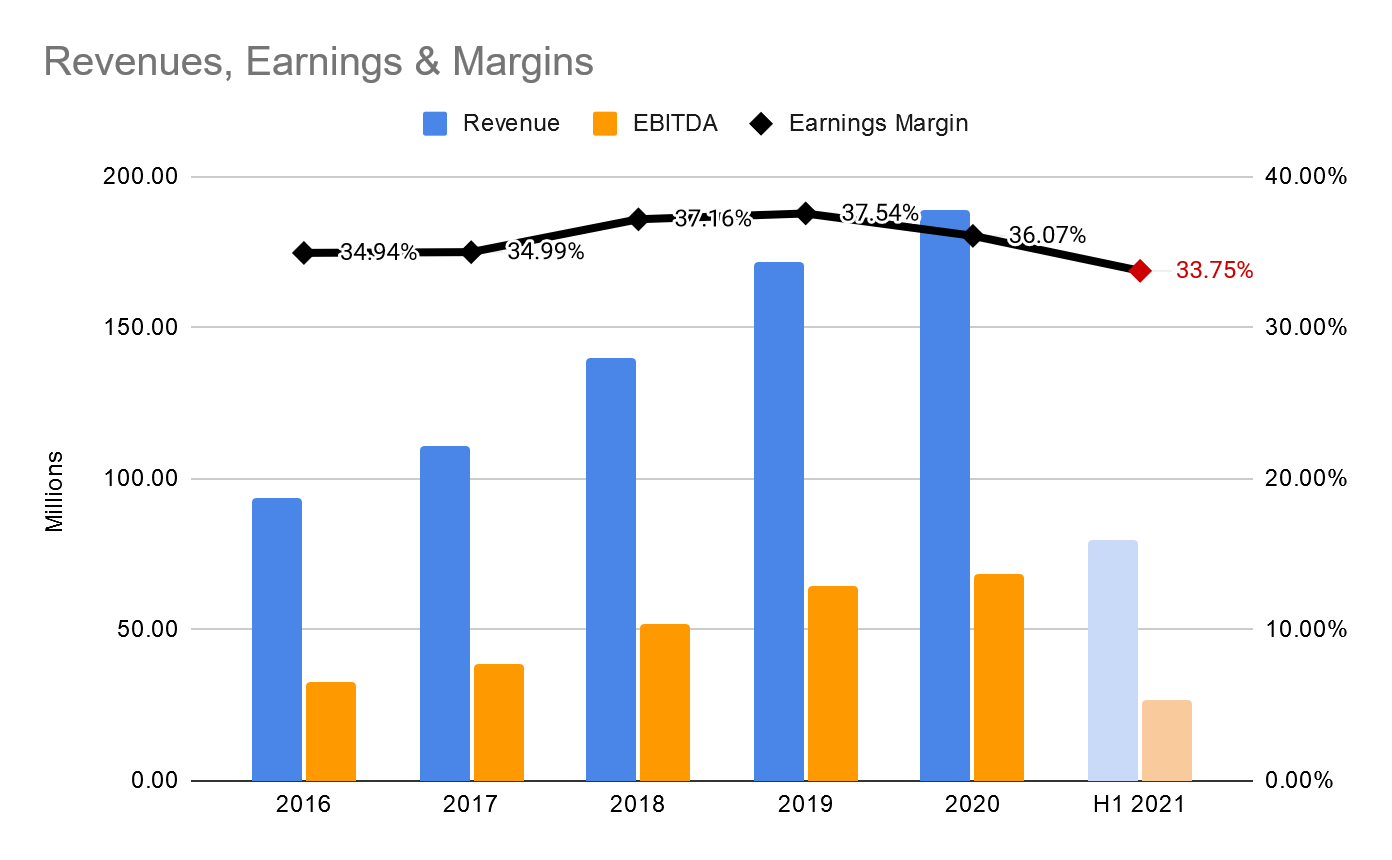 The balance sheet of Altium is rock solid. They have $88.5 million in cash and equivalents as of the end of the half year. The total current assets exceed the total current liabilities by 2.12x – signifying a very healthy short-term financial position. In the long-term, Altium is demonstrating a higher degree of strength in the long-term. The total assets exceed the total liabilities by 2.89x. Altium has just $13 million in debt. The capital structure is very strong with 93% equity and only 7% debt.

Altium has had a good trend in terms of dividends as well. The total dividend paid out has consistently increased over time. Given that this is a growth company with a lot of top line growth that is still expected, the dividends are just an added bonus to investors. The interim dividend announced for FY2021 is 19 cents a share. The cash conversion rates show that 46% has been paid out as dividends. The working capital has been considerably increased by 28%. 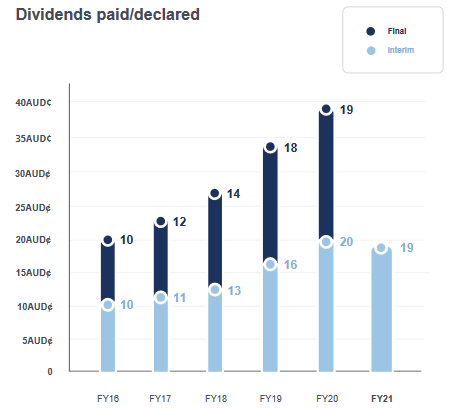 Altium’s share price has taken a bit of a hit and today’s reaction in the market means that it has slid over 4% on the back of an earnings report that was expected. We are expecting some volatility in the next few weeks as the market comes to terms with the downgrade. The management is treating the financial year as a recovery, however, the metrics for the adoption of Altium 365 has been very strong. There is a lot of room for growth and the pivot is aimed with a vision of total market domination in the PCB market. With the consolidation, Altium is a “Buy” recommendation for long-term plays.