No significant update during Q1 of FY2021. The firm is on track to meet its guidance forecasts. We continue our "Hold" recommendation.

Alkane Resources Ltd (ASX: ALK) is a relatively small gold producer. However, it has multi-commodity exploration and development projects in its portfolio. Our initial coverage of Alkane was on the 23rd of September at a price of $1.49. Fast forward 6 weeks and the stock is trading at $1.255 – which is down about 15%.

Gold prices have stalled in recent weeks and all the momentum that carried gold stock on the ASX look to have subsided as well. Quite a few stocks have had corrections and they are now closer to at their fair value than they were before. However, given global economic uncertainty, gold prices are forecasted to be stable for the near future.

Since our last report on Alkane Resources, the firm has announced a performance review of Q1 FY2021. This has been quite the catalyst along with the stalling of gold prices for the 15% dip in stock price. Tomingley Gold Operations commenced in 2014 and is the firm’s largest project. Tomingley has 4 gold deposits – Wyoming One, Wyoming Three, Caloma, and Caloma Two. In 2019, open cut mining was started that is producing 60,000 – 80,000 ounces of Gold per annum. The total operating capacity of Tomingley is 1Mtpa.

The Roswell and San Antonio deposits are awaiting approvals from the NSW government to begin development, and the firm has announced that the process has begun, and community consultation is in process.

The December quarter will most likely see the preliminary mine plans for the Roswell and San Antonio deposits. Considering we see a successful addition of these deposits; the Tomingley Gold Operations will be extended and will have a total resources capacity in excess of 1 million oz. 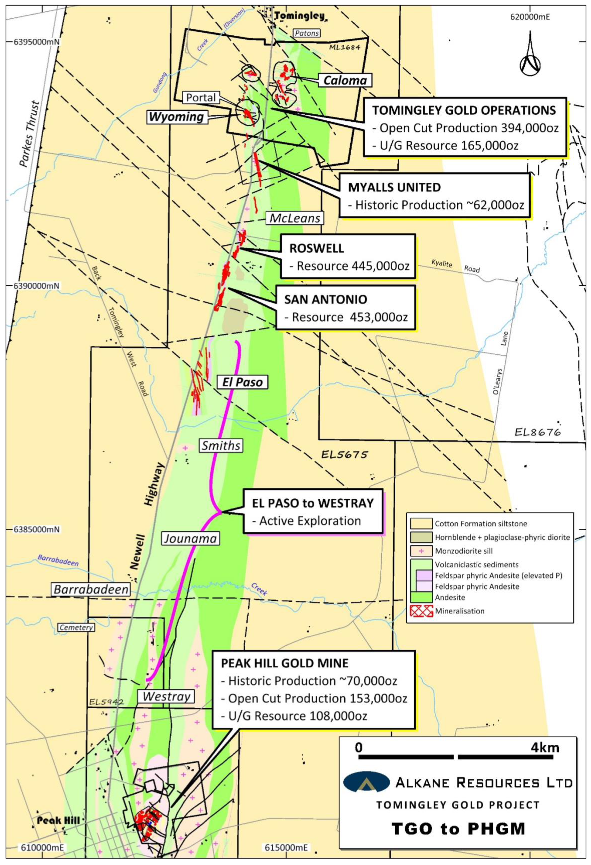 Alkane has begun discussions with Macquarie Bank for the provision of a A$20 million debt facility for working capital needs. Discussions are underway and we await an update to be made by Alkane. The cash position during the quarter has decreased. It now stands at A$33.1 million. Listed Investments and Bullion stand at A$54.2 million and A$4.7 million, respectively. The demerger from Australian Strategic Materials (ASX: ASM) resulted in the transfer of $18.5 million in cash to ASM. The below picture gives us an idea of the inflows and outflows during the quarter: 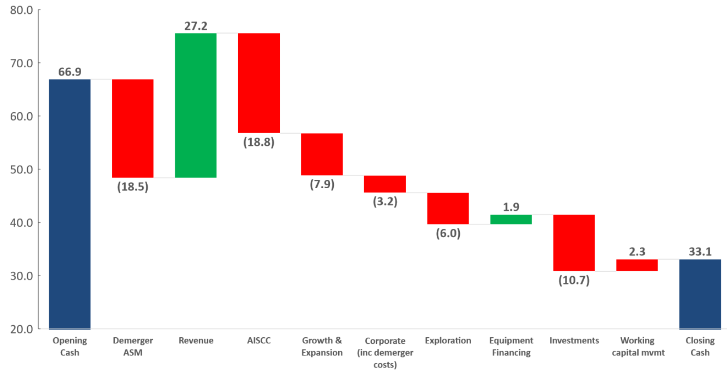 Not much has changed for Alkane Resources in the September quarter. The meeting of guidance forecasts means that the firm is on track. Tomingley Gold Mine currently provides the revenues for Alkane. The expansion potential with the Roswell and San Antonio deposits would increase the production capacity. In addition to this, the firm still has quite a few projects in the exploration stage.

The Tomingley Extension Project comes with the below potential:

Alkane is following up on the drilling in Boda and an update on the Roswell and San Antonio extension is expected in Q2 of FY2021. There is quite a long way to go for Alkane Resources to become a multi mine Australian gold producer.

Since our last update, there has not been any significant changes in the fundamentals of the company. The only expected big announcement in Q2 is the preliminary mine plans for the Roswell and San Antonio expansion. We continue to recommend members to “Hold” their positions.