Adairs has had a fantastic result. We recommend members to "Buy" given the high dividend and tailwinds in the ecommerce industry.

Adairs Limited (ASX: ADH) prides itself as a speciality retailer of homeware and furnishings. They are headquartered in Melbourne, have been around since 1918 and operate in Australia and New Zealand. Adairs is Australia’s largest omni channel retailer in their space. They operate under brands – Adairs, Adairs Homemaker, Adairs Kids, Urban Home Republic, and Mocka, New Zealand based furniture company that caters to baby, kids, and nursery products and now home furnishings. Adairs acquired Mocka in December 2019 and the acquisition has largely been a hit. Mocka increased revenues through online channels for Adairs.

Adairs has a total of 168 stores in ANZ region. In FY2021, they closed 2 stores at Burnside and Bondi, and opened 3 new stores at – Belmont, Warrigul, and Botany. Online retail has been the biggest catalyst for the performance of Adairs throughout the pandemic. They have offset the losses incurred in the lockdowns due to store closures. The number of online transactions has also increased as online spending continued during the pandemic. Both Adairs and Mocka have benefitted from the growth in average selling price of their products of late. The group’s sales also been broken up by channels in the below chart: 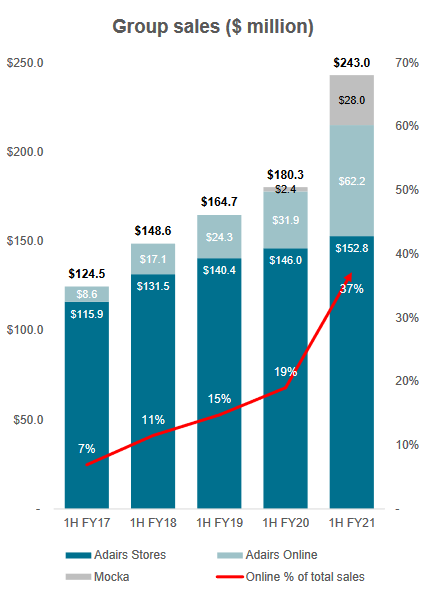 As can be seen in the above chart, the top line performance has been very positive for Adairs group. Adairs online and Mocka have seen high growth rates in sales. Sales through the online sales channel has been consistently increasing over the past few periods and given the change in consumer behaviour during the pandemic, the shift to online retail has accelerated.

Much like the company’s sales, Adairs’ stock price has performed magnificently since March 2020. The one-year return stands at 56% despite a stall in gains since late November. Compared to the ASX 200 benchmark (orange line), Adairs has outperformed the index since August last year.

The stock price surge had stalled in July as Adair’s FY2020 full year performance report was due. Since there were a lot of positives in the second half of the financial year, Adairs reported record revenues and record net profit after tax – raising investor hopes and sentiments for the online retail play. 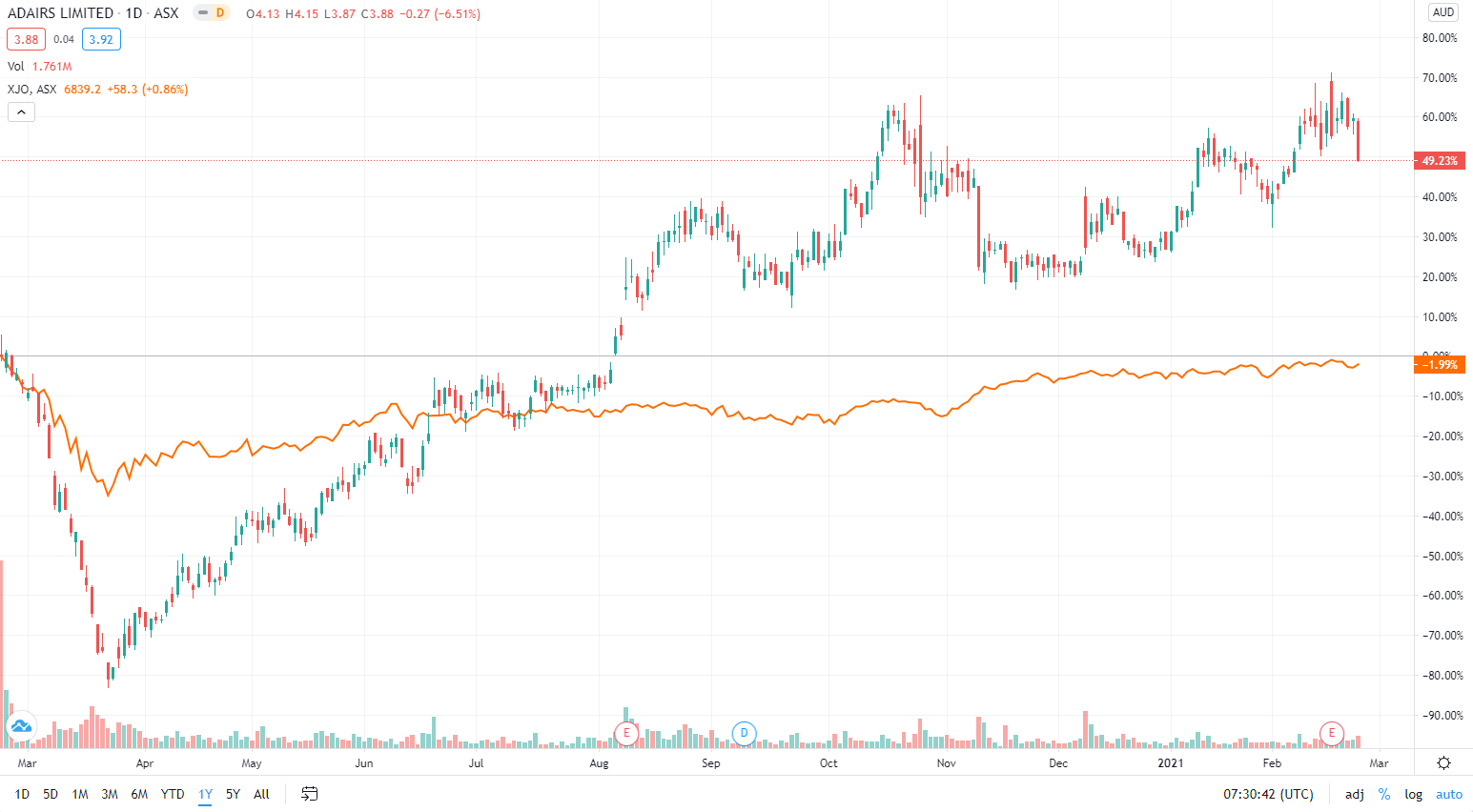 The company has also reported a hike in gross margins across Adairs and Mocka. This is due to the strategy that has been put in place by the firm. Adairs launched their loyalty program for $19.95 for two years wherein members are offered exclusive discounts and free shipping and returns, etc. This has largely turned out to be a hit, with membership now sitting at 900,000 customers. The second half of the FY2021 is to have started strongly as per the firm. The first 7 weeks of the period has resulted in the total sales rising as online sales and Mocka sales have continued to grow.

Adairs and Mocka, both design and make their own products. They have worked on aligning their products to consumer tastes – resulting in customer love and justification for their premium price tags. Given that Adairs is a premium brand and has a large fan following, the growth in retail stores will always be a cornerstone for the firm to drive sales. They also have relatively less competitors in this niche space that they operate in. Bed Bath and Table is the only real pure play competitor that Adairs is up against.

The ecommerce industry is booming and the brick-and-mortar retailers who have adopted ecommerce have been performing exceptionally well throughout 2020. Australia has been seeing massive growth in the ecommerce industry. Current estimates suggest the industry brings in overall revenues of around $34 billion and it has been growing at over 13% annually. While this high growth rate is not sustainable in the long run given the population of Australia, it is still safe to put the industry growth to be around 10% CAGR for the next 5 years. The shift towards online retail in New Zealand has been far more robust than it has been in Australia.

We will also witness an overall expansion of the ecommerce industry with the integration of newer technologies. For instance, the emergence of BNPL (Buy Now Pay Later) has added long-term tailwinds to the growth in ecommerce. The catalysts for growth in the industry will be led by:

The niche homeware retailing market is a subset of the overall retail sector, and its growth rates are not as high as other industries such as consumer electronics retail. Operators in this landscape have often faced a challenging economic landscape in the recent past. The simple reason here would be – a person who owns a house will have far fewer bedsheets than he would shirts/trousers.

The sector is estimated to be bringing in revenue of just over $2 billion and it is estimated to grow at about 2% CAGR over the next 5 years. The positive growth is a reflection on the increase in consumer discretionary income over the same period of time. The profit margin in the industry is also relatively low at 6%. However, Adairs being a luxury brand can demand higher prices and hence, higher profit margins.

Adairs had 43 of their Melbourne stores closed for close to half the period in H1 FY2021. However, the firm still reported a growth in group sales of 34.8%. The total revenues earned during the period was $243 million, out of which $90.2 million can be attributed to online sales.

The retail pricing initiatives undertaken by the firm, along with reduced markdowns and promotion days resulted in an increase in gross margins to 67.8%. The operations cost for Adairs reduced during the period due to the initiatives and also due to the firm benefitting from:

These benefits have offset the increased investment in marketing costs to drive brand awareness and increase sales through existing channels by targeting customers. Another unstated benefit is the increased margins from online sales. Online sales do not require fixed costs that are usually associated with store retail. 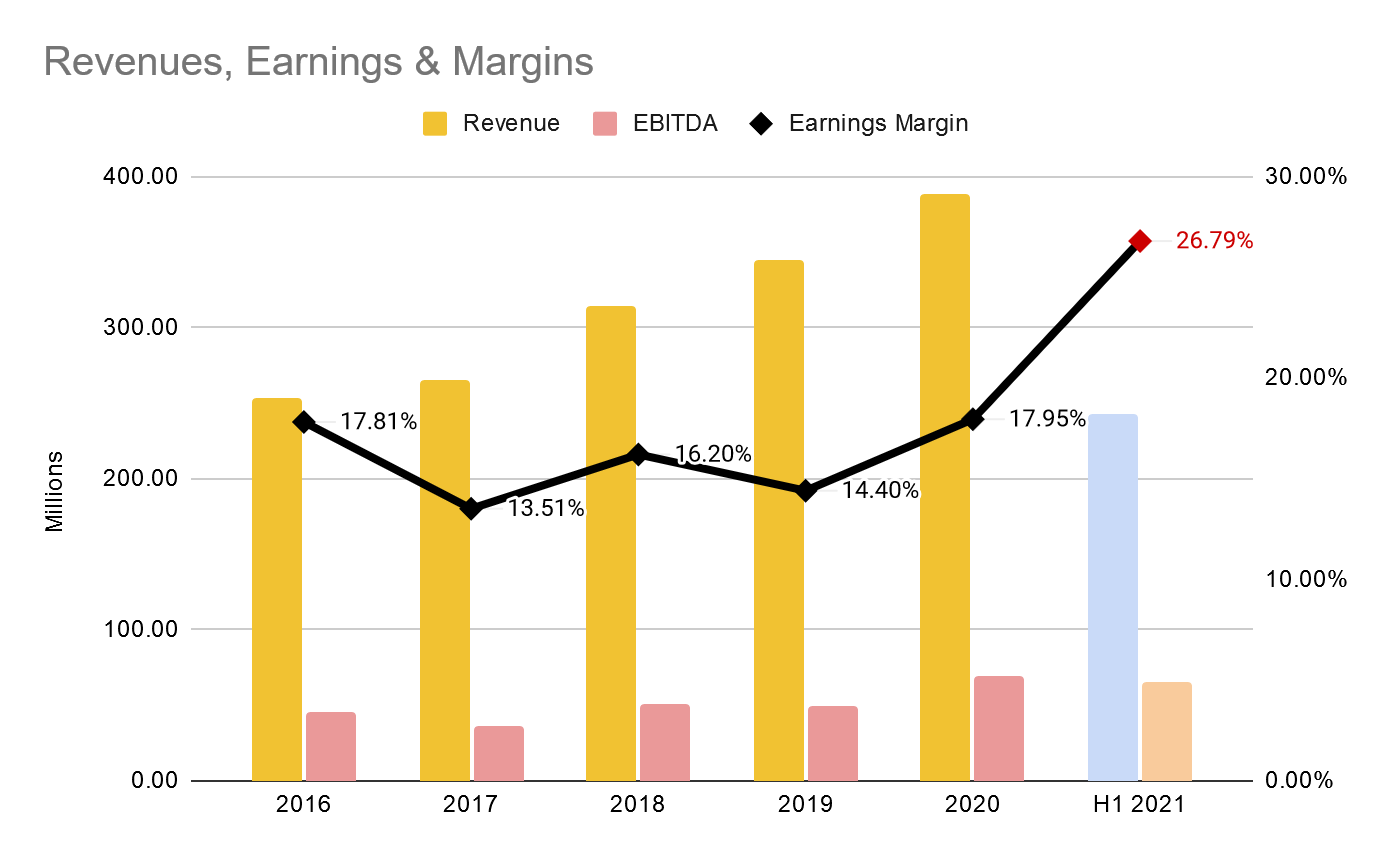 Adairs inventory increased to $46.9 million as demand has surged during the period. 22% of this stock is expected to be in transit at the end of the period. The current stock levels are going as per plan as stated by the firm. Mocka’s inventory has increased to $20.3 million, and 42% of the stock is in transit. The improvement in stock on hand is said to be in line from the end of February 2021. The stock flow from China and SouthEast Asia has been inconsistent as supply chain disruptions plagued the region.

The cash position of the group is $22.1 million. Adairs also holds $90 million of term finance facilities available until March 2023 for unforeseen circumstances. In September 2021, an earn-out payment is due to Mocka vendors. An estimated $14.8 million – $16.7 million will be due then – reducing the profitability of the firm. 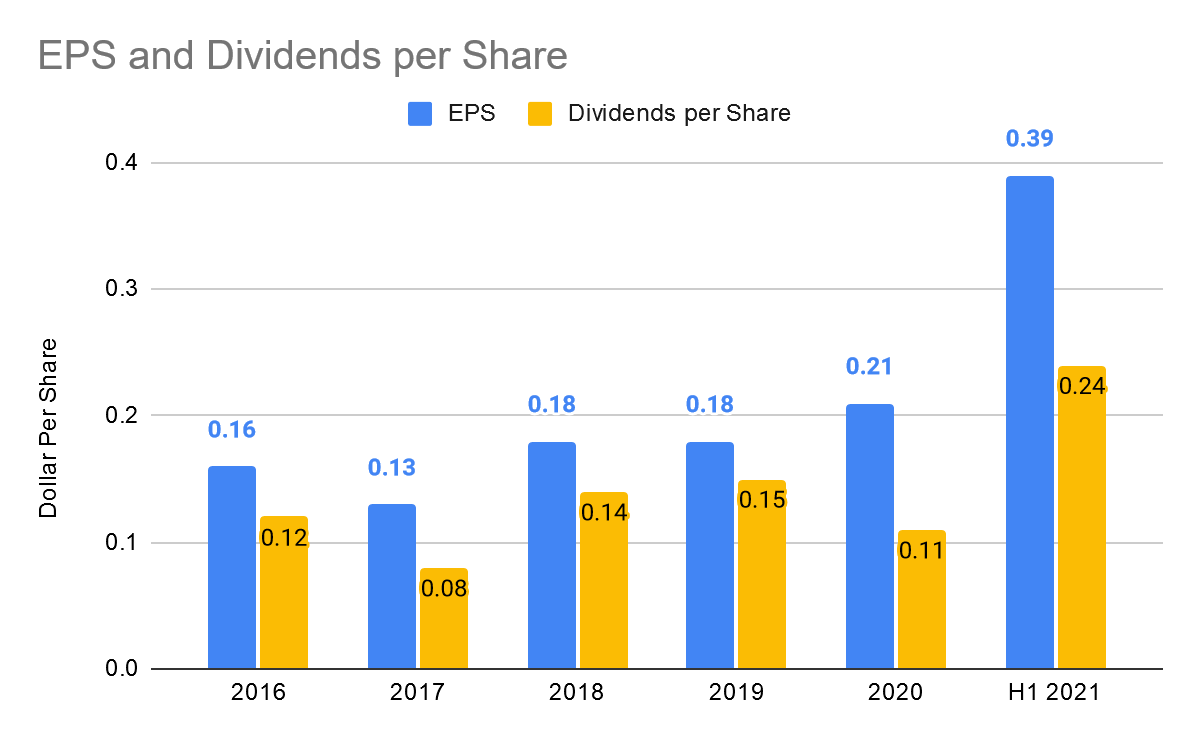 Adairs has $116 million of debt in its balance sheet. The short-term financial health of the firm does raise some concerns they have current liabilities worth $137 million. The undrawn debt facilities do offer a degree of comfort to investors. In the long run, however, the finances look secure. Total assets exceed the total liabilities by 1.63x. The capital structure of Adairs shows 57.9% equity capitalisation and 42.1% debt capitalisation. 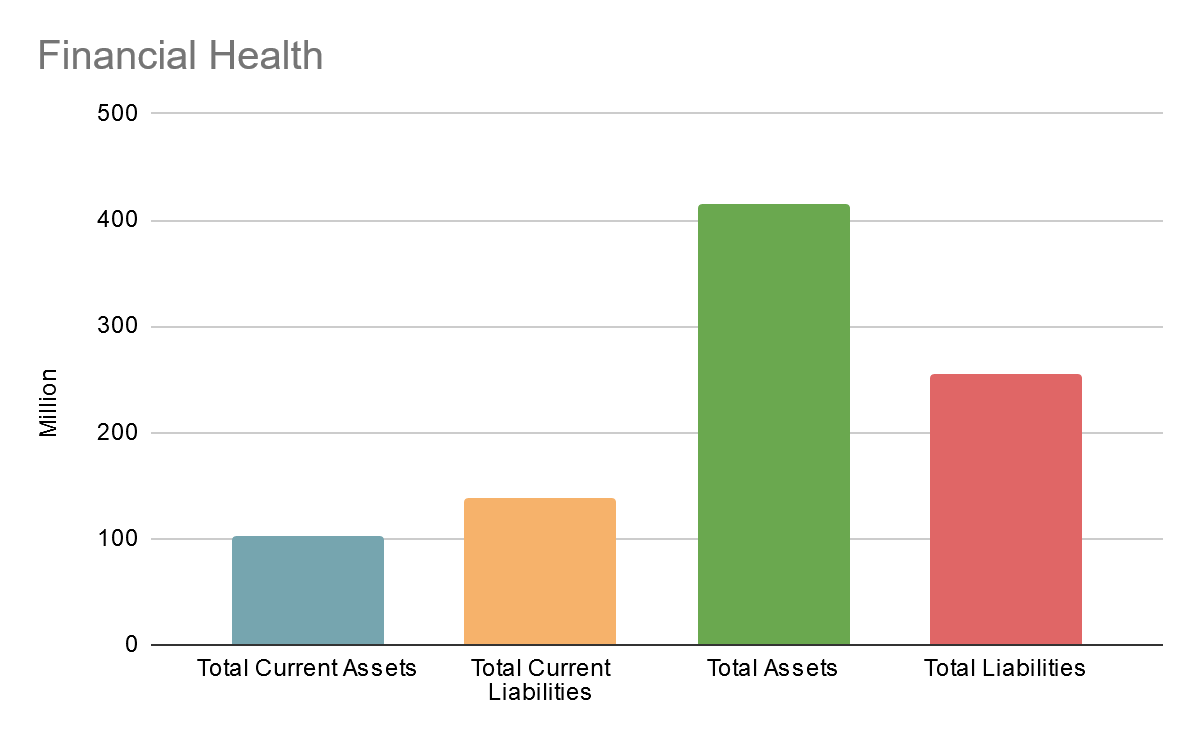 Adairs is expected to open 1 or 2 new stores in the second half of the year, and also upsize 3-4 existing stores across ANZ. The capital expenditure is expected to be in the range of $13 million – $15 million for the full financial year.

Adairs has had a very positive performance in the first half of FY2021. The growth is extremely sensitive to consumer sentiment around discretionary spending. The government’s decision regarding the extension of the JobKeeper program beyond March will be crucial to the continued growth story of Adairs. Higher growth in sales from Mocka is something we would like to see when it comes to sustainably increasing growth in Adairs group. We recommend investors to “Buy” given the high dividend yield and industry tailwinds.