Allkem Ltd (ASX AKE) is an ASX-listed mineral resource stock. It was formerly known as Orocobre Limited (ASX: ORE). The company was listed on ASX in 2007 and is headquartered in Brisbane.

The company has lithium and other mineral resources as key assets around the globe – lithium carbonate and boron resources in Argentina. Additionally, Allkem operates a hard-rock lithium operation in Australia and has a large-scale lithium hydroxide facility in Japan. This is the most extensive lithium processing facility in Japan. The company expects that the project will help them convert lithium carbonate to lithium hydroxide on a large scale.

Allkem has also inked a deal with Toyota and become a pioneer in constructing a brine-based lithium facility. Toyota also holds a high stake in Allkem.

Allkem’s other vital assets are Olaroz, Cauchari Lithium Project, and Naraha lithium hydroxide plant. Allkem is thus a significant producer of lithium and has different clients in the industry. The company claims that they are the most prominent global lithium producer and provides lithium at the most competitive rates. 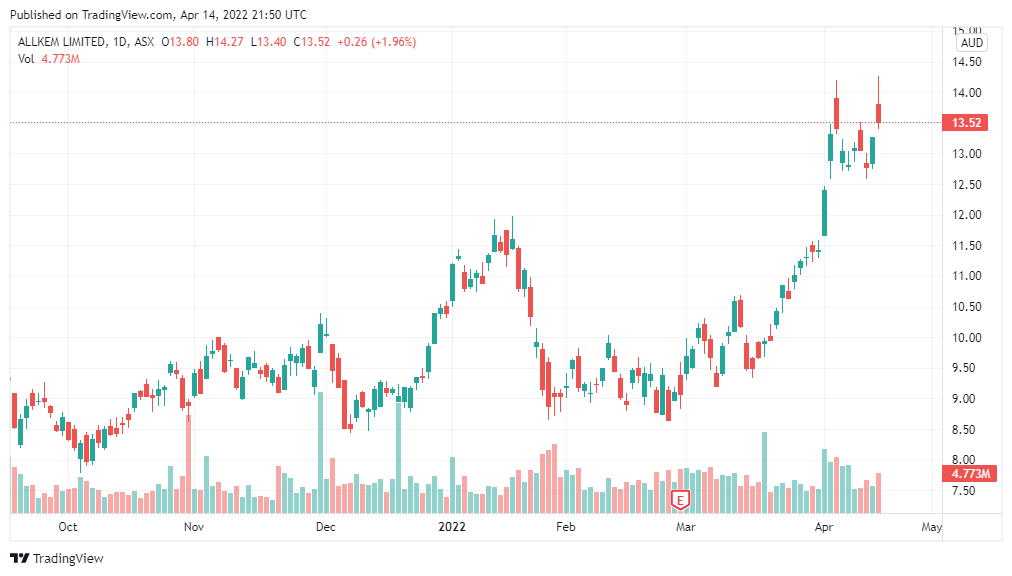 Why did AKE stock set a new 52-week high?

AKE stock is currently trading at $13.52 after hitting its 52-week high and has given a return of 118.7% to its investors in the trailing twelve months.

There are a couple of reasons for AKE stock to hit its 52-week high today. One is its financial update, and the other is the surge in lithium prices.

The main contributors to the company’s revenue were Mt Cattlin and Olaroz Lithium Facility.

In the March quarter, Mt Cattlin produced 48,562 dry metric tonnes (dmt) of spodumene concentrate and delivered 66,011 tonnes. Based on an average price of $2,178/DMT, it generated a record revenue of US$143.8 million.

The Olaroz Lithium Facility produced 2,972 tonnes of lithium carbonate with sales of 3,157 tonnes. An average price of $27,236/tonne generated a record income of $86 million.

The other reason for the surge in the AKE stock price was the increase in lithium prices. US$2,178 per dry metric tonne of lithium is currently the worldwide going rate.

Through the third quarter of March 2022, the high demand for lithium chemicals and spodumene concentrate that began in 2021 has persisted.

For the March 2022 quarter, EV sales were forecasted at 2 million units, an increase of 70% over the same time in the previous year. Since last year’s March quarter, the number of electric vehicles (EVs) sold in China has increased by more than 150 percent. The number reached 1 million units in the third quarter.

Because LFP batteries (lithium, iron, phosphate) accounted for more than 55% of the country’s battery chemistries, China’s demand for lithium carbonate remained high during the March quarter.

The electric vehicles market is expanding rapidly, and the company being a major player in lithium production, is benefiting from this growth. Allkem has significant investors on board, such as JP Morgan and Toyota, making it the most trustable lithium stock on ASX.